This article deals with the painter van Eyck. For other bearers of this name see under Eyck .

Man in a Red Turban (1433; Self-Portrait?), National Gallery of London 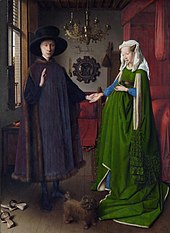 Madonna in the Church (1426), Gemäldegalerie Berlin

Jan van Eyck (* around 1390 in Maaseik ; † 1441 in Bruges ) was a Flemish painter of the late Middle Ages and is considered the founder and at the same time the most famous representative of ancient Dutch painting . He initiated the new naturalistic art epoch north of the Alps . Because of his perfect painting technique and his sense of realistic representation, many authors have even referred to him as the “king among painters”.

The artist was born around 1390 in Maaseik, a small town 25 km north of Maastricht . Despite intensive research, his youth is in the dark. Although the source situation improves from 1422, there is still a lack of knowledge about his works. To make matters worse, a large part of his work is no longer preserved. With whom van Eyck apprenticed is unknown. He made his early works in the style of an illuminator . He was first mentioned in a document in 1422, when he entered the service of Duke Johann of Bavaria , the Count of Holland. His position was that of a valet (French valet de chambre ), and from then on he worked as a court painter for the painting of the inner courtyard of the residence at The Hague .

After the Duke's death in 1425, van Eyck found employment with Philip the Good . His reputation as a painter had brought him to what was then the most splendid court in Europe, namely to Lille, because because of his abilities he was “of which the Duke had heard from people in his service, and of whom he, too, in the person of Jan van Eyck recognized “, has been discontinued. His contract was limited to one year, but the extension clause meant that van Eyck spent many years at the court of Philip III. stayed. His area of ​​responsibility was not limited to painting portraits and decorating princely residences, but was also responsible for the design of elegant court clothes, jewelry for festive ceremonies or for the organization of tournaments and other festivities. Other tasks included painting signs, banners and setting statues.

In addition to painting, Jan van Eyck also fulfilled diplomatic assignments. Philipp sent him on several trips abroad within ten years. During one of these missions he took part in a festival of St. Luke on October 18, 1426 in Tournai . It is believed that it was here that he met the artists Robert Campin (?), Rogier van der Weyden and Jacques Daret . In 1427 he traveled to Valencia, after which he belonged to a delegation to Portugal (1428), which stopped in Philip's name for the daughter of King John I , Isabella . Jan van Eyck painted the Infanta so that his master could get an idea of ​​his future bride. From 1430 until his death he worked in Bruges again.

Undoubtedly his main work is the Ghent Altarpiece from around 1435, which he is said to have started with his supposed brother Hubert van Eyck . This polyptych is a masterpiece of fine painting and the largest known work of Old Dutch painting. From this time on he also worked for private clients. For the Chancellor Nicolas Rolin he painted a Madonna with the praying donor of the picture as her counterpart, depicted in the style of a 'silent devotion'. For the city of Bruges he created six gilded statues that were intended for the facade of the town hall. In 1433 he married Margarete and bought a house in the court and embassy district of Bruges. Philip the Good showed the artist his respect by sponsoring one of Van Eyck's two children. In 1436 he went on his last secret mission. After sixteen years in the service of the Duke, van Eyck died in Bruges in 1441, where he was buried on July 9th in the church of Sint-Donaas .

History of the Ghent Altarpiece 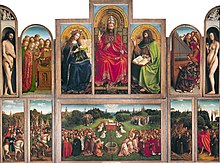 Ghent Altarpiece : In 1934 the panels with the Just Judges and John the Baptist were stolen. The latter was returned. However, a ransom of one million Belgian francs ( € 24,789 ) was demanded for the far more valuable Just Judges , probably from Arseen Goedertier . Since the sum was not paid, there was no return. The picture is still lost.

His most famous work is the monumental Ghent Altarpiece .

An inscription that Hubert van Eyck called the creator and greatest painters, Jan van Eyck, however called the Second in art, who had finished the work, is on the framing of the Ghent Altarpiece.

The painter Hubert Eyck, the greatest who ever found himself, began this work, and his brother Johannes, second in art, completed the difficult task, following the request of Joos Vijd. With this poem he allows you to see what has been accomplished on May 6th.

For generations, various art historians interpreted these lines as contemporary, until an X-ray examination in 1950 suggested that they should be viewed as an afterthought. When Albrecht Dürer visited the altar in April 1521, he stated: “On Wednesday morning they took me to S. Johannes thurn; then I saw the great, wonderful place, in which I was immediately looked at. Then I saw John's table; that is a delicious, highly sensible choice, and especially Eve, Mary and God the Father are almost good. ”He did not mention an inscription. The author Hieronymus Münzer also did not report anything about Hubert in the first reliable source from 1496, in which the altar is mentioned .

In 1995, in his study on the Ghent Altarpiece, Volker Herzner put forward the thesis that Jan van Eyck was the sole creator of the altar, which van Asperen de Boer saw confirmed in 1979 by X-ray reflectograms of the signature. Due to more recent findings in the course of the renovation, which has been ongoing since 2012, some art scholars, in contrast, take the position that there is no reason to doubt the authenticity of the inscription on the first version of the frame and thus Hubert van Eyck's involvement.

With the works of Jan van Eyck, Robert Campin and Rogier van der Weyden , a new era of painting begins , which is characterized by lovingly realistic detailed descriptions. Since in many cases there are images of religious content in which saints are depicted, the realistic depiction brings “the sacred into the house” and enables the viewer to gain new direct access to the religious.

A new era also began in terms of painting technique with van Eyck. In addition to the traditional tempera and water-based glue paint systems, he also frequently used oil paints . Giorgio Vasari described Jan van Eyck as the inventor of oil painting , which is incorrect, because oil resin painting was also known earlier, for example in the Strasbourg painter's book (if this manuscript, as Ernst Berger suspected, can be dated as early as 1400) and in the Barrel painters, i.e. those who gilded or painted wooden sculptures (etymolog. Meaning of 'to grasp' = to enclose). Jan van Eyck, however, was probably the first painter to use siccative and bleached oils (for corrections), to show the potential of oil painting through its new colourfulness with its varied nuances within panel painting, and to also apply it to a greater extent. His works were fundamental to overcoming medieval traditions in European painting and can be found in all major museums.

"Image title" sorts the secular images on top, then the religious themes.

See also: Woman at the toilet , received as a copy

Jan van Eyck noted his signature with the year and the addition 'als ixh xan' in German in the hollow of the frame in the middle altar of the Dresden Marien Altar: as best I can .