This article is about a paint. For the Italian film composer and keyboardist see Vincenzo Tempera . 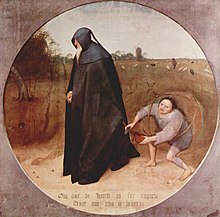 The misanthrope , tempera on canvas, Pieter Brueghel the Elder Ä. , 1568

Real tempera paints are seldom on the market as finished tube paints , as they spoil very easily and can only be preserved to a limited extent with the use of strong preservatives ; this is especially true for casein tempera. Normally, you therefore make your own colors from pigments and an emulsion.

Tempera is differentiated according to the type of aqueous emulsion component, for example casein, egg, starch or ( wax ) soap tempera . In art, egg tempera or casein tempera was and is predominantly used. These are insoluble in water, while the tempera with a gum arabic emulsion (gum emulsion) is soluble.

As oily phase are drying oils ( linseed - Poppy -, walnut - and sunflower oil ), whose stand oils , produced from these paints , alkyd resin , resin solutions , turpentine and wax used. Other additives , which are highly controversial because of their technical painting properties, include honey and soap , which are used to increase emulsifiability.

A fundamental distinction is that between fat and lean tempera. All types of tempera can be grated either fat or lean. In the case of a rich tempera, oil predominates in the binder emulsion, that is, tiny watery beads of glue float in the oil. In the lean tempera, globules of oil float in watery glue. After the water of the emulsion has evaporated, an oil film with holes remains in the places where the water was in a rich tempera. With a lean tempera, small balls of oil remain on the canvas . Painting medium for fat tempera is therefore also oil, for lean tempera water.

Tempera paints dry relatively quickly compared to oil paints, but this only in the sense that the paints can be partially reworked after the water has evaporated quickly, but like oil paints, they first have to set slowly. The oil that remains after the water has evaporated has to oxidize in order to be able to bind the pigments. This happens faster than with oil paints , because the surface of the oil network or the oil globules is larger than that of the closed oil film of the oil paints.

Lean tempera is therefore dry after the water has evaporated and can be reworked, whereas fat tempera behaves more like oil paints, so it stays “wet” longer.

The advantages of tempera painting are resistance to aging , quick drying and the fact that the colors can continue to be applied without lengthy drying phases ( oil painting ). Early shrinkage cracks ( craquelure ), which can occur in oil paints, are rare in tempera painting. The reason why oil paints crack is because the oil expands as it oxidizes. In the case of tempera paints, this increase in volume of the oil has no consequences; the oxidized oil expands into the cavities that the evaporated water has left behind.

The disadvantages of tempera painting are that their application requires technical knowledge and painterly experience from the painter. In the case of egg tempera, the paint is applied using "dotted lines" and in several layers. This is time-consuming and labor-intensive, and smooth, imperceptible color transitions are difficult to achieve. Only the Plaw technique known in Russian icon painting for the color transitions in faces allows fine and imperceptible shades, influenced by the optical results of oil painting; but it is extremely difficult to master technically. Oil paints, on the other hand, allow the colors to be rubbed into one another and thereby create smoother transitions. With the Plaw technique, too, the colors are gently rubbed together.

Another disadvantage is the visual change in colors when painting. While the oil colors look almost exactly the same when they are painted, the tempera changes more. After the water has evaporated, the colors appear stronger, lean tempera appears powdery, pastel-like and changes significantly with the varnish , similar to pastel crayons . These changes depend heavily on the type of tempera used, fat behaves differently than lean, casein tempera different than egg tempera . Egg tempera images, for example, were exposed to the sun so that the yolk's own color faded. That required experience from the painter, he could not just paint what he saw. The problem also arises with acrylic paints , the acrylic binder is cloudy with a bluish tinge, it only becomes clear when it dries. Acrylic and tempera paints therefore appear much “cleaner” after drying.

In addition, for many types of tempera the color is brittle, which means that the colors can only be used to a limited extent on flexible picture carriers such as canvases. In the case of casein or quark / pot tempera, high surface tensions can also arise, which, for example, are sufficient to warp image carriers (e.g. made of wood).

Another disadvantage is the short shelf life of the finished emulsion. The colors spoil very quickly and must therefore be rubbed shortly before processing. Storage is hardly possible.

The earliest surviving tempera paintings include some of the mummy portraits found in Egypt ( Fayyum ) . Tempera painting replaced encaustic (hot wax painting), which was widely used in antiquity and late antiquity . It stands at the beginning of European panel painting . Giotto ( 1267 or 1276 - 1337 ) and his school used a pure egg tempera , the technique of which has been handed down to us in detail in the "Treatise on Painting" by Cennino Cennini (around 1370-around 1440). The modern scientific study of paintings also confirms Cennini's statements. The transition to oil painting was slow and gradual. In the course of the 14th century, the garments were occasionally painted with a drying oil, preferably walnut oil, while the incarnates and the other colored areas were painted in traditional egg tempera. Even in the 15th century there were still many known and unknown masters in European panel painting who worked in pure tempera technique, while others used both tempera and oil or egg yolk / oil emulsion. The so-called pearl effect on signatures, lights, smaller areas of color and contours, which indicates the use of an aqueous binder, can even be detected in paintings from the 17th century.

In Eastern European art, tempera was first used in wall painting by the Tarnowo Art School , which then quickly spread to the rest of the Orthodox world. The disadvantages mentioned above, together with the fact that it is very easy to achieve soft color transitions with oil paints, but also similar effects as with tempera, led to the fact that oil painting slowly replaced tempera. Only in traditional icon painting has egg tempera remained the preferred technique to this day. At the same time, canvases, as large, light and not prone to cracks, but rather poorly suited for tempera painting due to their flexibility, replaced the previously common wooden panels. The displacement of tempera painting by oil painting took place from the 15th century and began in the Netherlands. One of the first and best-known painters who switched from tempera painting to oil painting, but also mixed and used both techniques in parallel, is Jan van Eyck , who is occasionally even referred to as the “inventor of European oil painting”, which is undetectable and hard to maintain . Especially for background painting, the preliminary stage of paintings in the multi-layered oil- resin painting, and for sketches, many generations of painters have still used tempera, including Peter Paul Rubens .