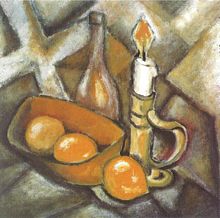 The egg tempera consists of water-thinned egg yolk as a binding agent and a pigment ( tempera painting ). It is considered the "classic" tempera. Their beginnings can be found in early European panel painting.

Tempera was already used in ancient times ( mummy portrait ), whether this is also the case for egg tempera is uncertain. It is considered the oldest technique for producing paints and binding them on a picture carrier. For European panel painting, Giotto di Bondone (1267 / 1276–1337) and his school in the 13th century reformed the ancient tempera, which originally consisted of wax and fatty oils, by mixing the pigments only with water-thinned egg yolk. This process had a revolutionary effect and was used almost exclusively by Italian artists until the 14th century. Today it is only used, with a few exceptions, in icon painting and occasionally as an underpainting in panel painting.

The original, classic egg tempera consists of egg yolk and water. It is described in detail in the "Treatise on Painting", including its application, by Cennino Cennini . Later it was varied by the artists and z. B. made from one part egg (egg white and egg yolk), 1 part linseed oil and 1 part water, used as a painting medium turpentine oil or a dammar solution.