This article covers the topic in general. For camouflage in animals see under camouflage (biology) .

Camouflage through camouflage clothing in the military

Camouflage aircraft by adjusting the background 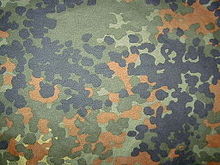 Flecktarn pattern of the Bundeswehr

Camouflage is used to change the appearance of an individual or something in such a way that they can no longer be recognized or only with difficulty. This is done, for example, with the help of camouflage clothing with camouflage patterns as well as immobility or movement lines adapted to the terrain, in order to use them against view by natural shadow formation. In the military, camouflage and deception are used in a broader sense .

Camouflage is done by:

Optical camouflage
Through camouflage colors , use of the terrain, lack of exercise, avoidance of lifting off the background and breaking up of one's own optical silhouette, etc. a. also through jute stripes on the helmet cover or changes in shape like with a Mitznefet of the Israeli army. In addition, smoke grenades and smoke throwers also serve as camouflage, in order to take away the view of the enemy in order to combat their own forces.
Acoustic camouflage
By avoiding or masking sounds by superimposing them on other natural sounds.
Odor camouflage
Also olfactory camouflage . Avoiding spices, aftershave, cigarette smoke.
Thermal camouflage
Shielding of body heat and radiation from devices by using the terrain and using special clothing or cover. For example, a very thick plastic film helps against a thermal imaging device to shield the body's heat signature.

Especially in the case of larger objects such as warships or fighter planes , camouflage should not only prevent detection as such, but also make it more difficult for the enemy to determine size, type and speed.

Substantially in the optical camouflage which is Umtarnen depending on varying background. In winter, winter camouflage clothing is useful on open, snowy terrain, but makes the soldier visible when entering the dark forest. Green tufts of grass in camouflage helmet cover are useful in a lush meadow, but noticeable in a harvest-ready cornfield.

Examples from the hunt are the North American Plains Indians who wrapped themselves in bison skins when hunting buffalo in order to sneak up on the herds unnoticed. Scottish professional hunters developed the ghillie suit for the open highlands .

In the military , the term camouflage ( French for “deception, deception, camouflage”) is often used. Depending on the predominant surrounding color, z. B. the combat suits of the soldiers white (in winter) or dyed in earth and olive tones and thus less noticeable for the enemy. For the same reason, faces are blackened in nightly combat missions. Larger objects such as tanks or trenches are covered with nets and foliage to prevent detection from the air. Multispectral camouflage nets such as the SAAB Barracuda Mobile Camouflage System camouflage in several wavelength ranges, such as infrared (heat radiation), visible light and microwaves (radar). Defense measures against modern location methods such as radar or sonar are referred to as stealth techniques or stealth techniques ( English stealth camouflage).

Camouflage does not always have to go hand in hand with the usual camouflage colors and blurring of the outline as such. Bunkers and fixed gun emplacements can be camouflaged as ordinary houses, which means that they are clearly and easily recognizable as buildings, but are not a noticeable structure in the vicinity of settlements and cities or even integrated into them. Likewise, unauthorized persons, if they wear local clothing, z. B. a doctor's coat in a hospital, not recognized as quickly, even if they are seen doing it.

You can camouflage yourself through inconspicuous behavior (for example as a thief ) and by adapting to the movements or noises of the environment. Computer viruses and cancer cells camouflage themselves in a similar way .

Steganography describes the camouflaging of secret information in a communication , while the carrier of the information, the medium , does not have to have any further meaning. The security of secret steganographic information lies in the fact that an unauthorized person does not notice the existence of such information or, if he knows about the existence, he cannot recognize it.

From camouflage or lamination is when politicians suppress or, for example in speeches true facts top managers of large companies represent the economic situation of their company positively, although this is not true.