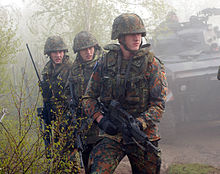 Soldiers of the Bundeswehr in camouflage clothing with the flecktarn pattern

Splitter camouflage pattern 31 of the Reichswehr (1931)

Usually camouflage clothing is adapted to a specific environment. However, camouflage patterns for universal use are also being developed, such as the Universal Camouflage Pattern or Multicam .

Until the 19th century, European soldiers went into the field in colorful and eye-catching uniforms. The colors were based at the time in many cases still to the Middle Ages arisen crest colors of the country gentlemen. The Grande Armée Napoleon, which was called from 1808 onwards , was dressed in the colors of the national flag. Due to the individual national appearance of their uniforms, it was possible for the soldiers to clearly differentiate between friend and foe in the battle.

Military camouflage clothing was only necessary in rare cases. In the Prussian army of Frederick II in 1740, a hunter corps was formed from the tribe of forest personnel for patrol duty and individual actions, which wore a siskin green skirt, yellow leather trousers and brown leather cartridge satchels. In practice, however, on special occasions one limited oneself to covering bare pieces of equipment with leaves or grass etc.

After the introduction of the low-smoke powder , the battlefield was no longer covered by clouds of smoke and it had become much easier not to accidentally shoot your own comrade. The development of long-range and fast-firing weapons , particularly the machine gun , also resulted in a change in tactics.

At the end of the 19th century, experiments were started with uniforms camouflaging in one color. The colonial and international conflicts that prevailed at the time took place mostly in tropical, dry climates. The prevailing natural conditions there often made approaching soldiers in traditional uniforms an easy target. In both Great Britain and the USA, after some experience in 1902, the traditional uniforms that had previously prevailed were replaced by new, khaki or sand-colored items of equipment.

Parts of the equipment or of colonial troops had already been equipped with opaque colors in many cases. At the same time, most modern field armies began to do without white horses as riding horses. Around 1900 the East Asian expedition corps of the imperial army received a tropical uniform in "earth-colored field gray". In 1907, field-gray uniforms with brown leather gear were introduced throughout the German army . During the First World War , most of the participating armies had changed their uniforms to camouflage colors .

Camouflage patterns were first used for uniforms after the First World War . The best known was the splinter camouflage pattern 31, which was introduced to the Reichswehr in 1931 , was imitated internationally and since then has been used in many variants to this day. The parachute troops of the Wehrmacht were outfitted with camouflage clothing, just as Italy equipped its paratroopers with camouflage clothing as early as 1937.

The German plane tree pattern - autumn color was specially developed for the camouflage clothing of the Waffen-SS from 1937 to 1945, and was the oldest flecktarn in the world that was produced in large series and consistently used in combat operations.

In 1942, the US Army began to study captured equipment from the Waffen-SS to determine its camouflage effect. Already in the summer of the same year, units of the US Army and Marine Infantry that were deployed in the Pacific were equipped with an American variant of the German Flecktarn . In order to avoid confusion, this was not used on the European theater of war.

One of the best-known camouflage patterns is certainly the USA's woodland pattern, an enlarged version of the ERDL (Engineer Research & Development Laboratory) pattern from 1948, which was already used in Vietnam. Nowadays, practically every army in the world has its own camouflage pattern, which is again a recognition value.

At the beginning of the 21st century, new digital camouflage patterns created with the help of computer-generated fractals appeared, such as the CADPAT of the Canadian Army, the Type 07 of the Chinese People's Liberation Army or the MARPAT of the United States Marine Corps .

A ghillie suit is a camouflage suit primarily used by snipers . It hides the shape of the human body and allows it to "merge" with its surroundings. As a rule, a ghillie suit consists of a mesh material, either in the form of a throw or as a two-piece design. In addition, existing camouflage clothing can be transformed into a ghillie suit with the help of colored jute strips up to 80 cm long. The strips are knotted or sewn on and, depending on the material, also shredded in order to achieve the desired camouflage effect.

Countries where civilians are prohibited from wearing camouflage clothing