Piano concerto with Constantin Sandu, 2007. Orchestra in the romantic solo concerto: multiple tutti parts of the strings in the orchestra, single wind instruments and percussion.

The instrumental concert (commonly called concert . Italian: Concerto ) was created in the Baroque period as a formal juxtaposition of solo instrument (s) and ensemble or orchestra in alternating artistic interplay of tutti (all) and solo . 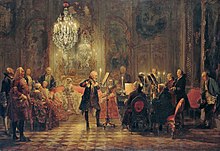 Adolph Menzel : Flute Concerto with Frederick the Great as a soloist. The accompanying strings are single, the (baroque) continuo (bass part) consists of harpsichord and violoncello; in this version (around 1750) also called “Concerto a cinque” (five-part concerto).

The instrumental concert (simplified “concert”) has developed since the 17th century into the compositional principle of the interaction of explicitly instrumental individual part (s) and instrumental vocal group (solo - tutti). Their relationship to one another changed over time. Originally, the variable term "concertare" was used to describe the making of both vocal parts and instrumental parts among themselves or together.

"The concerts have their origin from the Italians."

This is what Johann Joachim Quantz wrote about the concert in 1752 in his attempt to instruct him to play the flute traversière . Under the term Concerto , the instrumental concert had become the epitome of concert performance at the time of Quantzen .

The roots of concert

The roots of the term concertare (cooperate or compete, both expressions are used alternately) lie in the Italian polychoir of the 16th century. Andrea Gabrieli , Giovanni Gabrieli and Lodovico Grossi da Viadana named Concert as the sounding of both sung and instrumental groups, without explicit emphasis on solo. The so-called sacred concerts (e.g. with Heinrich Schütz ) were very broad with different vocal and instrumental ensembles and movements. Until the 17th century, pieces of music were rarely composed for specific voices / instruments. Often only the human voices soprano, alto, tenor and bass were notated; the choice of instruments was left to the performing musicians and was adapted to variable circumstances. After the four-part baroque string orchestra in Italy had formed the standard ensemble for secular music (e.g. opera) and church music, new tonal and technical possibilities arose. In the orchestras, which are often made up of amateurs, the professional musicians at the first desks took on the more difficult parts (“to avoid greater confusion”, says Giuseppe Torelli in the foreword to his op. 8); this resulted in the Concerto grosso with several instrumental soloists and the “modern” solo instrumental concerto. This was suitable for artistic performances by traveling virtuosos who appeared in the “Cammer” of the aristocratic houses with their ensembles - singly or with choirs ( chamber music ). The solo instrumental concert was thus created. The chamber was followed by the bourgeois concert hall in the late 18th century , which made this art form popular. In particular the violin concerto and, from the second half of the 18th century, the piano concerto became popular forms of performance for well-known soloists.

While the now purely instrumental Concerto grosso is characterized by an often relatively small interplay between Concertino (the soloists) and Ripieno (the entire ensemble), the first solo instrumental concerts follow the example of the opera aria with an alternation of orchestral ritornelles and only from Continuo accompanied solo passages, e.g. B. with Giuseppe Torelli . The word concerto or concert has become established for the instrumental concert.

Antonio Vivaldi developed this concert form further in the corner movements of his concerts; the ritornello did not repeat itself rigidly in the key of the tonic , but varied harmoniously and in scope, and the orchestra could also accompany solo parts. A slow, vocal movement with sparse accompaniment was placed between two corner movements at a rapid pace. As one of the best violinists of his time, he wrote the solo parts of his violin concertos with great virtuosity (playing up to the 12th position , bario position , extreme extension of the left hand), thus contrasting them with the much simpler orchestral parts. A total of 477 concerts by Vivaldi have been received, 228 of them for violin alone, many also for two or more solo instruments. The three-movement system Schnell - Slow - Schnell, standardized by him, remained the basic form of the solo concert until the 20th century.

Johann Sebastian Bach himself copied Vivaldi concertos, among others, and arranged them for keyboard instruments ( organ , harpsichord ), both with and without orchestral accompaniment. The latter concerti for keyboard instrument alone without accompaniment are a special form of concerto. Bach's Italian Concerto for Harpsichord became famous with only two manuals in which the tutti and solo are performed without an additional orchestra. His more mature works deviate significantly from Vivaldi's style: the solo and orchestral parts are interwoven in a contrapuntal way ; In the first movement of the violin concerto in E major BWV 1042, the solo takes a back seat to the tutti violins in places with typical accompanying figures . Composition and composition skill is more important than virtuoso effect. In addition to the two surviving violin concertos BWV 1041 and 1042 and the double concerto for two violins BWV 1043, Bach wrote concerts for one to four harpsichords. His six Brandenburg concerts "Six Concerts Avec plusieurs Instruments" contain elements of concerto grosso as well as a solo concert. By George Frideric Handel two series of 6 each organ concerts originate (Op. 4 and Op. 7), which were played as incidental music in his oratorio performances or public London park. In France , the Concert form refers to an ensemble of a few individual instruments in Francois Couperin's Concerts royaux (1722). Likewise at the Pièces de Clavessin en concerts by Jean-Philippe Rameau (1741), which make the harpsichord stand out as a soloist.

With the emergence of bourgeois concert culture in the second half of the 18th century, the need for ever new attractions for a wide range of listeners increased. He was particularly satisfied with solo concerts. The Tartini student Maddalena Laura Lombardini Sirmen (1745-1818), a graduate of the Ospedale dei Mendicanti in Venice, for example, was the first (female) violin virtuoso to tour Europe ( Turin , Paris , London , Dresden, etc.). Her 6 concertos op. 3 were printed in Amsterdam in 1772/3 and transferred a year later by Tommaso Giordani for harpsichord, which speaks for their popularity. In addition to the musical content of the composition, the personality of the soloists increasingly came to the fore. The baroque composers Vivaldi, Bach and Handel were already known to their contemporaries as virtuosos as well as composers. This is particularly true for the classical composers Mozart and Beethoven .

Formally, the classical solo concert develops parallel to the symphony , from which it takes numerous features. In the fast first movement - usually in the form of a sonata movement - the orchestra usually introduces the first theme before the solo instrument begins with a variant or its own theme. The second movement at a slower tempo, often in song form , gives the soloist the opportunity to demonstrate the beauty of the tone and lyrical qualities, while the final movement is again faster and more virtuosic. Similar to the symphony, the last movement is usually in sonata or rondo form or a combination of both. A new compositional element in the classical concert is the solo cadenza , in which the soloist was able to present his technical ability and originally his talent for improvisation unaccompanied .

Preferred solo concerts of the classical period were the violin concerto and the piano concerto (e.g. Mozart, Beethoven). In the Baroque period the accompanying orchestra usually only consisted of strings and continuo, but in the classical period it is expanded to include wind instruments, initially usually two oboes and horns each, later up to a full symphony orchestra. The scope and musical content of the compositions also increase; While a Vivaldi violin concerto rarely lasts more than 10 minutes and is primarily used for demanding entertainment, Beethoven's violin concerto, one of the greatest masterpieces of “absolute” music, takes around 40 minutes to perform.

With the further development of instrumental virtuosity by the violinist and composer Niccolo Paganini (1782–1840), an eccentric soloist went down in music history. Franz Liszt transferred his virtuosity, which went to the limits of the violin, to the piano, today's concert grand. At the same time, the piano concerto increases in intensity and scope (Liszt, Tschaikowsky , Rachmaninov , Reger ) up to 4 movements ( Johannes Brahms ). Ferruccio Busoni even includes a male choir in the composition of his Piano Concerto op. 39. Conversely, in the romantic concert the movements can merge into one movement : as early as 1841 Robert Schumann wrote a one movement fantasy for piano and orchestra, which was premiered in the same year by his wife Clara Schumann . When no publisher wanted to print the work, the two other movements of his Piano Concerto op. 54 were only written afterwards (completed 5 years later).

Sofia Gubaidulina (born 1931) , for example, shows in a violin concerto, as well as her concerto for viola and orchestra, that new music can also pursue concerts in the traditional form of the solo against (or with) orchestra.

On the other hand, the instrumental concerts in New Music are no less varied than the Baroque. Here, greatly expanded possibilities of instruments and forms are dealt with in an experimental way. Even the " Second Viennese School " around Arnold Schönberg used 12-note and serial compositions at their concerts, e. BA Schönberg, Anton Webern (→ Concerto for nine instruments op. 24), Alban Berg .

Since Paul Hindemith's Concerto for Orchestra from 1925, many composers have composed concerts under the same title that do without “solo instruments” in the sense of “working together”, but treat the orchestral instruments more soloistically, such as Witold Lutosławski and Béla Bartók . The latter in his Concerto for Orchestra , which he composed alongside his violin and piano concertos (their “normal” titles) in the first half of the 20th century. The most modern example of instrumental concerts is Helmut Lachenmann's Concertini for Ensemble from 2005.

Rare and unusual in baroque and modern times

Antonio Vivaldi wrote a series of solo concerts for “rare” instruments such as the viola d'amore , bassoon , chalumeau and mandolin as early as the Baroque period . Johann Georg Albrechtsberger's Double Concerto for Jew's Harp , Mandora and String Orchestra is particularly keen to experiment . Original variations in the line-up also emerge in the context of new music : Igor Stravinsky's Ebony Concerto for clarinet and jazz - big band 1945 and Elliott Carter's double concerto for piano, harpsichord and two chamber orchestras, which, with the juxtaposition of the solo instruments at Philipp Emanuel Bach's concerto for fortepiano and Harpsichord reminds. .

An instrumental concert usually consists of several movements . Since Antonio Vivaldi , the concerto (like the symphony and sonata ) has generally had three movements (fast, slow, fast). The corner movements are in ritornello form and the middle movement is laid out as a song. After the end of the Baroque period , the so-called sonata form for the first movement was established . Carl Philipp Emanuel Bach pioneered the development of the classical concert form . In the Romantic era , concerts increasingly emerged without a fixed sentence or name. The one-movement concert piece is also created (→ Carl Maria von Weber concert piece in F minor for piano and orchestra ). Conversely, e.g. E.g. in Johannes Brahms Piano Concerto in B flat major , a fourth movement ( Scherzo ) should be added.

Double concert and other concert forms

There are quite often concerts for two solo instruments accompanied by the orchestra. They are referred to as a “double concerto”, in which two soloists stand opposite the orchestra and in doing so enter into dialogue with each other and with the orchestra, as in Johann Sebastian Bach's Concerto in D minor, BWV 1043 . There are three soloists in the Triple Concerto (→ Johann Sebastian Bach's Triple Concerto for violin, flute and harpsichord with string orchestra). This and other group concerts , e.g. B. the "Quadruple Concerto", a musical work with 4 protagonists , the concept of which is similar to that of the Quadruple Fugue , existed particularly in the Baroque (e.g. Concerto for four harpsichords with string orchestra by Bach after Antonio Vivaldi ( Concerto in A minor, Op. 3 / 8 ).