Rameau's father, Jean, the family's first musician, was organist at several churches in Dijon, including St. Bénigne Cathedral . His mother Claudine de Martinécourt was counted among the lower nobility and was the daughter of a notary. Jean-Philippe was born the seventh of eleven children, two of whom were also musical: his younger brother Claude became an organist, his sister Catherine played the harpsichord and worked as a music teacher. Claude's son Jean-François became immortal through Diderot's novel Rameau's nephew .

Jean-Philippe received his first musical training from his father. He attended a Jesuit school , but had to leave it due to poor performance. At about the age of eighteen he went on a trip to Italy, but it did not go beyond Milan. He worked in various cities, as an orchestral violinist and organist in Marseille , Avignon , Albi , Montpellier , Nîmes and Lyon .

In January 1702, Rameau was temporarily engaged as organist at Avignon Cathedral . From May he got a job as organist in Clermont , which was scheduled for six years, but from which he moved to Paris in 1706 and worked closely with Louis Marchand . That year he published his first collection, Pièces de clavecin . From 1706 to 1709 he was titular organist in several Paris churches, but no organ works by his hand are known.

In 1709 he took over his father's position as organist of the Notre-Dame de Dijon church . This contract was originally stipulated for six years, but Rameau's presence in Lyon is documented as early as July 1713 , from where he again moved to Clermont in 1715 as an organist, which was planned for 29 years. More information about Rameau's work is only available from 1722, when he finally settled in Paris. 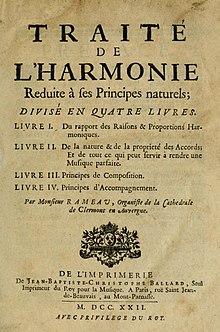 Soon afterwards his theoretical work (Traité de l'harmonie réduite à ses principes naturels) , which he had already written in the Auvergne, was put into print. Together with the supplementary Nouveau Système de musique theorique of 1726, he founded modern music theory for chord and harmony theory and earned a reputation as a theorist. Before him, many authorities up to Johannes Kepler , Christiaan Huygens and Leonhard Euler had attempted a mathematical foundation of the tone systems since antiquity , but often in an unsystematic and speculative manner. Rameau tried in the style of Descartes , whose Discours de la méthode he had read, to free himself from the doctrines of the authorities and to justify his theory of harmony strictly deductively, based on the principle of la corde est à la corde ce que le son est au son ( “The string is related to the string as the tone is to the tone”). With “l'accord tonique” he coined the term tonic for a triad. The terms subdominant and dominant also go back to Rameau, in whose system, however, they had a different meaning than today. His theory of harmony is often referred to as fundamental bass theory.

On February 25, 1726, at the age of forty-two, he married nineteen-year-old Marie-Louise Mangot from a family of musicians. Marie-Louise later sang in several of Rameau's operas. She had two sons and two daughters. Jean-Philippe Rameau applied for an organist post in 1727, but Louis-Claude Daquin got it. A permanent position as an organist is only documented for 1732, which he kept until at least 1738.

Around 1727 he met his patron Alexandre Le Riche de La Pouplinière , a general tax collector ( Fermier Général ) of King Louis XV. who let Rameau and his family live in his palace on rue de Richelieu . Rameau directed the private orchestra of his benefactor for at least twelve years, where he was able to gain valuable instrumental experience and experiment with the ensemble.

Up to the age of fifty, his compositional work was limited to a few cantatas, motets, stage music and three collections of harpsichord pieces. The last two of these collections are very original and place Rameau among the best of his guild in France. In 1723 Rameau began working with the writer Alexis Piron . He wrote his first stage music for four of his comedies. However, none of these compositions have survived.

After several failures, Rameau succeeded in staging his first scenic work in 1733, the operatic drama Hippolyte et Aricie based on Jean Racine's tragedy Phèdre . This work is in the tradition of Jean-Baptiste Lully , but it far exceeds the musical richness that has been accustomed to date. A contemporary said, “This opera contains enough music to make ten out of it”.

The "Lullysten" found this music too modern, while Rameau's followers, the "Ramists", found it brilliant. The premiere was received with extreme caution, but success came immediately afterwards. Rameau earned the highest fame and was by Louis XV. Elevated to the nobility, appointed cabinet composer and received a pension of 2,000 livres . Operas, heroic works, ballet music followed work after work until his death. Rameau changed his librettists very often, but with his ambitious thinking he could not find anyone who could write a text corresponding to the quality of his music. At the same time he was tirelessly occupied with theoretical work and endeavored to enforce his principles, which would later form the basis of the theory of harmony.

In the so-called Buffonist dispute between French and Italian music styles, Rameau represented the French side. For the Italian, Jean-Jacques Rousseau pleaded “in his famous Lettre sur la Musique Françoise ” (the letter on French music). The criticism was particularly directed against Rameau . In the piccinnist dispute, a contrast between Italian and French music was once again evoked and this time the decision was made in favor of a French operatic style, represented by Christoph Willibald Gluck , who had “taken Rameau's place”.

Statue in his hometown of Dijon by Eugène Guillaume

After his death, he received great recognition as one of the great French musicians, which could not prevent his lyrical work from falling into oblivion for 140 years. At the beginning of the 20th century the ballet music La Guirlande was performed again for the first time . Another milestone was Nikolaus Harnoncourt's performance and recording of Castor et Pollux with the Concentus musicus Vienna in 1976. Gradually, his works reappear on the repertoire of opera houses. The majority of his works, formerly considered unplayable, can now be found in the repertoires of the most famous baroque ensembles, understandably particularly in France. His last work, Les Boréades , was not premiered until 1982 after rehearsals were interrupted because of Rameau's death in 1764.

In addition to the dramatic works, chamber music makes up a relatively small but significant part of Rameau's work. Almost all of the around 50 individual movements for solo harpsichord were written before his operas. While the first published collection (1706) contains a suite of a prelude and eight dances, the other two collections (1724 and around 1726–28) each consist of two suites. The first of the two suites begins with the traditional dances Allemande and Courante , followed by a mixture of dances and character pieces ( Les Tourbillons = The Whirlwinds, or L'Egyptienne = The Gypsy). In the piece L'Enharmonique (1728) Rameau demonstrates the poetic possibilities of enharmonic confusion . Although Rameau's character pieces are in the footsteps of François Couperin , he developed his very own style and, above all, technically went far beyond anything that was known in virtuosity up to then (not only) in France. An example of this is the piece Les Trois Mains (= the three hands), in which he asks the player to cross his hands - the so-called “ Scarlatti handle”. Rameau later used a number of his harpsichord pieces in an orchestrated version as ballet interludes for his stage works. a. the Musette en Rondeau and the tambourine from 1724 in Les Fetes d'Hébé (1739), Les Niais de Sologne (1724) in Dardanus (1739) and Les Sauvages in Les Indes galantes (1735).

The Pièces de clavecin en concert from 1741 for harpsichord, violin and gamba have their very own structure (the instruments could be exchanged for a flute or a second violin). These are not the popular trio sonatas , in which the harpsichord exposes an accompanying figured bass , but the harpsichord part is the actual solo instrument. The Pièces de clavecin en sonates (1734) from Mondonville were a model for this form . The pieces, organized in five suites with three to four movements each, have partly programmatic titles, partly they were subsequently given the names of people such as La Pouplinière (Rameau's patron) or La Laborde (his student at the time).

In his theatrical works, Rameau usually adhered to the Lully tradition of typically French declamation in the recitatives and syllabic singing in the airs (arias), which are sometimes held in the form of dances ( Menuet , Gavotte , Loure) ) and then go straight to ballets. Only in a few exceptions did he deviate from these strict guidelines, but this was always motivated by the text or dramatically, as it happened before. An unusually extreme and actually untypical example is the well-known aria of the slide (=  madness , madness) "Aux langueurs d'Apollon" in Platée (1745), actually a parody of the Italian opera, where he describes the "madness" of the character through " expresses crazy “Italian coloratura , jumps and a written cadenza . Rameau also wrote impressive arias and scenes in the tragic genre, e.g. B. the choir “Que tout gémisse” (Everything should sigh) and the aria “Tristes apprèts, pâles flambeaux” by the Télaire in Castor et Pollux , with solo bassoons .

The orchestra played an outstanding role in the effect of his music. The real revolutionary innovations by Rameau consisted in the brilliant, sparkling and often incredibly virtuoso orchestral composition, especially for the strings. This was felt to be Italian in France, although Rameau did it in a very unique way that stylistically had little to do with Italian music. In addition, there is an original, imaginative and daring instrumentation for its time, with wind instruments often performed as soloists, especially transverse flutes , piccolo flutes , oboes and bassoons. He was also one of the first composers to use the completely new clarinet , e.g. B. in Acanthe et Céphise (1751).

The asteroid (4734) Rameau was named after the composer. The same applies to the Rameau Inlet , a bay on the coast of Alexander I Island in Antarctica, and the Rameau Ice Shelf in it . 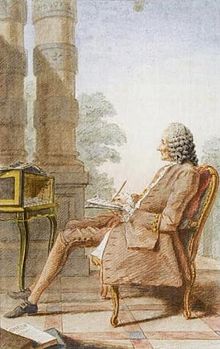 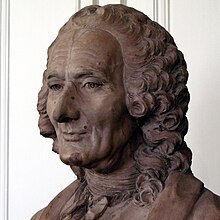 With the year and place of the first performance.