The piccolo or piccolo (also: the piccolo ) or small flute is a smaller design of the transverse flute . It is tuned an octave higher and is the highest classical woodwind instrument and is also one of the highest instruments in the symphony orchestra.

The piccolo is about 26 to 32 cm long, about half the size of the flute and has a diameter of 1 cm. The piccolo can be made of wood or metal, sometimes plastic piccolos are also found. The keys are usually made of nickel silver and are silver-plated or nickel-plated. 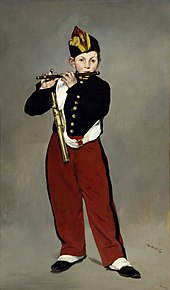 An early form of the piccolo has been used in military music since the Middle Ages , as a Schweging whistle with six holes , which together with the snare drum made the typical sound of the infantry . The instrument remained in this context until the 18th century . At the same time, attempts were made to build the newly developed transverse flute in other, i.e. also higher, voice registers . Over the course of time, the piccolo was subject to the same structural developments as the transverse flute and, from the second half of the 19th century, was also provided with the Böhm system more and more frequently .

The range extends from d2 to b4. Since the sound is an octave higher than the notation, the piccolo is a transposing instrument . For military and brass music , the piccolo was also built in other tunings such as 2 or Es 2 , but these instruments are rarely found today.

Piccolo with headjoint made of silver

Even in baroque music there are lines of scores with names like flauto piccolo or flautino , but it is unclear whether these parts are actually composed for a small flute or not for a high recorder .

Later composers used the piccolo on the one hand to create exotic coloring by imitating the pipes in Janissary music (as in Mozart's “ Entführung ” or in a duet with the contrabassoon in Beethoven's 9th Symphony ) or for shrill, natural effects such as the whistling of a whistle Storm or the electricity of lightning (such as Beethoven in the “thunderstorm” of his 6th symphony ). In great romantic operas there are cutting piccolo passages, especially in large choir and horror scenes.

At the latest with Richard Strauss and Gustav Mahler , the instrument is a full member of the woodwind section and is sometimes used as a solo instrument .

Simple designs with little or no mechanics are sometimes still used in folk music today.