Since all of her sisters died very young, Isabel was the only surviving daughter from the marriage of the Portuguese King John I to Philippa of Lancaster , a daughter of John of Gaunt . Her brothers, with whom she grew up well protected at the court of Lisbon , included Duarte (who was to succeed his father as King of Portugal in 1433), Pedro ( Duke of Coimbra since 1415 ), Henrique (later known as Henry the Navigator ), João and Fernando (later known as Ferdinand the Saint ). Isabel was raised according to her Conservative mother's strict beliefs about court etiquette, but was also allowed to attend her brothers' classes. She learned a basic knowledge of mathematics and science as well as several languages ​​such as Latin, French, English and Italian. At her father's instigation, she was also given a solid education in politics at an early stage. Her mother gave her an English-friendly attitude.

As part of the Hundred Years' War in 1415, negotiations were held on the marriage of Isabel to King Henry V of England in order to strengthen the Anglo-Portuguese alliance directed against France , but this marriage project failed. Isabel was more saddened by the death of her mother that same year, whereupon she withdrew from court life for a short time out of mourning. After that, the Infanta took over the tasks previously performed by her mother at court and was probably active for a long time in the government, administration and finance of Portugal.

Marriage to Philip the Good 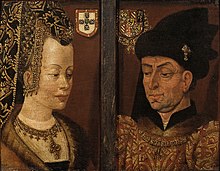 Double portrait of Isabella and her husband Philip the Good

After the twice widowed Philip the Good of Burgundy had no surviving offspring from his first two marriages, he was looking for a third wife who should come from England or a state allied with this country. In October 1428 he sent one of his main advisers, the Seigneur de Roubaix, to head an embassy to Lisbon, which was supposed to woo him to win the hand of Isabel, who was 31 years old, well above the usual age at marriage. At the beginning of 1429 successful marriage negotiations took place. The famous Flemish painter Jan van Eyck , who had been in the service of Philip the Good since 1425 and who had accompanied the Seigneur de Roubaix to Portugal, made a portrait of Isabel which was sent to the Duke. After obtaining the formal consent of the Duke, the marriage contract was signed on July 24, 1429 in Lisbon and there was celebrated Isabel's long-distance marriage to Philip the Good the following day, with Roubaix taking over the role of bridegroom.

For a good two months, the bride took part in a number of celebrations and tournaments organized to mark her farewell and left her home on October 19, 1429 on board a fleet of around 20 ships. They were accompanied by an entourage of 2,000 Portuguese. After a stormy sea voyage on which several of her ships sank, she finally arrived in Sluis on December 25, 1429 and celebrated her ecclesiastical marriage to the Burgundian duke on January 7, 1430 in Bruges . At that time he was at the height of his power, held one of the richest courts in Europe and accordingly displayed the greatest pomp and pomp and splendor at his wedding and the festivities that followed for a week. The Order of the Golden Fleece was founded on this occasion .

The clever and serious Isabel was worthy of her new position as Duchess of Burgundy and capable of most of the associated tasks. Because of her education and the experience she had gained in the field of politics in her home country, she was able to play an important role in the politics of Burgundy. The later Pope Pius II characterized them as ambitious and domineering. Numerous Portuguese refugees lived at the Burgundian court under their patronage. That Philip the Good had affairs with numerous mistresses and fathered many illegitimate children with them caused his wife a lot of grief.

At the side of her husband, the soon-to-be-pregnant duchess went on a tour of her new home in early 1430. From mid-March Isabel stayed in Noyon , but went to Péronne when Joan of Arc attacked the nearby Compiègne . After Jeanne d'Arc was captured by the Burgundians (May 23), the Duchess returned to Noyon and wished to see the imprisoned French national heroine. This was then brought to Noyon in June 1430, but no details are known about the meeting of the two women.

The Duke and Duke of Burgundy soon had three sons, the first two of whom died early, so that the third son, Karl, was to become heir to the throne:

During the absence of her husband from the Burgundian Netherlands in 1432 and at a later period (1441–1443) Isabel led the government there. In addition, she particularly performed the role of an important diplomatic negotiator for her husband. She was present at the Arras Peace Congress in 1435 and contributed to the positive conclusion of the separate Burgundian-French peace that led to the reconciliation of Philip the Good with King Charles VII . In England, however, people reacted angrily to the behavior of their former ally Burgundy and a year-long trade war between the two states began. In 1439, Isabel led the negotiations taking place in Calais and Gravelingen on behalf of the Burgundian side , which led to the settlement of the military disputes that had massively damaged trade between the two conflicting parties. On the fringes of these peace talks, Isabel also succeeded in obtaining the release of Duke Charles of Orléans , who had been imprisoned in England since the Battle of Azincourt (1415) and who in the same year took the hand of the niece of the Burgundian Duke, Maria von Kleve , who was released in 1440 against payment of a large ransom , received. In 1444 Isabel negotiated with insurgent cities in Holland.

Isabel also contributed significantly to the arrangement of marriage projects for several high-ranking persons at her court, including the marriage of her son Karl to Catherine de Valois (1440) and of Maria von Geldern to King James II of Scotland (1449). As early as 1437 she brokered the marriage of the heiress of Penthièvre , which ended the dispute between the older and younger branches of the Brittany dynasty . Isabel also exerted significant influence on the Burgundian crusade plans and favored an alliance of the Turks, including the Holy Roman Empire and Aragon, through the marriage of Emperor Frederick III in Rome in 1452 . with the Portuguese Infanta Eleonore Helena and the wedding of Adolf von Kleve celebrated in 1453 with Beatrix , the daughter of Isabel's brother Pedro.

The Duchess of Burgundy liked to surround herself with artists and poets. On her initiative, Aliénor von Poitiers wrote the work Les Honneurs de la Cour , which dealt with the rules of court etiquette and remained formative for this cultural area for a long time. Isabel also devoted herself to charitable and religious activities and founded monasteries and hospitals; she also took care of the sick and the poor. Her confessor was the scientifically educated prelate Jean Germain , who was among other things Bishop of Nevers and since 1436 Bishop of Chalon-sur-Saône .

When the future French King Louis (XI.) Fled to Burgundy in 1456 from his father Charles VII, he discovered that there was one of the pro-French brothers Antoine and Jean II de Croÿ , who had become friends with Philip the Good Faction and a party led by pro-English Chancellor Nicolas Rolin fought for power, with Isabel and her son Karl supporting the Chancellor. In 1457, the Duke of Burgundy and his son and heir to the throne, Charles, fell apart, for which, according to the French chronicler and poet Georges Chastellain , Isabel was largely responsible. These events probably contributed to Isabel's withdrawal from court life in 1457 and since then has mainly resided in La Motte-au-Bois Castle near Hazebrouck .

Isabel outlived her husband by four years and died in 1471 at the age of 74. In 1473 her body, like that of her husband Philip, was buried in the Carthusian Church in Dijon by order of her son Karl .