Louis XI. was the eldest son of King Charles VII the Victorious of France and his wife Marie d'Anjou . He was baptized in the Cathedral of Saint-Etienne in Bourges by William of Champeaux , Bishop of Laon , his godfather was Duke John II of Alençon .

From his youth on Ludwig showed a domineering, yet treacherous character, appeared as a declared enemy of his father and his lover, Agnès Sorel , and in 1440 even placed himself at the head of the praguerie , an association of the high nobility against his father's favorites. The rebels were soon subjugated by Karl, but Ludwig was pardoned and from 1442–1443 entrusted with the command against the English and Swiss . In the battles that followed, he showed bravery and wisdom. Participation in a new conspiracy against the king was also forgiven him; Nevertheless, there was another break between father and son in 1456, and from then on Ludwig lived at the court of the Duke of Burgundy . When the crown fell to him after the death of his father in 1461, the old councils met with severe persecution and the greats ruthless humiliation, namely the houses of Burgundy and Brittany , which in 1465 led to a coalition of the nobility (the Ligue du Bien public ) at their head his brother Karl von Berry (Charles de Berry) and Charles the Bold (Charles le Téméraire), who later became the Duke of Burgundy, stood. After the undecided battle at Montlhéry (south of Paris ), Louis the Great had to make considerable concessions.

Statue of Louis XI. in a praying posture

In 1468, Louis was imprisoned by Charles the Bold near Péronne and had to free himself through the humiliating treaty of Péronne and witness the bloody suppression of the Liège uprising , which he himself instigated. Barely free again, he renewed the deal with the Duke of Burgundy, which lasted until 1472. In that year Philippe de Commynes (Philippe Chevalier de Commynes (Commines), Seigneur d'Argenton, 1447-1511) entered the service of the king and from then on became the main tool of his politics. While Charles the Bold made an alliance with Edward IV of England to conquer France, Louis allied himself with the Swiss and Renatus of Anjou , Duke of Lorraine , Count of Provence and titular king of Naples . After the death of Charles the Bold (1477 at the Battle of Nancy ), Ludwig took the Burgundian cities in Picardy , Artois , Flanders , Hainaut and the Duchy of Burgundy as an open fiefdom; the rest of the inheritance escaped him through the marriage of Mary of Burgundy to Maximilian . Ludwig made some other important acquisitions by getting Renatus of Anjou to make the childless Count Charles II of Maine his heir. The latter died in 1481, and now Louis seized the counties of Provence and Forcalquier as well as Anjou and Maine as repudiated fiefdoms. Tormented in recent years by terrifying fantasies and several strokes (1473, 1479 and 1481), he locked himself in the Plessis-lès-Tours fortress and died here five days after his fourth stroke on August 30, 1483. The king was buried in Notre-Dame de Cléry near Orléans . 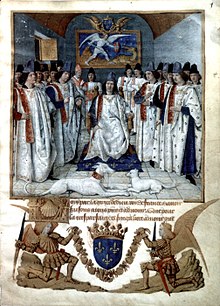 Louis XI. and the Knights of the Order of Saint-Michel

Ludwig was one of the best-educated men of his century, clever and firm, tirelessly active and just, where the interests of his power were not involved, but then cruel. He locked his minister, accused of treason, Cardinal Jean de La Balue , in a castle for eleven years. However, he was highly suspicious and cynical, which earned him the nickname l'araignée or l'universelle araignée - "the spider" or the "universal spider". “He who cannot pretend cannot rule,” he used to say. Thomas Basin , Bishop of Lisieux from 1447 to 1474 and French chronicler of the Latin language, comments on Louis XI: ugly tyrant, insidious and cruel, he locked his enemies in iron cages. The chronicler designates Louis XI. “As a special villain, known here on earth to hell. A hideous (horrible) tyrant - admired by the people, a demonic (diabolical) genius ”, founder (father) of the French central state. In order to make himself independent of the great, Ludwig preferred to surround himself with servants of the lower class such as Olivier le Daim (called Oliver le mauvais , "the bad one", or Oliver le Diable , "the devil"), his barber or his "godfather" Tristan.

His services to France are very important. Louis XI. destroyed the great vassal states within the empire and extended royal rule to the Pyrenees , Alps and the Jura . He promoted trade and industry, especially agriculture and mining, set up la poste royale - the first postal system of the French state , summoned insightful men to the meetings of the State Council, left the estates of the empire in a single meeting, the third with the two the privileged mixed, consulted, gave the communities the free choice of their heads, was extremely economical in the use of state money and lived very simply. Under his reign, tax revenues rose to nearly 5 million livres .

1461 he put the lifting of his father (along with Cardinal Jean de La Balue adopted) 1438 " Pragmatic Sanction of Bourges " without the consent of Parlements by. For this, Pope Sixtus IV. (1471–1484) awarded him the sword and hat , consecrated for Christmas 1462 . Ludwig concluded a concordat with Sixtus IV to determine the bishops by the King of France. With the papal consent, he took on the title of rex christianissimus (most Christian king) for the first time and in 1469 founded the Ordre de Saint-Michel , the first French knightly order . He showed himself to be a friend of the sciences through the establishment of printing presses, the reformation of the Paris University, the founding of others and the appointment of Greek scholars. He is also considered to be primarily responsible for breaking up the Coquillards .

Louis XI. - equipped with a clear view of its political advantages and often favored by luck - became the pioneer of royal absolutism and centralism in France .

His first marriage was to Margaret of Scotland , and his second marriage on March 9, 1451, was Charlotte of Savoy , with whom he had the following children:

In the Nouvelle histoire généalogique , the royal couple is also assigned a first son named Ludwig, who is said to have been born in Genappe in October 1458 . However, since no archival material is known to confirm the existence of this child, recent research assumes an error by the authors.

From his relationships with Phélise Regnard and Marguerite de Sassenage , Louis XI was. also the father of four illegitimate daughters: