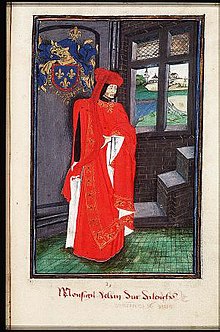 Johann II the Beautiful (born March 2, 1409 in Argentan ; † September 8, 1476 in Paris ) was Duke of Alençon and Count of Le Perche . He was the son of Duke John I of Alençon from the House of Valois-Alençon and Maria of Bretagne.

Johann was only six years old when his father was killed in the battle of Azincourt (1415). In 1424 he himself was defeated and captured at the Battle of Verneuil . It was not until 1427 (or 1429) that he was released for a ransom , which, however, left him penniless, especially since his duchy was under English control.

In the spring of 1429 he met at Chinon on Jeanne d'Arc and was their most important supporters in the royal family; she called him the "friendly duke" (gentil duc) . After the liberation of Orléans (1429) he commanded the army of King Charles VII with Joan of Arc at his side. On June 11th and 12th both won an important victory at the Battle of Jargeau . In July he accompanied Charles VII to the coronation of the king in Reims . After that, his interests led him to Paris, where Jeanne was wounded on September 8, 1429 while trying to occupy the city; then he rode to Normandy , where he fought against the English and the Bretons.

The reconciliation between France and Burgundy through the Treaty of Arras (1435) brought him into opposition to Charles VII, because he had hoped to be able to compensate for his ransom and the loss of his duchy by sacking Burgundy . He joined the conspiracies against a royal government which, in his opinion, did not sufficiently take into account the interests of the French princes. One of these conspiracies was the Praguerie (1439/40), which, however, could not prevail against the king; Johann was nevertheless pardoned.

In April 1440 he started negotiations with the English. He also became a knight of the Burgundian Order of the Golden Fleece , but nevertheless took part in the conquest of Normandy by France in 1449/50 .

Shortly after his testimony in the rehabilitation trial of Jeanne d'Arcs (1456) he was arrested by Jean de Dunois and imprisoned in Aigues Mortes . The Cours des Pairs sentenced him to death in 1458 for insulting majesty , but Charles VII commuted the death penalty to imprisonment at Loches Castle . King Louis XI. who had participated in the praguerie as a Dauphin , released him on the occasion of his accession to the throne (1461). However, when he allied himself with Charles the Bold , Duke of Burgundy , he was sentenced to death again on July 18, 1474. His duchy was confiscated, but the execution was not carried out. He died in captivity in the Louvre on September 8, 1476 .

In addition, he had several illegitimate children: