Jean of Orléans, Earl of Dunois and Longueville

Johann von Orléans, Count of Dunois or Jean d'Orléans, comte de Dunois or Jean de Duno (* November 23, 1402 , † November 24, 1468 at Castle L'Haÿ ) was a Grand Chamberlain of France and comrade of Joan of Arc . About 80 years after Bertrand du Guesclin he was one of the great and successful military leaders during the Hundred Years War (1337-1453) on the French side.

Johann is often called Bastard von Orléans ( le Bâtard d'Orléans ), also simply Dunois , for example in Schiller 's ' The Maiden of Orleans ', although he was only awarded the title Count von Dunois in 1439, years after Johanna's death. From 1443 he was also Count of Longueville . 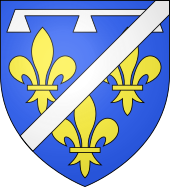 Jean de Dunois was the illegitimate son of Duke Louis de Valois and his mistress Mariette d'Enghien, whose life dates are not known; He was thus illegitimate cousin of the future French King Charles VII. He was brought up in his father's family, in the first years of his life by his wife, Valentina Visconti , Countess of Vertus - a procedure that was quite common in the nobility at the time. Initially destined for the clergy, he escaped his teachers as a youth and entered the service of the Dauphin , later Charles VII, who had largely lost his kingdom as a result of the Treaty of Troyes and fled to Bourges . His first act of arms was a victory over the British, who were always successful in this phase of the Hundred Years' War, and which he forced to withdraw from Montargis in 1427 .

Jean d'Orléans, excerpt from a miniature in the Jean d'Orléans Book of Hours, designed by the master of Dunois

When the English besieged Orléans in 1429 , he joined the defenders with a crowd and claimed the city until she was appalled by Joan of Arc. From her appearance in Chinon (March 1429), Jean de Dunois was a faithful companion in arms of the Maid of Orléans and took part in many of her military actions. After the battle of Patay on June 18, 1429, he passed through the territories of the English. Even after Jeanne's capture (May 23, 1430 near Compiègne ) and execution (May 30, 1431 in Rouen ), he continued to excel in the fight against the English. 1433 he took Chartres , in 1436 he entered Paris and was the county Dunois invested . In 1442 he drove the dreaded John Talbot, 1st Earl of Shrewsbury from Dieppe , for which he was enfeoffed with the County of Longueville . In 1448 he took command of Normandy and wrested this province and Guyenne from the English until 1455 . Louis XI. sent him in 1462 as governor to Genoa , which had chosen France. A short time later the king deprived Dunois of his offices out of suspicion and jealousy.

Towards the end of the Hundred Years War, when the danger from the English had largely been averted, Jean took part in the praguerie uprising of the French nobility in 1440 and towards the end of his life in the Ligue du Bien public , after he was led by Louis XI. had been removed from office. In the Treaty of Saint-Maur , Jean de Dunois got his confiscated goods back.

Jean de Dunois died on November 24, 1468 at L'Haÿ Castle . He was buried in the Notre-Dame de Cléry church .

He married in April 1422 in Bourges Marie Louvet († 1426), daughter of the minister Jean Louvet . There are no known descendants from this marriage.

He concluded his second marriage on October 26, 1439 with Marie d'Harcourt († 1464), Dame de Parthenay, with whom he had two children: