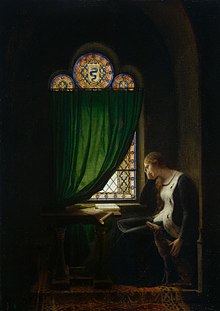 François Fleury-Richard: Valentina Visconti, Duchess of Orléans in her Kemenate

Valentina Visconti (* 1366 or 1368 ; † December 4, 1408 in Blois Castle ) was the daughter of Gian Galeazzo Visconti , Duke of Milan, and the French Princess Isabella of Valois. Her brothers Giovanni Maria Visconti and Filippo Maria Visconti were the last two Visconti dukes of Milan.

In 1396 Valentina withdrew from the Parisian court with her son Karl to the provinces because her sister-in-law, Queen Isabeau, claimed that she was to blame for the increasing mental confusion of King Charles. While her husband remained at court as regent for the deranged king, she devoted herself to the upbringing of her children and a legitimate illegitimate stepson, the future Count of Dunois . From 1406 she mothered Isabella von Valois , the fiancée of her eldest, his cousin.

On November 23, 1407, her husband Ludwig was murdered on the street in Paris on behalf of his cousin, the Burgundian Duke Johann Ohnefurcht , his fiercest rival for the reign. Valentina tried to enforce the punishment of the murderers and their instigator, but failed and, exhausted, succumbed to an illness, barely more than a year after the death of her husband.

Valentina Visconti gave birth to ten children to Ludwig von Orléans, only four of whom survived.

Her grandson Ludwig von Orléans (son of her son Karl) arrived in 1498 as Ludwig XII. to the French throne, as the successor to Charles VIII, who died without a male heir .

Her great-grandson Franz von Angoulême (grandson of her son Johann) came to the throne in 1515 as Franz I , son-in-law and successor to Louis XII, who died without a male heir.

Valentina's son Karl was unable to enforce the claims she had inherited on Asti in northern Italy or even in Milan. Her grandson Ludwig and later her great-grandson Franz tried to do this from 1499. They thus triggered a series of ultimately unsuccessful wars, through which Italy largely came under Austrian and Spanish rule and fell politically and economically.

In 1502, Louis XII. an elaborate tomb with two gisants for his grandparents was commissioned by the Italian sculptors Michele d'Aria (1446–1500), Girolamo Viscardi (1467 – after 1522) from Milan, and Donato di Battista Benti and Benedetto da Rovezzano from Florence, who lived in Genoa . The work arrived in France in 1516 and was installed in the Celestine Monastery in the burial place of the House of Orléans. It is now located in the south aisle of the basilica - Saint-Denis Cathedral .