Conquest of Copenhagen by the Hanseatic League, illustration from the 19th century.

Xu Da , general of the Red Turbans rebelling against the rule of the Mongols in China , attacks the Chinese capital Dadu and, after winning the battle, forces Emperor Toghan Timur from the Mongolian Yuan dynasty to flee north. In the course of this persecution he succeeds in winning over the Korean general Yi Seong-gye , who was actually allied with the Mongols and who later founded the Korean Joseon dynasty .

Supreme rebel leader Zhu Yuanzhang proclaimed himself the first emperor of the Ming Dynasty on September 14th under the name Hongwu . During his reign the economic reconstruction and the building of a new absolutist-centralist administrative structure are the focus of the efforts. In addition, the transfer of the capital to the south begins. First, Hongwu has Kaifeng , the old capital of the Song dynasty , and the capital of the Han and Tang dynasties explore Chang'an , then he settles on his own birthplace, Fengyang , a few hundred kilometers northwest of Nanjing . Here he wants to build his new residence, the Middle Capital ( Zhongdu ). It is the southernmost royal seat of the entire Chinese empire to date. 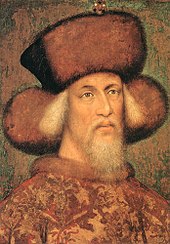 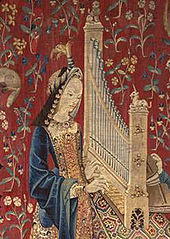 Blanche von Lancaster, The Lady with the Unicorn , from a series of Flemish tapestries (15th century)