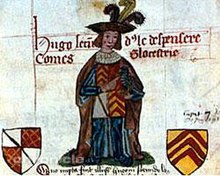 In the Despenser War , rebellious English barons plundered the possessions of the royal favorite Hugh le Despenser in Wales from May 4th to 13th . On August 14, the barons force Despenser and his father to be exiled by King Edward II , but the king takes action against the rebels as early as October and can put down the rebellion in Wales by the end of December.

The Lithuanian prince Gediminas defeated after he Brest Ovruch and Zhitomir conquered, a force of southern Rus -Fürstentümer in the Battle of Irpen in Kiev , what a vast area profit for the Grand Duchy of Lithuania means and the beginning of its rise as a great power. The Kiev prince Stanislav flees to the principality of Ryazan after the lost battle . Gediminas then conquered the Principality of Pereyaslavl and began the invasion of other principalities such as Chernigov and Kiev . During his campaign he conquered the cities of Pereyaslav , Putivl , Vyshgorod , Kanew and Belgorod .

Shortly before his death in exile with Guido Novello da Polenta in Ravenna , Dante Alighieri completed the Divina Commedia ( Divine Comedy ). It is considered to be the most important poetry in Italian literature and at the same time establishes the Italian language as a written language. It is also considered to be one of the greatest works in world literature .

In autumn Guido sends Dante on a diplomatic mission to Venice, from which the poet returns sick and dies on the night of September 14th.

Register of the Bohemian Country Table 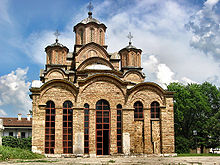 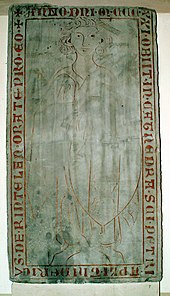 Grave slab of Dietrich von Rinteln : The incised drawing in the Kreuzkirche is the oldest preserved tomb in Hanover 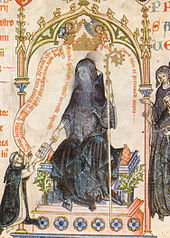 Dedication sheet of the Kunigunden Passionals , created between 1312 and 1321; the abbess is depicted on it as the king's daughter and bride of Christ.