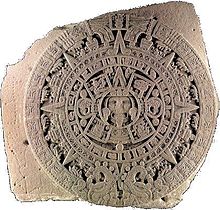 One of the rings of the 24 tons of heavy stone of the Sun consists of 20 day signs, which is why this stone sometimes called Calendar Stone was called.

The Aztec calendar is one of many structurally identical calendars that were developed and used in pre-Hispanic Mesoamerica . Alongside the Mayan calendar, it is the best known and best researched because it was used by the Aztecs , who ruled a large part of central Mexico at the time of the Conquista . Numerous Spanish authors, mostly clergy, have left descriptions that are more or less incorrect.

The civil Aztec year consists of 18 sections of 20 days each. In addition, there is a section that is invariably 5 days long , which is added after the 18th section in order to reach the total duration of 365 days. The sections are called mēztli in Aztec , which also means moon, although there is no relation to the moon, its phases and the duration of the lunation of 29.53 days. The mēztli not only have different names in groups with other languages, but also in the Aztec-speaking area, which mostly refer to natural phenomena in the course of the seasons, with a shift of several months being noticeable. The names refer to the festival that was usually celebrated at the end of the section. The translations are not always certain.

The last festival was followed by 5 days called nemontemi , which were understood as unhappy or useless days when one should abstain from important activities. Likewise, bad fate was predicted for children born on these days. After these days the year began again. The days of the sections were not counted and therefore not used to determine times.

The ritual calendar is made up of two interlinked (combined) cycles. The first (and perhaps older) consists of 20 characters that correspond to names (and images) of animals, plants and natural phenomena. These names are also often similar in content among the different peoples of Mesoamerica in the respective languages. For the Aztec calendar, it is noticeable that not all of the animals were free in the Aztec habitat, but were of course known. The directions were assigned to the signs.

The second cycle consists only of the numbers from 1 to 13 combined with the first cycle in such a way that both ran independently next to each other. Because 13 is a prime number , there was an immutable sequence of 260 day names. The sequence began with ce cipactli ( cē sipactɬi , 1 caiman), ome ehecatl ( ōme e'ēcatɬ , 2 wind), ey | calli ( ēj calli , 3 house), until after 260 days (names) matlactli omei xochitl ( matlactɬi ōmej ʃōtʃitɬ , 20 flower) was reached, with all possible combinations being used up. Then the Tonalpohualli ( tōnalpōhualli ) started all over again.

The day names of the Tonalpohualli were used because of their unchangeable sequence to designate points in time. Since the sequence of names is repeated after 260 days, the days so named were only unambiguous within this period. The Tonalpohualli were not counted. While in large cities like Tlatelolco there was a daily market, in smaller towns this is said to have only been the case on every fifth day (defined by the Tonalpohualli).

Another application of the Tonalpohualli was fortune-telling, the determination of suitable and unsuitable days for certain activities. In pre-Hispanic times, tables were used for this purpose, which were recorded in illuminated manuscripts. Most of these illuminated manuscripts have not survived from the Aztec area, but from the codices of the Borgia group, which presumably came from the region of Puebla . There the 260 days are divided into 20 sections of 13 days, each of which occupies a double page. These sections are usually referred to with the Spanish expression trecenas (units of thirteen), an Aztec expression is not known. For an example see Codex Borbonicus .

The day names of the birthday or an accompanying ceremony were used as personal names by various neighboring peoples of the Aztecs, this was unusual among the Aztecs themselves.

The Tonalpohualli has an interesting property. Its duration is equal to 2/3 of a so-called eclipse half-year of 173.31 days, in which the conditions for eclipses are repeated. It is not known if this property was known to the peoples of central Mexico. However, they can hardly have escaped the fact that eclipses (of the sun as well as the moon) only occur in three groups of about 18 days of a Tonalpohualli, i.e. only in one fifth of its days, which is why eclipses tend to occur on days of the same name on the Tonalpohualli.

In the Codices of the Borgia Group there are numerous tables in which the Tonalpohualli is broken down into 4, 5, 10, 13 and 20 sub-cycles, which in turn are broken down into sections of 2, 4, 5, 6 or 8 days. These departments are linked to certain deities and their aspects and activities, which are therefore repeated in a tonalpohualli according to the number of sub-cycles. How exactly this system, which also occurs in Maya manuscripts, was used is unknown, as there is no authentic interpretation.

Nevertheless, this combination was suitable for chronological purposes if the same day of the same section was used in the course of the Xiuhmolpilli, for example the last (20th) day to mark a year. In this way, a clear sequence of 52 day characters is created that were used as the names of the respective years. The table shows the sequence of years. After each round of a Tonalpohualli, a special ceremony took place, during which the hearth fire, which had previously been extinguished everywhere, was re-lit with a fire drill and distributed among the households. This important ceremony took place for the last time in the year 1507, the year 2 acatl (traditionally the Xiuhmolpilli began with this year name because the schematically correct 1 tochtli was avoided due to a historical famine). With the help of the table, the European year, in which most of the Aztec year falls, can be calculated for each Aztec year name by adding the value of the table to the Julian year 1505 and subtracting multiples of 52 if necessary.

The most important research problem on the Aztec calendar is the existence of a circuit to compensate for the difference in length between the (tropical) solar year of 365.2422 days and the schematic "civil" year of the Aztec calendar of only 365 days. The determination of a calendar correlation depends on the solution of this question, a formula with which every (complete) Aztec date can be converted into an exact date of the ( Julian ) European calendar.

It is controversial among experts whether the Aztecs used a switching mechanism or not. This is due to the following situation.

Soon after the Spanish conquest, the missionaries tried to use the Aztec calendar with the aim of recognizing and combating the "pagan" rites performed on certain days. A parallelization of both calendars was necessary for this. Early authors say this very clearly, so Motolinia, who wrote around 1540: “These (Indians) have already noticed and understood that their year was flawed, and when the Spaniards came, the calendar specialists and the philosophers wanted to consult about the lack of the To eliminate leap year they didn't have ”. In a somewhat earlier text, Francisco de las Navas had reported something similar: “These natives were always confused because they did not have a leap year. ... That is why it is necessary, so that you carry out the leap year as we do and at the same time, that the leap year always ... falls on the year tecpatl ... and always the 15th day of your 3rd month is with the day symbol malinalli which corresponds to February 24th ". February 24th is the leap day of the Julian calendar. This description makes it clear that the idea of ​​a corresponding circuit was an introduction by or under the guidance of European monks. The best authority for Aztec culture, the Franciscan Bernardino de Sahagún, who after several decades of research had completed his Historia General de las Cosas de Nueva España around 1580, writes there for the leap year: “There is another festival that only all four Years is celebrated ... and it is probable and there are suspicions that they performed their leap year on this festival ”. Sahagún made numerous mistakes in his representation of the Aztec calendar, which limit its reliability. He has also developed his own calendar ( Kalendario mexicano, latíno y castellano ) in which he divided the 5 nemontemi over the 18 festival periods, because "with the 5 nemontemi days the Mexicans make a lot of abuse, and they are the ones to get rid of this abuse 5 days have been inserted into the months, resulting in 5 months with 21 days ".

Another circuit method was described by the late 17th century author Gemelli Carreri. “They held a festival for the 13 leap days until April 10,” namely after a xiuhmolpilli of 52 years. This statement was later adopted by others, such as Alexander von Humboldt , who describes the switching mechanism in his work as follows: "At the end of each 52-year cycle, 13 days were switched on."

In any case, switching would have destroyed the close link between the 260-day calendar and the (unswitched) year of 365 days on which the names of the years are based. Modern attempts to resolve this contradiction must therefore either assume a completely nameless, uncounted leap day or a double day. There is no reliable evidence for either.

The fact that there is a series of dates from the colonial period in the Aztec calendar with a clear correspondence in the Julian calendar speaks against a circuit. The dates lie between June 13th, 1518 and February 1st, 1576, thus stretching over a period of almost 60 years in which several switching operations according to whatever system must have occurred. However, all of these data can only be explained without switching. It is also important that in the highlands of Guatemala to the present day calendars are in use among various ethnic groups, in which the 260-day calendar is still synchronized with the Aztec one, which clearly excludes the possibility of skipping days in the form of a circuit.

The idea of ​​switching the Aztec calendar seems to go back to efforts by Spanish monks and their statements describe these attempts and not the pre-Hispanic reality.

The colonial dates to historical dates in the temporal context of the Conquista allow a precise correlation between the Aztec and the European (Julian) calendar. Today the calendar equation developed by the Mexican historian Alfonso Caso is considered the best solution. It reads: year 3 calli, day 1 coatl, day 2 of the Xocotlhuetzi section corresponds to August 13, 1521. Eduard Seler had already developed an alternative beforehand . It differs from the Casos in that it applies to the 3rd day of the Xocotlhuetzi section. In both cases, the daily equation shifts by one day with each leap year that occurs in the European calendar.

If a switching is assumed, the calendar correlation is permanent, without switching shift, because both calendars run in parallel. This does not apply to the calendars artificially developed by Spanish authors with a peculiar structure.

The Aztec calendar belongs to the group of late calendars in western Mesoamerica. Like its neighbors at the same time, but expressed in other languages, it (unlike the late Olmec calendar and the Maya and Monte Albán phases 1 and 2 based on it) had no continuous day count ( long count and therefore no “day 0”). )

The best known neighboring calendar is the Mixtec one . It differs from the Aztec by the naming of the day signs (in Mixtec language ), but the symbols are largely identical. Furthermore, the designation of simultaneous years is one unit of the coefficient lower. In the Mixtec calendar, a special symbol was used to differentiate between the names of the day and the year names. The day names of the birthday were used as sole or additional personal names.