The Duchy of Longueville was a French fiefdom around the capital Longueville in Normandy .

It emerged as the Longueville lordship , which over time was expanded to include Longueville County and finally to a duchy in 1505, before it expired in 1694 when the last duke died. 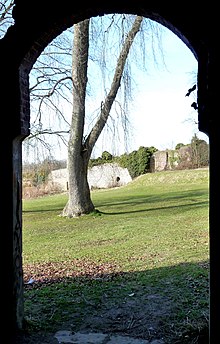 Ruins of the Longueville-sur-Scie castle

It was founded by William the Conqueror as a rule for his confidante Gautier Giffard from the noble family Giffard . At the beginning of the 13th century it belonged to William Marshal, 1st Earl of Pembroke , the regent of England .

During the Hundred Years War , Longueville was confiscated by King Philip IV of France and given to his minister Enguerrand de Marigny in 1305 . In 1314 the county was confiscated again and Marigny was executed in 1315.

Charles V donated the county on May 27, 1364 to Bertrand du Guesclin , the Connétable of France , with the county of Tancarville , which until then was under the county of Longueville, made a royal fief and the city of Montivilliers ( Seine-Maritime ) into the Domaine royal was acquired.

During the English occupation of the country, Longueville was owned by Gaston de Foix , Count of Bénauges . King Charles VII gave them to Archibald Douglas and finally to John of Orléans , the Count of Dunois and companion in arms of Joan of Arc , who bequeathed them to his descendants.

In 1505 the barony of Auffay was united with the county, and this was raised to the duchy of Longueville in favor of François II .

After the heirless death of Duke Jean Louis in 1694, Longueville fell back to the crown ( domaine royal ).