In France , the development of the crown domain , the Domaine royal , from small beginnings to the time when almost the entire kingdom belonged to it, was the decisive means of the political unification of the country up to the implementation of absolutism and centralism . Since the end of Henry IV's reign in 1610, the Domaine royal was identical to the Kingdom of France. Only with the French Revolution and the decree of November 21, 1790 was the crown domain dissolved and transferred to the republican domaine national .

Development of the Domaine royal 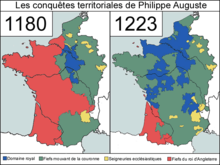 When Hugo Capet ascended to the throne in 987, the domaine royal consisted almost exclusively of royal rights and also of an area that was split into several parts and also could not withstand a comparison with the sphere of influence of, for example, the Counts of Blois and Champagne from 1022.

In the Île-de-France , only the county of Senlis and the Burgvogtei ( Châtellenie ) Poissy were part of the domaine royal, since Hugo Capet gave the counties of Paris , Melun and Dreux to Count Burchard I the Venerable of Vendôme for his support in return had given; Paris and Melun got Hugo's son Robert II back in 1016, Dreux got his grandson Heinrich I back in 1023.

In addition, further south, the counties Orléans and Étampes belonged to the Domaine royal and made up most of the property. In the north belonged the lords of Attigny in the county of Rethel and the important fortress of Montreuil in the Ponthieu .

Only Philip II succeeded in the decisive expansion of the crown domain to the west ( Normandy ) and south ( Loire ), above all through victories against the English ruling there ; his successors Louis VIII and Louis IX. the Poitou and the Languedoc fell to. This contrasted with the introduction of the appanages , with which younger members of the royal family were supplied, and through which the extent of direct access by the king was at times considerably reduced.

In the 14th century about a third of France was under royal administration, in the 16th century it was the acquisition of Bourbon and Brittany , and at the beginning of the 17th century it was property that Henry IV brought with him into office.

Chronology of the growth of the French crown domain

From the reign of Francis I, the terms Domaine royal and France are mixed together. With the betrayal of the Connétable of Bourbon and the assumption of government by Henry IV , the last fiefdoms are incorporated within the borders of the kingdom.