The title of this article is ambiguous. Further meanings are listed under Champagne (disambiguation) .

Geographical location of the historical province

The Champagne [ʃɑ̃ˈpaɲ] is a landscape and historical province in northeastern France . Its historic capital is the city of Troyes . Until 2015, Champagne was part of the Champagne-Ardenne political region and is now part of the Grand Est region .

Champagne is famous for the champagne , which has been pressed in its present form since the 17th century - viticulture has existed here since Roman times . Only sparkling wine from Champagne can the Champagne section shall be listed champagne, everything else is Crémant , Cava , Spumante or champagne . 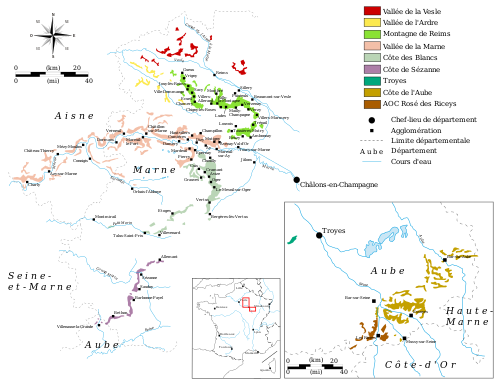 Although champagne is the region's best-known product internationally, vineyards only make up a small part of its agricultural area, concentrated on valley flanks and other mountain slopes in the west ( Marne valley , Montagne de Reims ) and south-east. The vast majority is arable land, the eponymous was ( altfrz . Champs [ tʃɑmps ] = field , from Latin campus ).

The Champagne belongs to the Grand Est region and borders the Hauts-de-France and Île-de-France regions to the west and Bourgogne-Franche-Comté to the south .

The most important rivers of the Champagne originate in the mountainous lands of their eastern edge and flow through them roughly parallel to each other in a large arc, first northwards, then more westwards. From north to south these are

Between Aisne and Marne, the rivers Retourne , Suippe and Vesle , which have their source in the dry Champagne (see below), flow in parallel . The Somme-Soude , the Tourbe and other smaller rivers flow partly or entirely at right angles to this main direction. Despite the eponymous drought, there is an important swamp area in the southwest of the 'Champagne sèche' , the Marais de Saint-Gond , the headwaters of the Petit Morin . 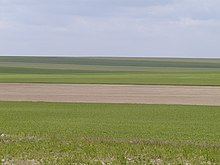 In the Champagne crayeuse , which geologically goes back to deposits from the Cretaceous period , calcareous soils predominate, which are mainly used for large-scale grain and sugar beet cultivation.

The Champagne lies in the north-east of the plain land of the Paris Basin and comprises three different landscape characters:

The western part is formed by the steep fault line on the edge of the Île de France , the "Côte de l'Île de France", also called Montois ("the mountainous"). It consists of the limestone steps of the Montagne de Reims north of the Marne and the Côte des Blancs , "slope of the whites (wines)", south of the Marne on the eastern edge of the Brie , and its less high but no less wooded continuation, the Bassée on both sides of the valleys from Aube and Seine.

This is followed by the other partial landscapes in a semicircle: First there is the extensive basin of "dry Champagne" ( Champagne sèche ), also known as "lousy Champagne" ( Champagne pouilleuse ) or "chalky Champagne" ( Champagne crayeuse ). It is characterized by broad hills, mostly completely covered by huge fields, which rise only very gently (inclined plane), but because of their great extent can reach heights of more than 100 m. In the late Middle Ages and early modern times, the water-permeable soils were severely depleted . After this was remedied in the 19th century through ecological measures (reforestation of hilltops) and improved fertilization, monumental silo systems now testify to the yields of agriculture.

In the east, the humid Champagne (Champagne humide) adjoins, in the form of the rain and wooded elevations of the Argonne and the plateau of Langres . The plateau of Bar in between also belongs geologically to this arch, but in political history the Duchy of Bar (Barrois) was an independent territory.

The traditional farmhouses of Champagne are particularly common in the Troyes area , often as part of multi-sided courtyards . The typical Western European half-timbering with narrow, high compartments (in contrast to the almost square ones of the Central European half-timbering) and the low roof pitch are striking .

In ancient times, the Champagne region was the settlement area of ​​the Celtic Catalauni. After the conquest of Gaul (58–51 BC) by Gaius Julius Caesar , it became part of the Roman province of Gallia Belgica . During the decline of the Roman Empire , the Roman general Flavius ​​Aëtius ended the advance of the Huns under Attila here in the Battle of the Catalaunian Fields in 451 .

The baptisms of the first Christian Frankish king Clovis I (496), by Saint Remigius of Reims , and later by Louis the Pious (816) have been handed down. Alongside Saint-Denis , Reims became an important religious center in France. Until 1825 all French kings were crowned and anointed in Reims Cathedral. During the Middle Ages, Champagne formed a county whose counts were among the most powerful princes in France. The large trade fairs in Reims and Troyes made the region one of the most economically important in Europe. The textile and metal industries developed here in the 18th and 19th centuries, some of which lost their importance after 1930 and completely after 1970.

During the First World War , the front between the German and Allied troops ran north of the Reims – Sainte-Menehould –Verdun line through the “Lausechampagne” (since there was only arable farming and no viticulture as between Reims and the Marne). After the front froze in autumn 1914, battles with heavy losses ensued (September 1914: Marne battle , February / March 1915: winter battle in Champagne , September / October 1915: autumn battle in Champagne , April 1917: battle for the Mont Cornillet massif , September / October 1918: Allied offensive), with the exception of the final battle in 1918 without any noteworthy front shifts (see also Battle of Verdun ). Many cemeteries and memorials still bear witness to the war there today. A significant part of the old battlefield is now used as a training and bombing area for the French army, but can be visited publicly every two years.