This article covers the commune in France. For the board game, see Troyes (game) .

Troyes [ tʀwa ] is a municipality with 61,652 inhabitants (as of January 1, 2017) in north-eastern France and the administrative seat of the Aube department in the Grand Est region . Troyes is on the Seine .

Troyes was the chief town of the Celtic tribe of the Tricasses ( Tricassii or Tricasses ) and was called by the Romans Augustobona Tricassium or Augustomana Tricassiorum (in Ptolemaeus ). In the 4th century the city became a bishopric (see: Diocese of Troyes ). To the west of Troyes, the battle took place in the Catalaunian fields between Attila and Aëtius in 451 .

In the early Middle Ages , the bishops of Troyes were the city lords. In 889 the city was destroyed by the Normans . In the 10th century Troyes developed into the center of the County of Troyes , which was owned by the Count House of Vermandois , a line of the Carolingians . The Counts of Troyes replaced the bishops as city lords. At the beginning of the 12th century they took on the title of Count of Champagne . 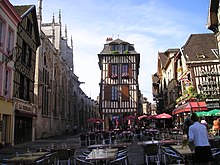 Exterior of the cathedral

In the city worked among other things Rashi (1040-1105), one of the greatest Jewish scholars of the Middle Ages. His famous commentaries on the Bible and the Talmud , which he wrote in Troyes, are still printed in most of the Jewish Bibles and in the Talmud. Furthermore, the medieval poet Chrétien de Troyes (around 1140-1190) worked in the city - at the time when Troyes was the residence of the Counts of Champagne. The Parzival story about the search for the Holy Grail goes back to Chrétien de Troyes .

In 1107 a council was held in Troyes at which the Gregorian edicts relating to the investiture were renewed. 1129 another council of Troyes was held here.

From the 12th century onwards, Troyes held two of the six fairs or fairs for which Champagne became famous. Goods from the Netherlands (cloth) to Italy ( silk , oriental goods) were traded here. One of the first European money markets was organized under the Counts of Champagne, who had made Troyes their capital.

During the Hundred Years War (1337-1453) the importance of the city waned. Troyes was in English-occupied territory. Not least for this reason, the Treaty of Troyes was signed here on May 21, 1420 . With this treaty, the King of France Charles VI allied . (at the instigation of his wife Isabeau ), the King of England Henry V and the Duke of Burgundy Philip III. to exclude the Crown Prince and later Charles VII of France from the line of succession. Henry V received with the hand of Catherine , the daughter of Charles VI., The claim to the French throne after the death of his father-in-law and until then the reign in France. In 1429 the English were expelled and Joan of Arc was able to lead the Dauphin to Reims for his coronation .

In the late Middle Ages and the early Renaissance, Troyes rose to become one of the most important centers of sculpture, where the masters of Chaource and Jacques Bachot, among others, worked.

On May 24th, 1524 there was a devastating fire that left a large part of the city to rubble and ashes.

The city was further weakened by the shift in trade from land to sea. Troyes changed from a trading center to a center of the textile industry in the 16th and 17th centuries. At the same time, the city became one of the strongholds of the Huguenots and therefore badly hit by the repeal of the Edict of Nantes in 1685.

The Edict of Troyes , issued by Louis XIII. , determined in 1630 that the cities of Clairmont and Montferrand were to be merged to form a city called Clermont-Ferrand . It was 101 years later by Louis XV. approved.

During the campaign of 1814 in the final phase of the Napoleonic Wars , Troyes was important as one of the main points of operation for the Austrian army.

Description: A diagonal white bar in blue with a meander border on both sides. Three golden lilies in the blue head of the shield .

The city lives economically mainly from tourism, from the local smelting works and from the textile and rubber industry. Furthermore, viticulture is operated. The grapes are pressed almost exclusively into champagne .

The company Devanlay ( Lacoste ) with textile factories is based in Troyes with over 1000 employees . Devanlay SA is one of the last textile companies producing in France. Polo shirts , T-shirts, pullovers, shirts and various other items of clothing are made there for the Lacoste fashion company.

The troy ounce refers to Troyes. 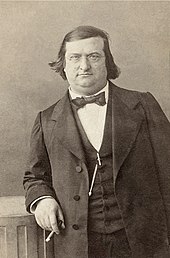 Commons : Troyes  - collection of images, videos and audio files
Municipalities in the Arrondissement of Troyes (A – L)

Municipalities in the Arrondissement of Troyes (M – V)