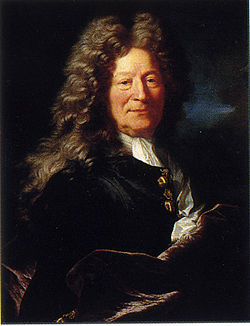 Girardon initially worked in Paris in the studio of the sculptor François Anguier and later went to Rome . On his return in 1650 he was appointed the first inspector of sculptures . In 1659 he was appointed professor at the Académie royale de peinture et de sculpture and in 1695 he also became chancellor there. François Girardon died on September 1, 1715 in Paris at the age of 87.

Girardon is one of the most important artists of his time. He was one of the leading artists who played a key role in the design and sculptural decoration of the palace and park in Versailles . He was considered excellent in composition and in the expressive representation of the heads. Most of his works also show a thorough study of antiquity, and as a result, Girardon was considered far more popular in contemporary art criticism in France than Gian Lorenzo Bernini , who followed a typically Italian high-movement Baroque ideal, while in France a more moderate classicist style was cultivated.

From a nationalistic point of view of German-speaking authors of the 19th century it was once criticized that one had to deny him "wealth of invention and criticize his overly theatrical manner of representation" and one looks for "deeper spiritual expression ... with Girardon in vain" (see references). This ultimately very derogatory criticism is probably born of nationalism, which was not unusual in the last quarter of the 19th century. Over 100 years later, various of his works are ranked among the most important in the history of sculpture.