The title of this article is ambiguous. Further meanings are listed under Pluton (disambiguation) .

Pluton ( Greek  Πλούτων , Latin also Pluto ) is the god of the dead in the depths of the earth in Greek and Roman mythology . 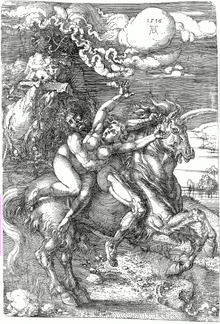 Pluton largely corresponds to Hades . Plutus , the god of (subterranean) wealth, was often equated with him . Whether and how the three - Hades, Pluton and Plutos - were originally differentiated can hardly be said today. Plato, for example, thinks that Pluton / Plutos can be seen positively as the giver of wealth, but Hades is the name of the invisible deathbringer, whose name people did not dare to name and which they therefore euphemistically called Pluton. In any case, one difference can be identified:

In contrast to Hades, Pluton was worshiped variously together with Demeter and Kore . A sanctuary of Pluton is called a Plutonion . It has therefore been assumed that Pluton originated from Eleusis and that the spread of his cult was the expression of a new image of God corresponding to the message of the Mysteries. In any case, the inscriptions of the early Pluton cult point to Attica and the area around Eleusis.

Pluto entered Latin literature as the kidnapper of Proserpine (= Greek Persephone ), with the shaping of the myth by Ovid having a formative effect . According to Greek myth, Pluto became the ruler of the underworld after Jupiter (Greek = Zeus ) wrested control of the world from their common father Saturnus (Greek = Kronos ) and she and his older brothers Neptunus (Greek = Poseidon ) and Pluto had shared.

The Roman underworld gods often equated with Pluton are Dis , Orcus and Eubuleus .