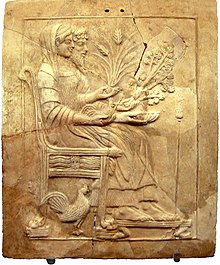 As Plutonion ( Greek  Πλουτώνιον , latin plutonium ) is a sanctuary of pluton , respectively. The actual sanctuary was usually a cave, a place where toxic underground emissions occur, or both. As far as is known, cult buildings date from later times. There is no precise distinction between the sanctuaries , which are dedicated to Charon , the ferryman of the underworld, and are known as Charonion .

In contrast to Hades , which is equated with Pluton , of which (few) holy areas but hardly any cultic veneration is known, the cultic veneration of Pluton in connection with the cults of Demeter and Persephone is attested in several places, in particular the Plutonion of Eleusis .

The Greek geographer Strabo names three other sanctuaries of Pluton:

Plutonion in Eleusis with later stems

Pluton or Hades is linked to the mysteries of Eleusis through the myth of the robbery of Persephone . Accordingly, in the district of Eleusis there are several natural caves that were considered to be entrances to the underworld and temenos of Plutons. Otto Rubensohn suspected that the rock formation of the Eleusinian Plutonion was identical to the Agelastos petra ( Ἀγέλαστος πέτρα ), the "stone without laughter" on which the desperate Demeter rested in her search for the stolen daughter.

Little remains of the sanctuary from the time of Peisistratos , as it was built over in Roman times. The so-called Eubuleus bust was found here in 1885 , which is now believed to represent not the figure of the Eleusinian myth, but Alexander the Great .

In Plutonion near the place Acharaka (today Salavatli), belonging to the urban area of Nysa am Mäander , not far from Tralleis , there was a sanctuary of Pluton and Persephone, a sacred grove , and the Charonion (after Charon ), a cave sanctuary to which Strabon ascribes unique properties (sulfur healing springs). Sick people who sought healing there would take quarters in the nearby village and the priests of the gods would direct the therapy in a dream with the help of the gods. Often the sick would be brought to the cave for incubation sleep, after which the priests would interpret the sick people's dreams and derive clues for further treatment.

In addition, a celebration takes place every year in Acharaka, during which naked ephebes steal a bull at night, bring it into the cave and then release it, but after only a few steps the bull falls over and dies.

The plutonion in Hierapolis in Phrygia, Asia Minor near today's Pamukkale , famous for its calcareous sinter terraces , does not seem, unlike the plutonion of Acharaka, to have been a place of healing, but rather, according to Strabon's description, a place of spectacle. Carbon dioxide escapes from a relatively small cave, which, being heavier than air, collects in a paved square in front of the cave. Strabon writes that an opaque haze collects in the square, so dense that the ground is barely noticeable. Animals brought into the square, even bulls, would die instantly. He himself had tested the lethality of the haze with sparrows, which were apparently sold for precisely that purpose in the auditorium surrounding the square.

The cut priests of the Cybele, on the other hand, would not only enter the square, but would also go to a certain depth in the cavity without being damaged. Not without cautious irony, Strabo wrote that although he had noted signs of strained breathing on the priests, their survival in this deadly environment was possibly due to divine grace or effective antidotes.

In 2018, the German volcano biologist Hardy Panz from the University of Duisburg-Essen published a study in which he proves that in the morning and evening hours near the floor of the shrine, carbon dioxide actually accumulates, for animals that cannot hold their heads high enough , are fatal. The priests of the time knew the effect and were able to use it as well as protect themselves from it by holding their heads up or stepping on a stone.

Aeneas and the Cumaeische Sibylle , in the background the Avernersee ( William Turner , 1814/15)

As far as the Avernersee is concerned, Strabo seems undecided: on the one hand, it was a place where there was volcanic outgassing, so that supposedly birds that wanted to fly over the lake fell dead into the water. Something similar is reported about the river Eridanos , which is sometimes considered the river of the underworld. On the other hand, the Avernersee as a place of worship at the time of Strabon was already completely fabulous. According to tradition, there was Cimmerium , the seat of Carmenta , the Cimmerian Sibyl, nearby . There would have been an oracle for the dead deep under the earth, to which those seeking advice were led by the Cimmerians living in caves through spacious corridors.