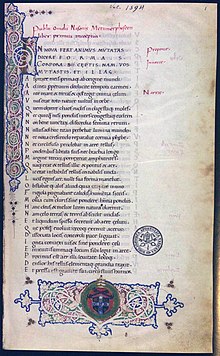 The Metamorphoses (Latin original title Metamorphoseon libri : "Books of Metamorphoses") of the Roman poet Ovid , written probably from the year 1 or 3 AD to around 8 AD, are a mythological work written in hexameters about metamorphoses (" Metamorphoses ”). They consist of 15 books of about 700 to 900 verses each and describe the origins and history of the world in terms of Roman and Greek mythology . About 250 legends were processed. The Metamorphoses have always been one of the most popular mythological works of all and certainly the one best known to medieval writers and poets. Thus this work had an enormous influence on the literature of the Middle Ages as well as on the visual arts from the Middle Ages to the Baroque .

Ovid chooses the metamorphosis stories that are often found in myths on the subject, in which mostly a person or a lower god is transformed into a plant, an animal or a constellation ( cadastre ). The work begins with the emergence of the world out of chaos and a great flood, which only a couple of humans ( Deucalion and Pyrrha ) survive, and it ends with the transformation of Caesar's soul into a star . Ovid moves from example to example by working his way through mythology; he often jumps from one story of metamorphosis to the next in a seemingly random manner. In truth, however, the transitions between the individual metamorphosis sagas are extremely artistic. He combines central scenes of Greek mythology with more remote myths.

Metamorphoses occupy a central place in Ovid's 30-year creative period (approx. 15 BC until his death in 17 AD) .

In the first half of his oeuvre Ovid mainly worked in elegiac distiches , e.g. B. in the amores ("love poems"), the epistulae heroidum ("letters from heroines") and in the ars amatoria ("love art"). An exception is the tragedy Medea , which has not survived except for a few verses .

For the metamorphoses , Ovid chose the hexameter and thus clearly committed himself to the epic . Nevertheless, he does not process purely epic material: playfully (as "Lusor") and with the highest literary demands, in the manner of a poeta doctus , he interweaves historical, elegiac and didactic elements with the epic framework in his metamorphosis sagas with the epic framework that he redesigned and incorporated ironized to a large extent. So he parodies the catalog of heroes typical of the epic in the Actaeon episode: Instead of a list of heroes and their attributes, here is a detailed description of the Actaeon's dogs , which hunt and kill their master, who has been transformed into a deer .

The work comprises 15 books with around 12,000 verses and is therefore epic. At the time of his exile (e.g. epistulae ex Ponto ), Ovid turned back to the elegiac distich.

Ovid's interest in mythical subjects was already evident in earlier works . For the metamorphoses , a large number of collections of myths is proven today as templates for almost all of the approximately 250 metamorphoses . The Greek collection of Nicandros from Colophon from the second century BC with the title Heteroiumena , as well as the Metamorphoseis of Parthenios, should be emphasized . Both are catalog poems. Presumably with the help of a friend, Aemilius Macer , Ovid was also able to use at least one work that worked on a thematic selection: the Ornithogonia by Boio / Boios , a Greek poem that has only survived in part and which tells of the transformation of people into birds .

Ovid lived through the last period of the Roman civil wars and the transition to monarchy and then - during his own creative period - the heyday and finally crises under Emperor Augustus. The transition to sole rule (until 17 BC) had been criticized in their poetry by elegists such as Gallus , Properz and Tibullus . Ovid followed their example when peacetime slowly became mind-paralyzing autocracy , and covertly criticized the emperor's narrow-mindedness. The possibility of criticism was probably an important factor in the development of the metamorphoses . But they are also interpreted as allegories for the alleged return of the Golden Age under Augustus.

The emergence of the world, the world ages , Deucalion and Pyrrha ( Flood ), Pyramus and Thisbe , the Lycian peasants , Daedalus and Icarus and Perdix , Philemon and Baucis , Battus , Narcissus and Echo , Orpheus and Eurydice , Apollo and Daphne , Phaethon , Niobe , Iphis and Ianthe , King Midas with the music contest between Pan and Apollo , Pygmalion , Jupiter's affairs with beautiful women (especially Europe , Io , Callisto , Leda and Leto / Latona ), the Dioscuri (Castor and Pollux), Perseus and Andromeda , Jason and Medea , Pythagoras , Caesar and Augustus .

Structure of the metamorphoses and selected transformations

The Metamorphoses of Ovid are divided into 15 chants (books) with 7 to 18 chapters each, which are listed below in full in tabular order. The chapter headings are followed by selected metamorphoses from the respective books, naming the people involved (transformers and transformed), the plants or animals into which the person is transformed, and the reason for the metamorphosis. The first verses of Reinhart Suchier's translation are quoted in every book .

Book 1 (779 verses): “Pleasure becomes agitated to song as forms / changed into other bodies. Gods, oh are you - you too have changed them / inclined to my beginning, and from the very beginning of creation / until our time the poem leads a continuous thread. "

Book 2 (875 verses): “Sol's castle stood stately elevated on towering pillars / bright of flashing gold and of flame-like pyropus. / Shiny ivory adorned the pediment above; / The two gate leaves shone brightly in the light of the silver. "

Book 3 (733 verses): “The god, freed from the shell of the deceptive bull /, had long since discovered himself and inhabited dictayal corridors / when ignorant Agenor ordered to look for the abducted woman / Cadmus the son and, he found it they don't, as punishment, banishment ... "

Book 5 (678 verses): “Narrated as such in the midst of the crowd of the Kephenen / Danaes divine son, suddenly an urgent crowd / roaring fills the princely hall. But not a wedding celebration / announces the rising noise, it points to grim weapons. "

Book 6 (721 verses): “Tritonia had carefully listened to this story / and approved the singing and anger of the Aonic girls. / "There is little praise," she began to herself, "I myself must be praised, / and heavily atone for the guilt who mocks our Godhead." / On the Arachne Geschick, the Maionerin, she ponders in her mind ... "

Book 7 (865 verses): “Already with the Minyern the pagasian keel drove through the sea tide, / Phineus was already visited, who dragged the old age helplessly / in perpetual night, and scared away by Aquilo's sons / the maidens were from the mouth of the tormented Old man, / and after some danger was among the hero Jason ... "

Book 8 (884 verses): “When now the clear day, shooing away the nocturnal hours, / Lucifer opens up again, there the east lies down, and it lifts / damp clouds. The cephalos beut and the sons of Aiakos / return journey peaceful south, from which they happily driven ... "

Book 9 (797 verses): “What made him sigh and why his forehead is mutilated, / asked the god the Neptunian hero. So / Kalydon's stream spoke up, wrapped around the unleashed hair with reeds: "

Book 10 (739 verses): "There goes, wrapped in the saffron garment, Hymenaios / through the infinite air and turns to the Kikonen / coast and is uselessly called by Orpheus' voice."

Book 11 (795 verses): “While with such a poem the Thracian singer / lured the forest trunks and the savages' minds and the following stones, / look, there are perceived iconic women, the wild / breasts covered with furs from the top of the hill Orpheus, / like a melodious song he joined the struck strings. "

Book 12 (628 verses): “Priam, not yet aware that he lived bearing wings, / mourned Aisakus; Hector also brought sacrifices at the unmarried grave, which the name indicated, at the same time as the brothers / / Paris, however, was not present at the sad honor ... "

Book 13 (968 verses): “When the princes sat down and the people stood around in a circle, / appeared before them the hero with the seven-layered shield, / Aias, and the anger ineffectual, the dark eye / on the Sicilian beach and straightened the boat on the beach, / he holds out his hand and says: "O Iupiter, here at the ships ..."

Book 14 (851 verses): “Aitna's heavy mountain, which lies on a gigantic throat, / and the Cyclops area, which knows nothing of the karst and the plow / use and owes nothing to yoke-bearing bulls, was left behind by the Euboians, the inhabitants of swollen water; "

Book 15 (879 verses): “The question arises in the meantime, who will carry away the difficult office / burden and replace the place of such excellent king. / Fama, the harbinger of true success, determines the realm of the famous / Numa. For him it was not yet enough to know the Sabine people / customs; ... "

Individual persons from the work can be identified from the list of figures in Ovid's Metamorphoses . 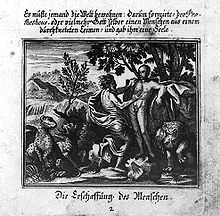