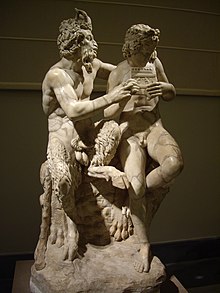 Pan ( ancient Greek Πάν , Arcadian Πάων Paōn , "shepherd") is the shepherd god in Greek mythology . In terms of shape, he is a hybrid of a human upper body and the lower body of a ram or a billy goat.

He is the god of the forest and nature. The shepherds revere Pan but are afraid to see him. But as the god of forests and meadows, they ask him for protection for their flocks and make sacrifices for it. His preferred abode is Mount Lykaion in Arcadia , where he had a sanctuary.

In his hands he carries a crooked shepherd's staff or a seven-tube flute, the pan flute . The curved shepherd's staff symbolizes the nature of things in themselves and their cycle (e.g. the return of the seasons). Other forest gods with goat feet are called Aegipans.

Pan enjoys music, dance and happiness. The noon hour is sacred to him, however, and he can get very angry if you disturb him at this time. He then hunts z. B. resting herd animals in "panic fright" to sudden mass flight, from where the word panic is derived.

In some stories Pan is also assigned to the retinue of Dionysus , the god of fertility and ecstasy, where he makes music with his flute and thus enriches the celebrating audience. Known for his lust , he is surrounded by nymphs and satyrs .

Pan's special love is for the moon goddess Selene .

There are several versions of the ancestry of Pan:

According to the most famous, Pan was a son of Hermes and a daughter of Dryops or Dryope . When his mother discovered after the birth that her son had goat feet, horns and a beard, she was so frightened that she fled from him, but he was brought to Olympus by Hermes. But because Pan was not given a place in Olympus, Hermes brought him back to earth on the island of Crete .

Invention of the pan flute

Pan pursued the nymph Syrinx , drunk with love , who fled from him. Their escape ended abruptly at the Ladon River , where they suddenly turned into a reed, which Pan then embraced. When the wind blew into the pipe, plaintive noises came out. Pan didn't want to lose the sounds, so he broke seven pieces from the reed, each one a little shorter than the previous one, and tied them together. So he invented the shepherd's flute, which he named after the nymph Syrinx .

In Ovid's Metamorphoses , the story of the musical contest between Pan and Apollo reported. The judge was the mountain god Tmolos . He declared Apollo the winner, since the instrument Apollos, in Ovid's case a lyre , is placed above the panpipe. King Midas , who happened to hear the game of Pan, disagreed with the verdict. Apollo was so offended by this that he punished Midas with dog ears.

JS Bach set this musical competition to music in his secular cantata “ The dispute between Phoebus and Pan ” ( BWV 201 - Geschwinde, ihr whirling winds ).

Plutarch reports that at the time of Tiberius an Egyptian helmsman named Thamus heard a voice off the Greek coast, which ordered him to announce in Palodes that “the great Pan had died” ( Ὁ μέγας Πὰν τέθνηκε , Ho megas Pan tethnēke). As soon as the ship was level with Palodes, the helmsman called the news across the water, after which many voices had wailed. After his return, Tiberius heard about it and took the story so seriously that he had investigations carried out. Thus Pan would be "the only god who died in earthly times."

Salomon Reinach suspected a misunderstanding and that the complaint related to the death of Tammuz : θαμοῦς πάνμεγας τέθνηκε ( Thamos panmegas tethneke "the infinitely great Tammuz is dead!"). It was countered, among other things, that the name of Tammuz in Greek was Adonis .

In the Christian Middle Ages, the iconography of Pan was adopted to represent the devil. In the process, the attributes of goat feet and headphones , which had previously had a positive connotation, were reinterpreted as a sign of Dionysian intoxication and lust when they were incorporated into Christian medieval iconography in the sense of a negatively interpreted “lust”.

Pan is a key figure in the film Pan's Labyrinth (2006) by Mexican director Guillermo del Toro . However, in the Spanish original, it is not the shepherd god himself, but an ordinary faun who guides Ofelia through the film (called El fauno in the film ). In order to avoid confusing the words faun and fawn (German: fawn), which sound the same in English, the name was changed to Pan in the English version, which was later adopted by the German synchronization.