Hippomenes ( ancient Greek Ἱππομένης ) is a figure from Greek mythology . 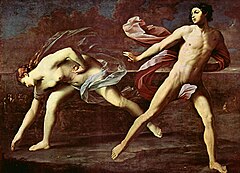 He was the son of Megareus and Merope or a son of Ares . He is known from the legend of Atalante , the hunting maiden, who has often been compared to Artemis himself. She let every suitor who desired her contest a race against her. If the suitor won, she took him as her husband, but if he lost, she killed him. Hippomenes, who had never seen Atalante but was in the audience of a race, at first could not understand the eagerness of the candidates, but when he saw Atalante, he too was impressed by her beauty.

He immediately took a liking to her and, hoping the gods might protect him, decided to take part in the competition himself. When he announced this to Atalante, she wanted to dissuade him from this plan, as she saw in him a splendid young man who was not worth dying like that. However, he could not be changed, and so the competition was imminent. Hippomenes prayed to the goddess of love Aphrodite that she would let him win, and this prayer was also answered: the goddess brought three golden apples and taught him to use them.

The race began and the two opponents stayed tied. Hippomenes' powers slowly weakened when Aphrodite appeared and told him to drop one of the apples. He did as he was told and confused Atalante so much that she picked up the apple and lost time. He repeated this twice and won the competition. Atalante, who herself was happy to marry such a worthy young man, was happy to enter into a marriage with him.