The title of this article is ambiguous. Further meanings are listed under Pelops (disambiguation) . 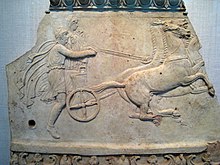 In Greek mythology, Pelops ( Greek  Πέλοψ ) is the son of King Tantalus , brother of Niobe , Broteas and Daskylos, according to the current but younger genealogy . An older tradition seems to have taken him as the son of Hermes . In the myths, however, his origin from Asia Minor is undoubted and he is called Lydians , Phrygians or Paphlagonians , even Dardanians .

Pelops was cut into pieces by his father Tantalus and cooked before the gods as food to put their omniscience to the test. But the gods saw the deception and left the meal untouched; only Demeter , who was not quite in her mind because of the mourning for her daughter Persephone , consumed a shoulder. Zeus then ordered Hermes to put the pieces back into the cauldron, from which Clotho then pulled the boy out in renewed beauty. Demeter replaced the missing shoulder with an ivory one, which is why all descendants of the Pelops - the Pelopids - had a white mark on their shoulders as a hereditary mark of their gender. Tantalos was banished to the Tartaros as punishment and exposed there to the proverbial tantalos torments. The Greek poet Pindar, on the other hand, says that the true background of the events was simply that Poseidon kidnapped his darling Pelops to Olympus , which is why the alleged voracity of the gods can only be understood as a malicious lie of envious neighbors.

Grown up into a handsome youth, Pelops came to Pisa in the Elis as a suitor of Hippodameia , the daughter of King Oinomaos . Oinomaos had already defeated many of his daughter's suitors in the chariot race and then killed them (different version, stabbed from behind during the race). With the help of the winged horses that Poseidon had given him (whose lover he is said to have been at times), or through the faithlessness of Myrtilos , Oinomaos' charioteer, Pelops won the victory and thus also the hand of Hippodameia. When Myrtilus then demanded the conditional reward for his betrayal, he was thrown into the sea by Pelops near Geraistos on Euboea . In death, Myrtilus cursed his murderer and all of his descendants, and it is from this outrage that the curse is also written, which from then on rested on the house of Pelops and which became fertile material for the tragedy writers . This curse continued especially in his two sons Atreus and Thyestes , who were bound in mutual hatred throughout their lives.

With the murder of Oinomaos, Pelops became king of Pisa.

The sex of the Pelopids

With the nymph axioche begot Chrysippos whose rape by the Theban king Laius on the prehistory of the Oedipus saga belongs.

Pelops of Pisa extended his rule first over Olympia , where he renewed the games, then over Arcadia .

The entire southern peninsula of Greece was given the name Peloponnese (literally “Pelops Island”) from him , and he was highly revered before all heroes. His tomb was found at the Alpheios near Pisa.

When Saint Vincent Ferrer visited the Spanish town of Morella in 1414, the woman with whom he was staying wanted to serve him a meal that corresponded to his rank. However, since she was too poor to buy meat, she simply slaughtered her own son and presented him to her high guest. When Vincent Ferrer saw through the situation, he put the boy back together and brought him to life. However, from now on he was missing a little finger: his mother had tasted whether the dish was seasoned enough. ... With this legend, the Pelops myth is evidently received hagiographically , albeit in a different form .