The Olympus ( Greek Όλυμπος [ ɔlimbɔs ]) is the highest mountain in Greece . The massif, consisting almost entirely of Mesozoic limestone , is located on the east coast of Greece, in Macedonia (or Thessaly ) not far from the place Litochoro , approx. 20 km south of the city of Katerini . In Greek mythology , Olympus is the seat of the Olympian gods .

The highest peak is the Mytikas (also: Mitikas ) ( 2918  m ), followed by the peaks Skolio ( 2911  m ), Stefani ( 2909  m , sometimes referred to as "Zeusthron") and Skala ( 2866  m ). Between Skala and Mytikas there is Kakoskala , a ridge over which the Mytikas can be reached by easy climbing. The highest chapel on the Balkan Peninsula is located on the Profitis Ilias sub-peak .

The mountain range has its very own flora and fauna . That is why it was placed under nature protection as early as 1938 and declared a biosphere reserve by UNESCO in 1981 . Since 2014 it has also been on the tentative list for inclusion as a mixed cultural and natural heritage site in the UNESCO World Heritage .

There are different views on the meaning of the name "Olympus". Olympus is translated as “heaven”, “the shining one”, “the high one” or “the rock”. According to the lexicon of the modern Greek language of the linguist and philologist Georgios Babiniotis, the word is a pre-Greek place word of unknown origin, the old meaning of which could have been simply " mountain ". The German linguist Michael Janda , on the other hand, sees it as a genuinely Indo-European compound: * ṷolun-ph₂os is formed from * ṷel- "enclose" and * pah₂- "protect" and thus has the meaning "protecting the enclosure", which refers to the function of Olympus referred to as the world mountain separating mortals from gods. In Turkish the mountain is called Semavatevi , which means something like "home of heaven".

In Greek mythology , a place called "Olympus" is where the gods lived and its summit was imagined to be filled with light. It simulated the sky concept of Greek mythology and was inhabited by gods, descendants of the gods and servants. In a narrower sense, twelve gods were considered Olympic gods .

However, this mythical "Olympus" is not necessarily synonymous with the real existing mountain. In Homer's Odyssey , the term Οὔλυμπος Oulumpos is only a general name for the place where the gods live or a synonym for οὐρανός, ouranos , heaven, but not a specific, real place.

In fact, the highest peaks in the area were then called Olumpos in many ancient Greek places , e.g. B. Uludağ , Lykaion , Tahtalı Dağı , or the Cypriot Olympus .

It was not until the 5th century BC that Herodotus referred to the Thessalian Olympus described here as the place of residence of the gods.

The area at the foot of Mount Olympus has been populated since the Neolithic . Settlement remains have been excavated in many places. The most important excavations took place in Dion . Another ancient place is Leibethra , about 17 kilometers further south near Leptokarya . In 2016, the Leibethra archaeological park was opened, which is dedicated to the mythological themes of Orpheus and Muses and the early settlement in the Neolithic and the surrounding nature. A little further north are the ancient sites of Pydna , Louloudies and Methone .

Especially in the high mountain area, some endemic plant species have been preserved on Olympus. There are about 30 types of orchid , gentian , armored pine and boxwood, as well as Jancaea heldreichii , a Gesneria plant that is to be regarded as a tertiary relic . Another endemic to Olympus is the hornwort Cerastium theophrasti . In addition, u. a .:

The fauna of Mount Olympus has not yet been systematically researched. It includes a variety of rare and threatened species. The large mammals such as the deer that used to live in this area have largely disappeared. In August 2008, what is believed to be the last bear on Mount Olympus was shot by a poacher.

There are 32 different species of mammals, including: B. chamois , deer , wild boar , wildcat , stone marten , red fox and squirrel . 108 bird species were registered. Many of them, especially the birds of prey, are rare and are subject to the strict national animal welfare law.

In the river beds and lakes, 22 species of reptiles typical of Greece and 8 species of amphibians can be found. There is also a large variety of insects, especially butterflies and horseflies . 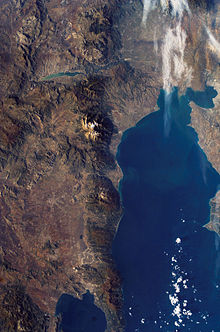 The mountain range can be reached via the motorway and the country roads that connect the towns and villages around the mountain, by rail ( Athens – Thessaloniki line ) or by bus from Athens or Thessaloniki. The nearest train stations are those of Katerini , Litochoro and Leptokaria. The KTEL bus company maintains several lines in the region . The central taxi rank is in the main square of Litochoro.

The nearest international airport is 80km from Katerini and 150 km from Elassona remote "Macedonia" Thessaloniki Airport .

View to the east

The European hiking trail E4 leads west of Litochoro through the Enipeas gorge to the summit. There is also the Greek hiking trail O2, which connects the peaks with the Pelion peninsula in the south.

Mount Olympus is one of the most popular mountains in Greece, it attracts visitors from all over the world. You can explore it on foot on the roads and paths of the Olympus National Park that cross the mountain range.

In June 2016, the National Park Administration opened the Olymp National Park Information Center . It is located about one kilometer above Litochoro. Visitors are informed about hiking and mountaineering, archaeological sites, mythology, monasteries, plants, animals and others. Information material and maps of the national park are provided free of charge. Admission (as of September 2017) is free.

There are several developed trails and some mountain huts for mountain hikers. The mountaineering trails of Mount Olympus start in Litochoro, in Dion , Karya (internal Greek long-distance hiking trail O2) and Petra. The time between June and the end of September is best for hiking. During this time, the huts near the peaks are open and the weather allows the ascent without snow equipment. The ascent to the high peaks can only be mastered by experienced mountain hikers.

The two most famous trails for exploring Mount Olympus start in Litochoro and go all the way to the peaks of the mountain. The first follows the Enipeas gorge and leads past the monastery of St. Dionysius to Prionia (at an altitude of 1100 m). Where a wood saw mill used to be in operation, there is now a restaurant, a spring and parking spaces. This place can also be reached by car. From Prionia, following the well-signposted European hiking trail E4, the hiker arrives after about three and a half hours at the main hut of Mount Olympus, Spilios Agapitos (at 2100 m altitude). From the hut the path E4 continues, which in about three hours leads to the Skala summit of Mount Olympus. The way from Skala to Mytikas in about 45 minutes requires climbing and a head for heights and should not be done without a rockfall helmet.

On the mountain path to Prionia, about ten kilometers from Litochoro, at the Stavros square , there is the Dimitris Butolas hut (at an altitude of 944 m). Four kilometers before the end of the path to Prionia, at the Kortsia square (1120 m), where there is a car stop, a second, different path begins, which leads to the peaks of Mount Olympus. After having passed the places Barba , Petrostrunga , Skurta and Lämo , after about five hours of walking you arrive at the “Plateau of the Muses” at an altitude of 2600 meters. There are two huts there: Jossos Apostolidis and Christos Kakalos . From there you can reach the summit in about an hour.

Paths to the summit

The southern peaks of Mount Olympus

The following routes describe the classic ascent to the summit:

From 1100 meters you come to the Spilios Agapitos hut at 2100 meters on a path through pine and beech forest. From the hut to the peaks of Skala, Skolio, Sankt Anton and the most difficult, Mytikas, you first move through the forest and later through the alpine area. There is a wide path from the hut to Zonaria, Mytikas, Stefani and the “Plateau of the Muses”, but sure-footedness (sticks!) Is a must on the way down over the gorges and steep slopes. From the hut to Oropedio there is also Kofto , a shorter but more difficult route.

Goritsia - Plateau of the Muses - summit

From 1100 meters it goes to 2700 meters to the “Plateau of the Muses”, where the huts Posos Apostolidis (2760 m) and Christos Kakkalos (2650 m) are located. The path leads through pine and beech forest up to 2000 meters to the Petrostruga square , where thunderstorms often approach. The path then continues through the forest and then onto alpine terrain. From the summit Skurta in 2450 m height up to the huts, the narrow passage leads Lämos and the dilapidated road Kangelia , and the way to Oropedio. This is a long stretch with no water occurrences with a large section in an alpine zone. From the hut of the “Plateau of the Muses” to the summit paths to Skolio and Sankt Anton, but also over the difficult gorges to Stefani and Mytikas, the path from Stefani to Zonaria leads through steep slopes and gorges.

From the “Plateau of the Muses”, the last section leads for about an hour through a steep section that requires climbing. From Skala to Mytikas easy climbing is possible without safety equipment, but on crumbling rock and in areas with very slippery rock. From Luki to Mytikas easy climbing without safety is possible, but also on crumbly rock with the risk of falling rocks. This route is preferred by groups. - From Luki to Stefani: Like from Luki to Mytikas, with the difference that the ascent ends shortly before the Stefani summit. Safety equipment is required on the last few meters.

Heinrich Barth climbed Mount Olympus for the first time in 1862, but did not reach the main summit of Mytikas. Christos Kakkalos , Frédéric Boissonas and Daniel Baud Bovy succeeded in doing this on August 2, 1913.

Mount Olympus with its national park was the motif of the Greek commemorative coin in 2005 . On the back the war of the titans was depicted. 25,000 copies were made and distributed with the annual set. The coins are not in circulation.