Schematic representation of dominance and notch height of a mountain in a topographic map (below) and a corresponding projection of the relief (above). The decisive criteria for the dominance and notch height of mountain "B" are shown in each case. The dominance of mountain “B” is the distance to the same high point (here 531 m) on the slope of higher mountain “A”, since mountain “C”, also higher than “B”, is further away. The perimeter around “B” defined by this distance is shown on the map with a dash-dotted line.

In geography, dominance is understood as the radius of the area that towers above a peak , mountain or other geomorphological landform . In addition to the notch height, dominance is the most important criterion for classifying a peak as an independent mountain.

The dominance of a mountain can be determined as the distance to the nearest point of the same height at the foot or slope of a higher mountain. It is given as a length. A mountain with dominance x  km is therefore  the highest elevation within a x km radius .

In order to determine the dominance of a mountain, one measures the minimum distance of the summit to the next contour line of the same height of a higher summit. If the mountain is very dominant, so that the curvature of the earth has to be taken into account, the distance can be calculated from the coordinates of the two points using an orthodrome .

The dominance should not be confused with the concept of orographic dominance developed by Eberhard Jurgalski , in which the height of a mountain is compared to its height. 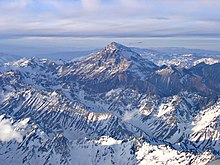 Aconcagua .
The mountain - after Mount Everest - with the greatest dominance