The Elbrus ( Russian Эльбрус Elbrus ; Karatschai-Balkar Минги тау Miñi taw [ mɪŋːi taw ]) is 5642  m height of the highest peak in the Caucasus , and is the highest mountain Russia . Whether it or Mont Blanc ( 4810  m ) is to be regarded as the highest mountain in Europe depends on the definition of the inner Eurasian border , for which there is no generally binding definition.

The mountain with double peaks (west summit 5642  m , east summit 5621  m ) is a dormant, heavily glaciated volcano , the last eruption of which took place 2000 years ago, but which is still classified as active. The distance between the two peaks is 1500 meters. The slightly lower eastern summit has a well-preserved crater about 250 meters in diameter. 22 glaciers flow from the Elbrus slopes into the valley and cover 145 km² with ice.

The current name Elbrus is probably derived from the Georgian word for "conical mountain" (Georgian იალბუზი Ialbusi ). The variants Elboros , Elborus and Elburus were also used until the beginning of the 20th century.

In ancient times the mountain was known as Strobilus , in mythology the prison of Prometheus after he brought fire to people.

According to a legend , Noah's Ark was briefly stranded here before landing on Mount Ararat . The Divs , Persian mythical creatures, are said to have been banished to Elbrus as punishment for their sins and have lived here ever since. Since it was seen as a holy mountain , climbing was considered taboo for a long time .

The mineral elbrusite , a representative of the garnet group , was named after the mountain Elbrus.

The question of its attribution to Asia or Europe is controversial. There is a view that the main ridge of the Greater Caucasus forms the inner Eurasian border, with which Elbrus, a little north of the ridge, would belong to Europe. The other view, which is particularly widespread in the German-speaking area, defines the border with Asia according to Philip Johan von Strahlberg (1676–1747). Strahlberg was commissioned by the Tsar's house to survey the land and moved the previously valid border of Europe from the Don River in a south-easterly direction to the Manytsch lowlands north of the Caucasus. According to this view, the Elbrus would be Asian. 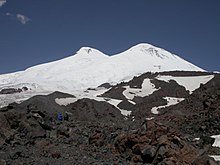 Double summit of Elbrus, seen from the summit station of the second section of the Elbrus cable car

South flank of the Elbrus, seen from the upper end of the Pastuchow rocks

On the summit of Elbrus

The Elbrus is an Andesitic - Dazitic stratovolcano , which formed during the Holocene in a 14 × 17 km diameter caldera . The last eruption took place about 2000 years ago (50 AD ± 50 years). Ignimbrites , ash deposits from explosive eruptions and lava flows are spread over an area of ​​250 km². A volcanic crater 250 meters in diameter has been preserved on the eastern summit. Today the Elbrus shows only very weak signs of volcanic activity, which manifests itself in solfataras near the peaks and in thermal springs . The potential danger of the Elbrus for its surroundings consists in the rapid melting of the massive ice cap and the formation of lahars when activity increases again.

The first ascent of the eastern summit took place on July 22, 1829 by the Karachay (perhaps also Kabardian ) shepherd and porter Kilar Chatschirow, who came from the camp of the Russian cavalry general Georgi Emmanuel (commander of the Russian Caucasus troops and head of the expedition) on the north side of the Elbrus climb to the summit. This ascent, however, has been questioned on several occasions. The camp was located about 15 kilometers northeast of the Elbrus summit on the bank of the Malka River. In addition to the military team (600 infantrymen, 350 Cossacks, among others equipped with two cannons), a scientific department for researching the Elbrus area under the direction of the German-Baltic physicist Emil Lenz was part of this expedition. He was accompanied by the German-Baltic mineralogist Adolph Theodor Kupffer , the Russian-German botanist Carl Anton von Meyer and the French zoologist Édouard Ménétries . For the first time, Carl Anton von Meyer provided height information on Elbrus and its surroundings.

The first ascent of the 5,642 m high western summit took place on July 26, 1874 by the Englishmen Frederick Gardiner, Florence Crauford Grove , Horace Walker and the Swiss leader of the expedition, Peter Knubel from St. Niklaus in the canton of Valais . The first of today's usual ski touring ascents apparently took place in the summer of 1914 on the eve of the outbreak of the First World War by Carl Egger and Guido Miescher, who as Swiss, despite the Russian mobilization, were still allowed to travel home unmolested, but on an adventurous detour.

The Elbrus in World War II

German mountain troops of the 1st and 4th Mountain Divisions crossed the 4000 m high Khotiutau pass on August 14, 1942 and took the surprised Red Army crew of the Elbrushütte by surprise, which withdrew without a fight.

On the orders of Major General Hubert Lanz , commander of the 1st Mountain Division, a group of mountain troops under Captain Gämmerle climbed the western summit despite the bad weather and hoisted the Reich war flag there , which, however, did not withstand the prevailing snowstorm for long. In better weather, a second ascent was made on August 23 by a group of eight under the leadership of Lieutenant Leupold. Originally, Major General Lanz had planned to rename the mountain after the successful conquest by the mountain troops " Adolf Hitler Peak". The news of the ascent of Elbrus is said to have caused an outburst of rage in Hitler; According to Albert Speer's memoirs , he railed against the "idiotic ambition, an idiotic peaks to climb," instead of all forces command default on the capture of Sukhumi to focus on the Black Sea. After this negative reaction, the name was not changed.

The climb to the highest peak in the Caucasus was nevertheless exploited for propaganda purposes. The well-known scenes that could be seen in the newsreel , however, were only filmed afterwards, as the recordings of the first ascent were found to be unusable. The re-shoot took place on September 7th in the presence of the mountaineer and cameraman Hans Ertl .

On September 27, 1942, there was a high mountain battle between German and Soviet mountain troops on the Elbrus.

The Elbrushütte remained under German occupation until the beginning of January 1943. Legends arose on the Soviet side about their reconquest, including a successful bombing - but in fact only the fuel depot below the hut was hit. Due to bad weather conditions, it was initially not possible for the Red Army to remove the Imperial War flag from the summit of Elbrus after the Wehrmacht had withdrawn ; Only in February did a Soviet mountaineering unit succeed in doing this.

Not much later this hut was temporarily converted into a high mountain barracks. This hut was occupied by German mountain troops in August 1942 (see previous section), and from here they climbed the summit with a Russian guide.

On August 16, 1998, this hut fell victim to a fire and burned down completely. The cause is not fully understood. Apparently, in a canister believed to be filled with water, the contents of which were being heated on the stove, was mistakenly gasoline. In the summer of 2001, the new "diesel hut" was opened a few meters below the ruins of Prijut 11 (so called because it is located in place of the former diesel generator station).

A bivouac box erected in the saddle between the two peaks in 1933 collapsed just a few years later (although remains of this hut are still visible today). 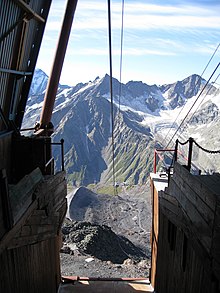 Furthermore, at the end of the short chairlift or the new third section of the cable car, there is a collection of white-blue-red (i.e. in the colors of the Russian flag) painted accommodation for six people in the form of lying steel cylinders (hence in Russian called botschki , barrels ) , which are used today by many aspirants to the summit for acclimatization and as a base for the ascent. In addition to the "barrels", various containers are available as accommodation between approximately 3800 m and 4200 m.

The Elbrus cable car leads from the Poljana Asau valley station (“Asau clearing”) at an altitude of 2,300 m at the foot of the Elbrus in three sections to a ski area at an altitude of over 3,500 m. The Elbrus cable car has a total length of around 5300 meters. Of these, the first section, opened in 1969 between Poljana Asau and Stary Krugosor (“Old Panoramic View ”) is 1860 meters long and the second section from Stary Krugosor to Mir (“Peace”) , opened in 1976, is 1760 meters long. A third section, which was planned at this time and already planned for the top station of the second section, was initially not built, but was replaced by an approximately 1000 m long chairlift at the end of the 1970s .

In addition to this old cable car, there has been a new cable car since December 2006, which initially reached from the valley station in Asau to the middle station of the Elbrus cable car and meets today's standards in terms of safety and comfort. The second section up to the Mir station has been in operation since August 2009. The third, 1675 m long section leads from the 3455 m high Mir station to the Gara-Baschi station at 3847 m above sea level.

Furthermore, it is customary to transport aspirants to the summit with the snowcat for a fee of around 50 euros up to the Pastuchow rocks.

The Elbrus is located in a national park, the Prielbrussje National Park . Around 350,000 tourists visit the mountain annually, around one in twenty with the aim of climbing the summit.

Because of the comparatively good infrastructure, the mountain is considered to be relatively easy to climb. From a technical point of view, the ascent isn't too difficult. The Elbrus, however, places higher demands on physical fitness than, for example, the comparably high Kibo . Around 15 to 30 climbers die on Elbrus every year. Most of them are poorly prepared and equipped, without a mountain guide and do not take the time to get used to the mountain air. Because the winters on Elbrus are extremely cold, the mountain is usually only climbed between May and September.