From the point of view of the Abkhazian government and Russia, Sukhumi is the capital of the Republic of Abkhazia, which is internationally recognized by only a few states, de jure it is still seen by the majority of the UN member states as the capital of the Autonomous Republic of Abkhazia within Georgia . However, Georgia has not exercised any sovereignty over Abkhazia since 1993.

The city is located in the middle of Abkhazia, directly on the Black Sea . It is an important port, a railway junction and, thanks to its mild climate, an important health resort and tourist destination. Their sulfur baths were already used in Roman times.

In the 6th century BC Chr. , In the field of contemporary Sukhumi the Greek colony Dioscurias (Dioscurias) founded. Legend has it that the twins Castor and Pollux laid the foundation stone. During the Roman and Byzantine empires, the city was known as Sebastopolis . 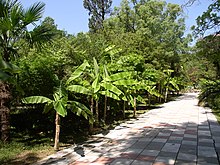 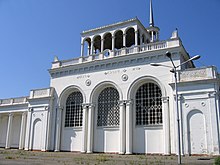 The city in the 19th century, then Sukhum-Kalé (painting by Pyotr Vereschtschagin )

Under Ottoman rule it was called Sukhum -Kalé , also Soghum Kala, and was expanded into a fortress. In the 19th century Sukhumi changed hands several times. In 1810 the city fell to Russia , but was only ceded by Turkey in the Peace of Adrianople in 1829 , received magazines and a bazaar. In 1854, when an Anglo-French flotilla approached, it was hastily evacuated by the Russians, partly destroyed and plundered by Abkhazians who planted the Turkish flag. In September 1855, Omer Pasha landed with an Ottoman corps and began operations against Tbilisi from there . In May 1877 the city was occupied again by the Ottoman Empire , but in September it was cleared again and burned down by the Abkhazians. In 1879 the city had 1,947 inhabitants. 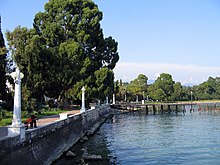 In May 1918 a Bolshevik republic was proclaimed in Sukhumi. The attempt failed, however, the city then briefly became part of the Democratic Republic of Georgia , seat of a Georgian governor general and the Abkhaz People's Council.

On March 4, 1921, it was captured by the 9th Army of the Red Workers 'and Peasants' Army under the command of W. Ch. Ter. Shortly thereafter it became the capital of the newly founded Abkhazian Socialist Soviet Republic , an independent Soviet republic.

In the Soviet Union , the place developed into a white city by the sea , a summer paradise with exclusive hotels, cafes, beaches and a lively artist scene. The city was multicultural, the population consisted of Abkhazians , Georgians , Russians , Armenians , Ukrainians and a Greek minority . In 1932 the Pedagogical Institute was founded, from which a university later developed. At the same time, the city housed institutes of the Soviet Academy of Sciences , including the famous monkey breeding station, and from July 1945 the Physical and Mathematical Institute founded by the NKVD , where Manfred von Ardenne researched the development of the Soviet atomic bomb until 1954 . In 1968 the trolleybus network was opened in the city. In Sukhumi there was also a prisoner of war camp 461 for German prisoners of war of the Second World War . By 1989 the population rose to almost 120,000. 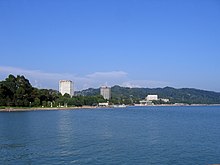 View of the city from the Black Sea

Shopping street in the center

Cathedral of the Annunciation

From 1992 to 1994, the city therefore became the center of the guerrilla struggle between the Georgian military and Russian and, in some cases, Chechen militants . The civil war, which cost many lives on both sides, ended with the secession of Abkhazia from Georgia and the de facto independence of the region. After Sochumi was captured by the irregulars on September 27, 1993, the Sukhumi massacre of the Georgian civilian population took place. Thousands of Georgians were murdered, and most of the survivors were driven from the city. Members of the Abkhazian government installed by Georgia were also killed, including politicians Shiuli Sharpava , Raul Eschba and Guram Gabiskiria . The share of Georgians in the city population was only about 3% in 2011.

One of those responsible for the war crimes against the civilian population in Sukhumi was the Chechen terrorist Shamil Basayev , who at the time was in command of a Chechen unit operating on the side of the Abkhaz separatists. Many Greek and Jewish residents also fled abroad due to the fighting and the associated destruction.

The city has been the capital of the Republic of Abkhazia since de facto independence.

Sukhumi largely lost its status as a formerly important business and science location as a result of the war, and tourism also came to a complete standstill in the meantime. After the civil war, the beach promenade looked like a landscape of ruins, and some rusty ships are still lying in the harbor. Due to the now desperate economic situation, thousands of residents left the city in the following years. The population fell between 1989 and 2003 from 120,000 to just over 40,000.

In the last few years the situation of the city, as well as the whole region, has improved again, especially due to strong investments from Russia and a slowly reviving tourism. The population is now back to around 64,500, which is a massive increase compared to 2003. As a result of the Caucasus War in 2008 , Russia and later several other states recognized the independence of Abkhazia, which further favored the region's economic recovery. Since then there are also several embassies in the city.

The Machajirenuferstrasse was named after the Abkhazians who emigrated to the Ottoman Empire , the Machajirs . The old Sukhumi fortress lies on it. It was built by the Romans at the beginning of the 2nd century AD, later destroyed and rebuilt several times. The fortress wall facing the water has fallen into the sea over the years. In 1724 the Turks built their Sohumkale Castle on the ruins of the fortress . At the end of the 18th century it became the residence of the Abkhazian prince Kelesch Achmed-bei Scherwaschidze , who was murdered by Turkophile conspirators on May 2, 1808. His grave is next to the fortress, which the Russians moved into shortly afterwards. In 1877 and 1878, at the time of the Russo-Ottoman War , it was used by them as a prison for political opponents.

The remaining part of Machajirenuferstrasse was built around the turn of the 19th and 20th centuries. The hotels, restaurants and cafés reflect the individual architectural tastes of their respective builders.

The botanical garden in Sukhumi, opened in 1840, is one of the oldest such gardens in the Caucasus. It is around 30 hectares and is home to a variety of different plant species.

The Friedensprospekt (Prospect Mira) is an important shopping and promenade in the city.

In the eastern part of the city is the well-preserved castle of the Abkhazian king Bagrat III. from the Georgian Bagratid dynasty who ruled Abkhazia from 978 to 1014 - the time when the kingdom achieved its greatest prosperity. The castle walls are 1.80 meters wide.

More precise statistics about the exact population numbers and proportions of the entire Abkhazia region have only been available since the second half of the 19th century.

In 1886 a Russian census for the city of Sukhumi itself showed only 412 permanent residents, of which 28.9% Russians , 27.9% Georgians and Mingrelians , 22.6% Greeks , 12.9% Armenians and only 0.1% Abkhazians . In the outskirts of the city, the then Suchumski okrug , the Abkhazians were clearly in the majority with a population of almost 86%.

The state Tschanba Theater was built in 1912 as a private theater. At that time, the merchant Aloisi built a whole complex of cultural and leisure facilities with his grand hotel (for example, in addition to the actual hotel and the theater, a cinema, a casino and a roller skating rink). In 1921 this was nationalized. The hotel was named Bsyp after a river in western Abkhazia, and the theater was declared the first state theater in Abkhazia. Both buildings burned down in 1942 and were rebuilt in 1952. The theater now has 700 seats. The pieces are usually performed in the Abkhaz language. A system specially installed for this purpose allows the text to be translated synchronously and transmitted to headphones, which are given to visitors who do not speak Abkhazian. Pieces from the international repertoire such as Shakespeare as well as pieces by Russian or Abkhaz authors such as Nikolai Erdman or Fasil Iskander are played . Today the theater bears the name of the Abkhazian writer and politician Samson Tschanba (1886–1937), who wrote the first drama in the Abkhaz language. 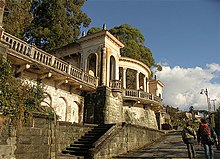 Parks in the city

Sukhumi is located in the center of the main traffic corridor of Abkhazia, which runs along the Black Sea coast, on the Georgian highway S1 and on the main route of the Abkhazian railway . Passenger traffic exists only in a north-westerly direction to Russia. Local trains run to the Russian Adler , a district of Sochi . There is also a through car connection to Moscow . The city's airport is still closed as a result of the destruction during the war. The Sukhumi trolleybus , today the only trolleybus operator in Abkhazia and Georgia , also operates in the city .

In recent years, Russia has made major investments in Abkhazia, particularly in Sukhumi. Tourism experienced a revival and is gaining importance again. Since 1979 the city has also hosted the Abkhaz State University , the only university in Abkhazia. During the Soviet era, the “ Physikalisch-Mathematisches Institut Sukhum ” was located in the city , where the Soviet atomic bomb project was significantly developed. Today the city is still the economic center of Abkhazia. Tourism is one of the most important branches of the economy, along with numerous government agencies and ministries as well as the state press agency Apsnypress . The private companies Abasa TV , Aquafon and A-Mobile, among others, are based in Sukhumi. 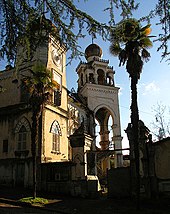 Villas in the city

The most successful sports club in the city is the football club Nart Suchum , founded in 1997 , with eight titles Abkhazian record champions . Also important is the Dinamo Suchum club , which was founded in 1927 and was the most successful Abkhazian football club during the Soviet era and most recently played in the Soviet Second League . Dinamo Suchum had withdrawn from professional gaming in the late 1990s and was revived as a club in 2010.

Administrative division of the Republic of Abkhazia