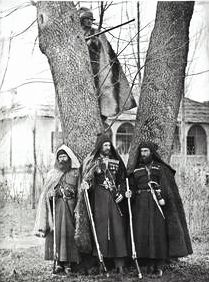 The Mingrelians ( Mingrelisch მარგალი / Margali ; Georgian მეგრელები / megrelebi ) are a Subethnie the Georgian . They live in the historical region of Mingrelia , Odishi and Guria in western Georgia and southeast Abkhazia . The Georgian region names Mingrelia and Upper Svaneti still refer to this people today. There are between 400,000 and 500,000 Mingrelians worldwide, but some estimates assume an even higher number.

Spread of the Mingrelian language

In 1926 there were 242,990 Mingrelians in the Soviet Union . Today sources give a number of 215,000 to 750,000 Mingrelians in Georgia, although verification is difficult because they have been counted among the Georgians since 1930. In the Abkhazian province of Gali , the Georgians form the majority of the population, despite refugee movements in the conflicts since Georgia's independence from the Soviet Union. Most of them are Mingrelians. Here with the Gali appears the world's only newspaper in the Mingrelian language.

The regions of Georgia

According to the Argonauts legend , the land of Colchis is said to have been located on the Black Sea coast of today's settlement area of ​​the Mingrelians. The Mingrelia region and the Kolchian kingdom are historically connected. Many Lasen and Mingrelians see their ancestors in the common history of the Colchis, and thus also the Egrisi (Lasika).

At the end of the 11th century the region came under the rule of the rising Georgian kingdom. After the second Mongol storm under Timur Lenk in 1386, Georgia disintegrated and Mingrelia became an autonomous principality from the 16th to 19th centuries until it became part of the Russian Empire . After the October Revolution , Mingrelia became independent from Russia on May 26, 1918 as part of the Democratic Republic of Georgia . Since 1921 it belonged to Soviet Russia and from 1922 to the Soviet Union .

On April 9, 1991, Georgia declared itself independent again. Civil wars broke out in Abkhazia. Georgia's first president, Swiad Gamsachurdia , a Mingrelian, was replaced by a coup in 1992. His successor was the former Georgian Communist Party leader and Soviet Foreign Minister Eduard Shevardnadze . But Gamsakhurdia's supporters caused unrest in Abkhazia - and when freight trains were attacked, the Georgian government sent troops, which in turn led to resistance from the Abkhazians. In 1993, Georgia's troops suffered a severe defeat against the Abkhazian separatists, whereupon Shevardnadze called the Mingrelians “traitors to the nation” because of their support for the Abkhazian separatists. Gamsakhurdia used the situation to return from exile at the end of the year and brought a large part of western Georgia under his control with his supporters until he was cornered by the government troops with Russian help. Gamsakhurdia died under unknown circumstances. The rebellion collapsed. With the 2008 Caucasus War , Georgia lost all control over breakaway Abkhazia. The de facto regime there has been recognized by Russia and some other countries as an independent state, while most other states continue to see Abkhazia as a province of Georgia. The Mingrelian settlement area now extends on both sides of the border between Georgia and Abkhazia.