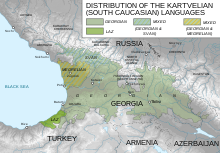 Lasian and Mingrelian are more closely related to each other, so some also summarize them as dialects of the so-called Sanian or Colchian language , which is associated with the ancient kingdom of Colchis .

Georgian and Judeo-Georgian are the only written languages ​​in the group. Georgian has been written in its own alphabet, the Mchedruli , since the 3rd century . The Hebrew alphabet is used for Judeo-Georgian . These two languages ​​are also the only two mutually understandable languages.