Collapse of the Soviet Union 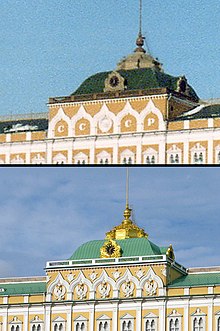 On December 8, 1991, the presidents of Russia , Ukraine and Belarus - Boris Yeltsin , Leonid Kravchuk and Stanislau Shushkevich - signed the so-called Treaty of Minsk and the Beloveshskaya Pushscha agreements in the Beloveshskaya National Park , whereupon Shushkevich telephoned Soviet President Gorbachev to sign the agreement announced. These agreements recorded the official dissolution of the Soviet Union, the 1922 Treaty establishing the USSR was repealed and the Commonwealth of Independent States was established, which was confirmed on December 21, 1991 with the Alma-Ata Declaration (1991) . The dissolution of the world's largest socialist state also marked the end of the Cold War .

In the second half of the 1980s it became increasingly clear that the Soviet intervention in Afghanistan was a fiasco. The nuclear disaster at the Chernobyl nuclear power plant on April 26, 1986, caused by serious violations of applicable safety regulations and the design-related disadvantages of the reactor design , became a symbol of the failure of the communist system. Instead of informing the citizens and states of Europe, the Soviet government ordered that the extent of the reactor explosion be kept secret. In addition, the economic crisis worsened and there were increasing shortages in the supply of the population. Because a planned economy , strict command structures, excessive military spending, mismanagement and environmental pollution caused a slow economic decline in the Soviet Union.

Gorbachev's concepts of perestroika (“transformation”) and glasnost (“openness”) first became publicly perceptible when he lifted the banishment of Nobel Peace Prize laureate Andrei Sakharov and his wife Jelena Bonner in December 1986 . The revitalized freedom of expression in these years was initially directed against Stalinism and led to a reassessment of Stalin in the history of the Soviet Union .

In addition to domestic protest movements and economic problems in the Eastern Bloc , the previous isolation of Eastern Europe by the Iron Curtain from individual countries, beginning with Hungary , was partially relaxed and later lifted. The dismantling of the border fortifications, the pan-European picnic that led to the opening of the Iron Curtain , the resulting movement of refugees via embassies to the West and the later abandonment of border controls resulted in an uncontrolled mass exodus of GDR citizens. As a result, state powers eroded across Eastern Europe.

On October 25, 1989, on a state visit to Helsinki , General Secretary Mikhail Gorbachev proclaimed the so-called Sinatra Doctrine , which allowed the Warsaw Pact states to regulate their internal affairs sovereignly and independently. On November 9, 1989 , the Berlin Wall fell ; In December 1989 there was a change of government in Czechoslovakia as a result of the so-called Velvet Revolution . In the autumn and winter of 1989, the communist leaderships in all Eastern Bloc states (except the Soviet Union ) lost their monopoly of power, so that the real socialist alliance of states fell apart. These revolutions in the states of the Eastern Bloc contributed significantly to the process of disintegration in the Soviet Union. From March 1990 until the collapse in December 1991, a total of 21 states declared their independence.

In the first and only referendum in the history of the Soviet Union on March 17, 1991, 76% of voters in nine participating Union republics voted for the continued existence of a reformed Union.

Areas that are only partially recognized as states are in italics .

Before the August coup

The provisional declarations of independence for Estonia and Latvia finally came into force during the August coup on August 20 and 21, 1991, respectively. As the only former Soviet republic, Russia has not made a declaration of independence, but has claimed to be the legal successor to the Soviet Union.

After the August coup

After the dissolution of the Soviet Union and the collapse of the planned economy at the end of the 1980s, overall economic production in Russia declined year after year from 1990 to 1996. During this period the gross domestic product (GDP) in Russia decreased by about 40% and then increased annually from 1999 onwards between 5 and 10%. In 2010, according to the statistics office, Russian industrial production was only 83.8 percent of the 1991 level - in vehicle construction, emissions were only 49.6 percent.

In Kyrgyzstan , conservative estimates suggest that poverty would rise to over 75% in 1993, while GDP fell by 21%. In 1997, 50% of the Kyrgyz population still lived in poverty.

In Cuba , the collapse of the Soviet Union triggered an economic crisis known as the special period .

The life expectancy in Russia declined between 1991 and 1994 from 69 to less than 64 years; a few years more people died than were born again . The health of men in particular deteriorated - in the mid-1990s they could only expect an average lifespan of 58 years. At the beginning of the 21st century, life expectancy of 62.8 years was still lower than in Bangladesh .

"It was clear to many that the USSR had already disintegrated after the attempted coup in August 1991, but they were afraid to speak out."

In his State of the Union address in April 2005, Russian President Vladimir Putin described the collapse of the Soviet Union in 1991 as “the greatest geopolitical catastrophe” of the 20th century. According to Kirill Rogow, the word “geopolitical” should be taken into account, which imposes the foreign policy clichés of the Soviet era on modern Russia. It is true that the nostalgia for the loss of the Soviet Union in the 1990s had risen continuously in the population of Russia to a peak of 70 percent at the beginning of the 2000s; however, this proportion fell from the mid-2000s and reached below 50% in 2011/12. The opposite was true of the political discourse of the Putin era: the topic of the “collapse of the Soviet Union” had gained in importance and was part of the narrative of a domestic political threat. Such a threat, whether real or imaginary, determines the priorities of the political agenda: civil elements take a back seat in favor of a “mobilization agenda”, a struggle to maintain the status quo.

Literature not yet incorporated: