Car wreck (" VW Beetle ") on the bottom of the Walchensee

Leaked car battery on the edge of a forest 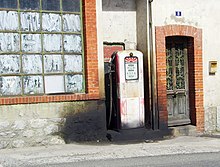 Leaking gas pump in the south of France 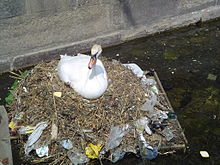 Ducklings and plastic bag on a river bank

Under pollution is generally the pollution of the environment by the action and the presence of people, or understood even by artificial unnatural concentrations of animals by people. The focus is on the environmental impact of waste and emissions .

This includes exhaust gases , sewage , different types of waste ( disposed of in solid form or in containers), in particular toxic pollutants and possibly also microorganisms and non-material emissions such as radiation, but also noise and light pollution . They arise predominantly during the production or consumption of products as unwanted by-products or after consumption or use has ended when the product itself becomes superfluous and must be disposed of or released. The most important types of environmental pollution are water pollution , air pollution and soil pollution (see also contaminated sites and soil degradation ) as well as pollution of land areas and water bodies by garbage ( littering ).

The consequences of environmental pollution have been known since the beginning of industrialization , when plant damage was observed in the immediate vicinity of factories or black snow in winter. The general public became aware of the effects of environmental pollution at the beginning of the 1970s with the occurrence of forest damage , coral bleaching , the discussion about acid rain and the anti-nuclear movement .

With the use of fire by humans, human-made environmental pollution occurred for the first time - albeit in a localized manner. The emissions and combustion residues caused by the fire have in no way resulted in a demonstrable pollution of the environment, since plants use the carbon dioxide emissions to carry out photosynthesis.

With the beginning of agriculture , humans created monocultures and thus changed ecosystems . These changes were still partially reversible (reversible): As soon as a cultivated area was no longer used, the natural vegetation was able to repopulate the damaged soil. In some regions of the world, however, the soil has been so overused that plants can only grow there with difficulty.

The beginning of civilization ( urban development ) led to irreversible environmental changes. The cutting down of large forests in the Mediterranean region for the production of construction and firewood as well as for agriculture (see deforestation in Roman times ) is a striking example of the permanent change in an ecosystem. The extraction of metals by smelting ores is a historically early example of man-made pollution.

As early as the 17th and 18th centuries there was soil and water pollution associated with certain trades. In places in Holland , for example in today's Zaanstad , where lead-containing dyes were produced in this epoch , there are now still increased concentrations of lead in the soil, so that in some cases it can be classified as too heavily contaminated with it according to modern regulations. The production of Tran was anything but environmentally friendly. The tanning trade , in which urine was needed for leather processing, even in the Middle Ages meant that in many cities it was only allowed to be practiced in certain streets or districts because of the stench. This also applied later (including in Morocco to this day) for the dyeing of wool or certain textiles. For this purpose, an artificial branching off of a body of water was created quasi as waste water (e.g. the breeding in Goslar ). For the same reason, it was also forbidden to raise pigs within the cities . The often attested relocation of the blacksmiths of a medieval town to its own blacksmith streets or alleys was probably not only related to the great fire risk of this craft, but also to the resulting air and soil pollution.

Environmental damage in the direct vicinity of factories increased with the start of the industrial revolution . The exhaust gases ( smoke gases ), which often contain sulfur , sometimes led to severe damage and even to the death of the adjacent vegetation . Liquid waste was also often simply discharged into the surface waters or this seeped into the ground.

Some projections of the temperature development up to 2100

The 20th century is marked by the emergence of global environmental problems. Because of the ozone hole , CFC trading was banned. The global warming is due to rising emissions of greenhouse gases caused. Long-lived organic pollutants , the so-called POPs, spread through certain long-distance transport mechanisms worldwide and are detected far away from their areas of application. The enrichment ( accumulation ) of pollutants in the environment or in living beings can cause further damage (see also discussion about the use of DDT ). Accidents in nuclear power plants, for example the Chernobyl disaster or nuclear weapons of mass destruction, can also have global effects .

Plastic litter in the oceans is in part caused by ship crews dumping litter into the sea or rubbish that is washed into the ocean from rivers. This rubbish consists of plastic bags , packaging , disposable razors, tubes of cream, plastic bottles, and more, and doesn't dissolve over the years. It breaks down into smaller and smaller parts due to the friction of the waves. The smaller the garbage, the more dangerous it becomes for the environment. Animals like whales, fish and birds or turtles eat the garbage and die from it.

The environment can be polluted by many substances, for example by

The pollution can spread over long distances by wind, water and other mechanisms and thus be detected in places where the harmful substances have never been used. The long-distance transport of pollutants is the product of numerous environmental and substance-specific transport and mobilization processes. Important processes are long-distance atmospheric transport and water transport via ocean currents and rivers.

Whether a pollutant is mainly transported by air or water to regions remote from the source depends, among other things, on its volatility and its solubility in water. In addition, the environmental conditions (e.g. air temperature, humidity and amount of precipitation) in the source area are of course important parameters that determine whether long-distance transport is possible.

The ten most polluted cities or areas

In 2006, 2007 and 2013 the American Blacksmith Institute published a list of the cities and areas most heavily polluted, describing the most important polluting substances and the causes and, if any, countermeasures. All previously "nominated" locations can be located on the map in the main article.

There are also areas with high concentrations of pollutants that humans are innocent of. For example, the groundwater in various countries contains excessive concentrations of arsenic compounds or heavy metals, without human activities being to blame. Natural pollution can also occur in the vicinity of volcanoes or in areas where ore deposits are weathered.