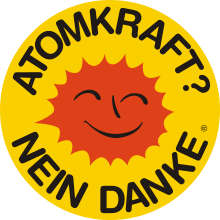 The laughing sun of the anti-nuclear movement is used in many countries around the world.

Anti-nuclear power movement describes worldwide social movements and civil society engagements that are in favor of phasing out nuclear power and against the use of nuclear energy .

According to Joachim Radkau , the euphoria of the atomic age that prevailed in the 1950s was primarily in journalism, while it was not shared among the general public. The anti-nuclear protest movement therefore had to assert itself against the media until the 1970s. a. with the occupation of the construction site for a planned nuclear power plant in Wyhl and the focus on the risks of nuclear energy, news value. Thereupon the general mood in the public changed, the public became a critical force, which with the establishment of the party The Greens did not remain purely extra-parliamentary. For the first time ever in history, technology policy was debated in parliament for years.

According to Radkau, the anti-nuclear movement in Germany was a rational response to concerns that arose from a combination of many observations and information. He refers to the theses of a standard work on reactor technology from the 1950s, which later could only be found in anti-nuclear literature. The initial exaggerated nuclear euphoria of the time before was openly addressed at the time, as was the high risk associated with nuclear energy. Radkau attributes the success of the environmental and anti-nuclear movement in Germany and the USA to their low recognition in Japan (cf. Michiko Ishimure ) less to technical than to social causes.

The dynamism of the German and American environmental movement emerged in 1970 from the interplay between administrative elites, initiatives from science and the media. It was based on a broad base of strengthening citizens, parliaments and institutions and an elite that was relatively open to newcomers.

Successes of the anti-nuclear movement at the regional level, such as preventing the planned reactor block in Wyhl in southern Baden , were much easier to achieve in Germany than in centralized France.

The protest movement was particularly effective because both the economic viability of nuclear energy was significantly less favorable and because the need for nuclear power was lower than many previously believed.

In France, the anti-nuclear movement reached its peak in the 1970s. The first demonstration against a nuclear power plant took place on April 12, 1971 in Fessenheim , Alsace . Until the middle of the decade, opponents of nuclear power from Germany, France and Switzerland allied to demonstrate against power plants near Fessenheim, Wyhl and Kaiseraugst . Massive resistance also formed around the fast breeder Superphénix . During a demonstration in Malville with 60,000 participants on July 31, 1977, there were significant riots in which one protester was killed. The Sortir du nucléaire network was created in 1997 in connection with the closure of the Superphénix.

Unlike in Germany, the anti-nuclear movement in France did not succeed in bringing about a broad social consensus against nuclear power. It could therefore not prevent nuclear power in France from being systematically developed into the country's most important source of electricity since the 1970s and today it accounts for over three quarters of French electricity production.

After massive protests by the population in the 1970s, the planning for the Carnsore Point nuclear power station in County Wexford , which had already been quite advanced since 1986, and thus for the establishment of national nuclear power generation, was abandoned; this is considered a milestone for the rise of the anti-nuclear movement worldwide. 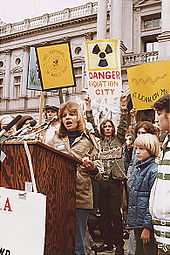 Demonstration in Harrisburg (USA) on September 4, 1979

The anti-nuclear movement in the United States (USA) is part of a protest movement made up of around 80 groups that initially opposed the manufacture and use of nuclear weapons. This group has a long tradition of opposition to the military use of nuclear power. The movement peaked in the 1970s and 1980s, among other things triggered by the accident at the Three Mile Island nuclear power plant , south of Harrisburg, Pennsylvania in March 1979. On June 12, 1982, around one million people demonstrated in Central Park, New York against nuclear armament.

Some of the most internationally known personalities in the movement include John Gofman , Amory Lovins and Linus Pauling .

From March 2012 there were protests against the Kudankulam nuclear power plant . The first public hearing on the nuclear program took place in August, while demonstrations increased, with around 25,000 people eventually gathering on the south coast. This delayed the expansion considerably, so that no further progress was discernible at the beginning of 2015.

In Japan, after the triple catastrophe with earthquakes, tsunami and the subsequent triple meltdown at the Fukushima Daiichi nuclear power plant, a broad anti-nuclear movement has established itself. In the summer of 2012, up to 200,000 people took part in regular demonstrations in front of the official seat of the Japanese Prime Minister in Tokyo to protest against the planned restart of the Ôi nuclear power plant. Even after the decline in the number of participants, there are still regular protests in Tokyo and all over the country against the restart or the planned construction of new nuclear power plants. Current Japanese research on the subject of the post-“Fukushima” protests also shows that many of the activists, journalists or scientists who are active against nuclear power today have been active for decades, largely unnoticed by the mainstream media in Japan, but also abroad, and largely ignored by scientific research. At the universities of Leipzig and Frankfurt / Main, intensive research work on nuclear power problems from different perspectives began in 2011. In addition to the website of the “Fukushima Text Initiative”, several publications provide information on research activities.

The nuclear weapons tests , the uranium mining and export as well as incidents in the use of nuclear energy were the subject of public debate in Australia . The movement's roots also lie in the dispute over the French nuclear weapons tests in the Pacific . To this day, Australia only operates nuclear reactors for research purposes and has so far not built any nuclear weapons. Australia has significant uranium deposits. The last failed attempt to build a nuclear power plant - the Jervis Bay Nuclear Power Plant - was in 1970. Julia Gillard's ruling Australian Labor Party (ALP) was against the construction of nuclear weapons and in favor of the construction of a fourth uranium mine, which the 2009 ALP National Conference decided on.