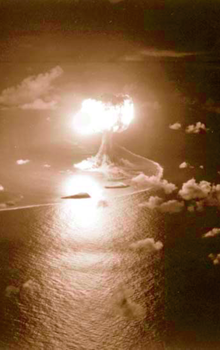 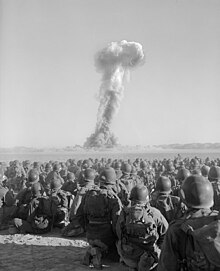 Above-ground nuclear weapon test with soldiers during " Operation Buster-Jangle " in the US state of Nevada, 1951 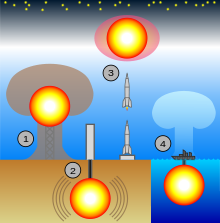 Course of a nuclear weapon explosion 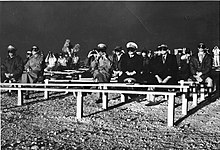 Above-ground nuclear weapon test with soldiers in the US state of Nevada during " Operation Tumbler-Snapper ", 1952

Almost 2100 nuclear weapons tests were carried out worldwide, some of them above ground in the atmosphere. It is believed that the radioactivity released in these tests resulted in approximately 300,000 deaths worldwide .

For safety reasons ( danger from the pressure wave and especially from the radioactive fallout) , nuclear weapons tests can only take place in large-scale cordoned off military test areas, such as the Nevada Test Site (NTS) in Nevada (over 1000 tests). Various remote islands or atolls as well as unpopulated desert areas were also used for test purposes:

There were also numerous tests in populated areas:

The radioactive fallout not only fell on the test areas, it was also spread around the world: the nuclear weapons tests of the 20th century measurably increased radiation exposure worldwide, and many individual tests can even be traced in today's measurement data. Nuclear weapons tests were also carried out underwater, in the high atmosphere and in space ( Starfish Prime ). For this purpose, some rockets were launched from Johnston Atoll between 1958 and 1962 .

In the case of underground nuclear weapons tests, the risk of radioactive material escaping is relatively low, but it is always present, especially in the case of porous rock. In December 1970, for example, the Baneberry nuclear test in the context of Operation Emery on the NTS resulted in a significant release of radioactive material, which even led to a six-month moratorium on all US nuclear tests . To carry out an underground nuclear weapon test, the explosive device is lowered into a borehole together with measuring equipment, which is then sealed with concrete . Depending on the objective of the respective test, the depth of such a hole can vary from just a few tens of meters to over 1,400 meters. In contrast to an above-ground nuclear weapon explosion with its spectacular mushroom cloud , mostly only one earthquake can be felt from an underground one. The seismic events are recorded and analyzed by the more than 300 seismological measuring stations of the International Monitoring System IMS worldwide .

During atomic bomb tests, numerous measurements of the effectiveness and effects of the weapon being tested are carried out. Buildings, vehicles and animals were often placed in aboveground tests in order to be able to study the effects of the explosion in detail. Military equipment, weapons, trenches and soldiers (supposedly at a safe distance) were also included in the tests. High-speed cameras were also used to take photos of the explosion and physical measurements by examining the various types of radiation produced by a nuclear weapon explosion . For this purpose, the nuclear weapon had to be partially at a defined point at the time of ignition, so that it was not possible to drop it from an aircraft. Therefore, the nuclear weapon was mounted on a bomb tower , brought into position with a tethered balloon or set up in a barrack on the ground. Research rockets to investigate the mushroom cloud and the high atmosphere were also launched during numerous above-ground nuclear weapons tests. The numerous above-ground tests resulted in the so-called nuclear weapon effect , which influences the age determination in radiocarbon dating .

In addition to measurements of functionality and effects, nuclear weapons tests are also used for propaganda . During the Cold War in particular , the warring nations tried to show their opponents their atomic potential in a terrifying way. The United States in particular wanted to convince the public of the need for these weapons.

Number of nuclear tests worldwide by year and country

The first atomic bomb test took place on 16 July 1945, the grounds of the White Sands Missile Range near the town of Alamogordo ( New Mexico , USA) under the name Trinity test (dt. Trinity ) instead. Here one was implosion like the Fat-Man - nuclear weapon , which later on Nagasaki was dropped ignited as these a more complicated ignition required than the uranium bomb. You wanted to be sure that this construction principle worked. In contrast, the first uranium bomb, called Little Boy , was detonated directly when the atomic bomb was dropped on Hiroshima on August 6, 1945 without a prior test .

In July 1946, two nuclear weapons tests took place on Bikini Atoll ( Operation Crossroads ); around 42,000 people were involved. After two successful tests, Charlie's third attempt, originally planned for spring 1947, was not carried out . The first Soviet atomic bomb test took place on August 29, 1949 in Semipalatinsk (now Kazakhstan); the explosive force was 22 kilotons. So far around 2000 nuclear weapons tests have been carried out worldwide (1030 of them by the USA, 715 by the Soviet Union), with an explosive force of around 34,000 Hiroshima bombs being released.

The first underground test took place on November 29, 1951 ("Uncle" test from the Operation Buster-Jangle series , Nevada Test Site), but a total of 622 nuclear explosions were carried out in the atmosphere. Due to the radioactive fallout caused by these tests, there were and still are high rates of cancer and malformations in the vicinity of these areas among the population living there . The radiation exposure is higher worldwide than before the first nuclear weapons tests. And European soil and water contain - in addition to the Chernobyl - Fallout - still Residue nuclides of these above-ground tests.

From mid-1958 to mid-1961 there was a moratorium initiated by Khrushchev. There were no nuclear tests by Britain and the United States during this period.

The rapid increase in radiation exposure led in 1963 (after the previous year, with around 180 tests, the highest annual number by far) to the fact that the warring world powers, the USA and Great Britain on the one hand and the USSR on the other, ban the treaty completed nuclear weapons tests in the atmosphere, in space and underwater . The nuclear weapons tests of these states now only took place underground. Since then, global pollution has decreased again due to the partial radioactive decay of the released nuclides.

France and China continued to test above ground:

The French President Jacques Chirac declared on January 29, 1996 the end of the French nuclear weapons tests. A few months earlier, he had had another series of tests carried out on the Mururoa Atoll , which sparked international protests, especially in the Pacific region.

An international nuclear test ban treaty has been available for ratification by the UN since 1996 , which provides for a worldwide end to all tests with nuclear weapons . India , Pakistan and North Korea did not sign the contract. Israel , the US and China have signed the treaty. India and Pakistan continue to conduct underground nuclear weapons tests. North Korea successfully tested one atomic bomb each on October 9, 2006, May 25, 2009, February 12, 2013 and January 6, 2016 (for details see North Korean Nuclear Weapons Program ). Previously, on September 9, 2004, there was a major detonation in the Ryanggang-do region (North Korea), which was interpreted by some sources as a nuclear weapon test, which the North Korean government denied. The 1979 Vela incident may have been a nuclear test of South Africa and Israel.

From 1998 the USA carried out a series of subcritical tests (“Stockpile Stewardship Program”). In a subcritical test, 45 to 450 kilograms of chemical explosives are detonated with small amounts of weapons-grade plutonium at a depth of around 300 meters. The experiment with less than the critical mass necessary for an atomic chain reaction - therefore "subcritical" - investigates the behavior of plutonium. The data obtained are intended for computer simulation and can be used for weapon development.

According to a secret 1998 report published by Le Parisien newspaper in 2010 , France deliberately exposed conscripts to ionizing radiation during French nuclear tests in Algeria from 1960 to 1966 . “France wanted to research whether the combat capability of troops was decreasing. [...] 35 minutes after the atomic explosion, a group of troops advanced on foot and without protective clothing up to 700 meters to the center. "

“Many of the soldiers then developed cancer and other radiation-induced diseases . The soldiers' children and grandchildren also suffer from secondary diseases. France wants to compensate victims of the nuclear tests for the first time this year. For nearly fifty years, the Department of Defense denied that people were harmed in the nuclear tests. The surviving nuclear test victims have joined together in a veterans' association - 'Aven'. They complain that compensation payments have been delayed for so long and are subject to severe restrictions. So only some of the illnesses are recognized as worthy of compensation. According to the Ministry of Defense , 150,000 civilians and soldiers were involved in the 210 nuclear tests in the Algerian Sahara and Polynesia. "

In October 2018, France was sued before the International Criminal Court in The Hague for crimes against humanity. Because of the consequences of the 193 nuclear weapon tests in the years 1966–1996 on the Mururoa Atoll and the Fangataufa Atoll in French Polynesia on the population, such as the increase in cancer cases.

Since 2010 a compensation mechanism has been (French?) Law. Victims' associations in French Polynesia are not satisfied with the size.