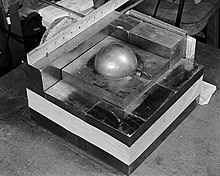 Critical mass referred to in the nuclear physics and nuclear engineering the minimum mass of from fissile existing material object, from which the effective neutron production a chain reaction of fission can be maintained.

A quantity of fissile material has the critical mass if, on average, exactly one of the neutrons released during each individual nuclear fission triggers another fission; the remaining neutrons leave the object or are absorbed without triggering any further fission. The reaction rate is therefore constant, the multiplication factor is equal to 1 - one speaks of criticality . If the existing mass exceeds the critical mass, more than one further cleavage is triggered on average per cleavage, so that the reaction rate increases. One then speaks of a supercritical mass . Similarly, a multiplying medium with a multiplying factor below 1 is called subcritical .

The higher the density, the lower the critical mass. The lowest critical mass is required when the object is spherical. In the case of shapes other than a sphere, the critical mass increases because the ratio of surface to volume and thus the loss of neutrons to the outside are greater.

A neutron absorber increases the critical mass, a moderator or a neutron reflector surrounding the object reduces it.

Tables of the critical masses of various nuclides generally relate to a homogeneous, uncompressed sphere made from the pure material without a reflector. These are summarized in the following list with the reflected and unreflected critical mass for fast, unmoderated systems. Unless otherwise noted, the data are compiled by the French IRSN.

Most of these data are theoretically calculated. Experimental data are only available for some uranium, neptunium and plutonium isotopes. The sometimes considerable uncertainties can be explained by the insufficiently known cross- sections of the individual nuclides. Even apparently exact data in this table are subject to great uncertainties. There are conflicting data on whether 231 Pa can sustain a chain reaction. This is also uncertain for 228 Th and cannot be verified on the basis of the data publicly known to date (12/2008). According to the geometries, these data relate to rapid splits. In aqueous solution, the critical mass for some nuclides can be reduced by more than an order of magnitude. No evaluated data are available for the nuclides 248 Bk, 248 Cf, 252 Es and 258 Md. 257 Fm is able to sustain a chain reaction, but data on critical mass are not available.

In the case of a nuclear weapon , two sub-critical parts, or z. B. a subcritical hollow sphere, assembled with the help of a chemical explosive device to a prompt supercritical mass. In order to manage with the smallest possible amounts of fissile material, various techniques are used:

compression
The chemical explosion compresses the material very quickly into a ball, so that the increase in density leads to the critical mass.
Neutron reflector
The critical mass can be reduced by using a neutron reflector. However, the total weight of such a construction is relatively high.

Depending on its size, a nuclear reactor also contains a multiple of the critical mass of fissile material. However, the fissile material is spatially distributed and interspersed with other materials, e.g. B. with non-fissile nuclides, cladding tubes, coolants, neutron absorber material - but also with moderators . Uncontrolled criticality is prevented here by several independent safety features and devices that can make the reactor subcritical either by withdrawing the moderator or by introducing absorbers - the latter in particular due to the cadmium or boron compounds contained in the so-called control rods . The delayed criticality required for operation is also set by means of the control rods in power reactors and most research reactors .

Nevertheless, the possible creation of a critical mass in the sense described above, i.e. a sufficiently large compact accumulation of pure fissile material, plays a role in the prevention of serious accidents with core meltdown . More recent reactor designs have a core catcher to catch the corium , which must also prevent recriticality, i.e. the unintentional new creation of a critical mass in the event of moderators from the damaged reactor core.