The title of this article is ambiguous. Further meanings are listed under chain reaction (disambiguation) .

A chain reaction is a physical or chemical conversion (reaction) that consists of similar, mutually dependent reactions. A product of an individual reaction is the starting product ( reactant , starting material ) for a subsequent reaction . The reaction chain can be linear or branched.

An exponential law of time is typical for branched reaction chains . The reaction rate (number of individual reactions per time interval) can increase or decrease over time or be constant (see examples below). “Chain reaction” does not mean - contrary to a common misunderstanding - that the process must constantly accelerate or spread and lead to a catastrophe . Also, not every avalanche-like growing process is a chain reaction, especially thermonuclear explosions.

The term chain reaction is used in the same way in everyday language, see domino effect or chain letter .

Chain reactions do not have to consist of a single type of partial reaction. For example, a reaction that alone would lead to only linear reaction chains can be combined with another reaction that leads to chain branches. Chemical chain reactions are important, e.g. B. in polymerization or radical substitution . In the polymerase chain reaction (PCR), branching reactions are cycled through temperature changes, in which the conversion doubles in each step. A well-known application of PCR is the determination of the genetic fingerprint .

Processes with energy but not product transfer, in pure form such as detonation , are not called chain reactions. Often, however, the transitions are fluid. Many combustion processes start with predominantly linear reaction chains, see chlorine detonating gas , but reach a temperature more or less quickly ( ignition delay ) due to the release of energy at which thermal dissociation reactions dominate via chain branches that may run in parallel. This is the usual condition with a burning flame . The reaction rate can be controlled by supplying the reaction materials. 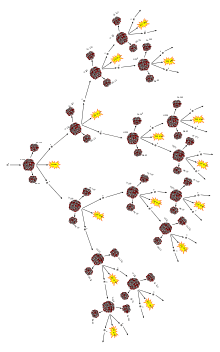 The splitting of a suitable atomic nucleus triggered by the absorption of a free neutron releases some neutrons again (on average between two and three neutrons, depending on the split nuclide and the energy of the triggering neutron). These can split further nuclei, releasing new neutrons, etc.

The control in the reactor is mostly carried out by removing neutrons from the reaction by means of suitable non-fissile substances ( neutron absorbers ). For example, in pressurized water reactors, the amount of a boron compound dissolved in the cooling water is changed for slow and permanent changes ; The control rods are used for short-term corrections and for switching off .

A nuclear weapon , on the other hand, is designed to increase the reaction rate as quickly and as quickly as possible. Neutron absorbers apart from the fission material itself are avoided here in the construction.

The picture shows schematically a splitting chain reaction with a rapidly increasing reaction rate, here: doubling in each generation. (The direction from left to right shows only the temporal, not the spatial sequence. In reality, the released neutrons move in a space containing fissile material in all spatial directions.)

Even before the discovery of nuclear fission, Leó Szilárd was thinking about the possibility that other types of nuclear reactions , which are triggered by neutrons and then release neutrons themselves, could take place as chain reactions. But this is not the case. In order to be able to achieve a multiplication of k = 1 or higher, the reaction must release more neutrons than it consumes; in order to reproduce without energy input, it must be exothermic . As is now known, nuclear fission is the only reaction that fulfills both conditions. All (n, 2n) -, (n, 3n) -, (n, x2n) - and similar reactions (x denotes one or more arbitrary particles) are endothermic .

Some fusion reactions form reaction chains in the sense of subsequent reactions within a reaction mechanism , such as the various reactions of the proton-proton reaction , which leads to the formation of helium in stars . But this is not a chain reaction because the reaction steps are not similar.

Chain reactions also occur in the independent gas discharge and as an avalanche breakdown in semiconductor diodes. A charge carrier accelerated in the electric field generates further charge carrier pairs in the event of collisions.

A chain reaction with an initially increasing reaction rate can be illustrated with mousetraps: the tense trap carries a ball on the striking bar, which is greatly accelerated by the trigger mechanism. If it hits one or more other mousetraps, it triggers them so that more balls come into play.