A lahar is a stream of mud and debris that emanates from a volcano . The word comes from Javanese . In the process, eruptive material from blocks, some of which are meter-sized, mixes with loose sediments and water. Depending on the slope of the terrain, lahars can reach speeds of up to 100 km / h due to gravity, flow over 100 km and flood large areas. They can be triggered by a volcanic eruption, but can also arise completely independently of it. Depending on how they are formed, lahars can be up to 100 ° C.

The definition is not entirely uniform in the literature. The Encyclopedia of Volcanoes limits the term to mud flows in the broader sense, which have a sediment content between 20% and 90% and originate from a volcano. In sedimentological terms, this corresponds to a debris flow (sediment proportion approx. 50–60% to approx. 90%) and a hyperconcentrated flow (sediment proportion between 20% and 50–60%). Mud streams with lower sediment concentrations transport sediment like rivers, either in suspension or as ground transport. The Encyclopedia of Volcanoes also recommends limiting the term lahar to the process and not to the deposit, although the term in the literature has meanwhile been extended to include the deposits ("fossil lahars").

The prerequisites for the formation of lahars are:

Lahars can have a strong erosive effect on their way down the valley, especially in loose volcanic masses. In the process, embankments are washed away and slopes are undermined, and secondary smaller landslides can also be triggered. In general, the more water the sludge flows, the higher the erosion. The decisive factor for erosion, however, is that very large amounts of water or a mixture of mud and water drain off in a short period of time. A tidal wave erodes more than a continuous runoff.

Change in the lahars when draining

Traces of the catastrophic lahar of Armero , Colombia, 1985

Flood currents, i.e. water currents with less than 20% sediment flow that originate from volcanoes, can also change to lahars through the absorption of sediment. This slows down the flow rate, but it happens rarely. Lahars can also be “diluted” by further absorption of water and thus become “normal” flood currents. Most of the time, however, lahars absorb sediment and water and do not change significantly in their flow behavior until they are deposited. When draining, lahars literally “collect” everything that lies on their way.

While the immediate vicinity of volcanoes, which is most threatened by eruptions, usually remains unpopulated, the wider surroundings of the volcanoes are often densely populated because of the fertile soils. The threat from the volcanoes there is rated as low. Lahars therefore have a considerable potential for destruction, primarily due to their large flow range.

The sediment structures of a lahar do not differ from those of a debris flow and a hyperconcentrated current. Depending on the initial composition , debrites , diamictites , paraconglomerates and breccias are formed . Basically, they only differ from “normal” rubble and mud flows in the volcanogenic material of which they are predominantly made. There are transitions to "normal" mud flows.

Due to the sudden covering with mud masses, many living things can also be fossilized . A fossil deposit can arise. 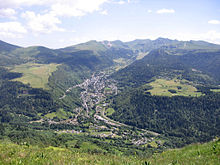 About 5600 years ago, a huge lahar was formed at Mount Rainier in Washington state . The volume was calculated to be around 3.8 km³. It filled valleys with up to 200 m of sediment, covered a distance of up to 120 km and continued to flow 20 km under water at the bottom of Puget Sound .

At the Monts Dore in the French Auvergne , a lahar covered more than 30 km in the Tertiary .