The title of this article is ambiguous. Further meanings are listed under Polyphemus (disambiguation) .

Odysseus and his companions blind Polyphemus. Detail of a proto-Attic amphora by the Polyphemus Painter , around 650 BC. BC, Museum of Eleusis , Inv. 2630. 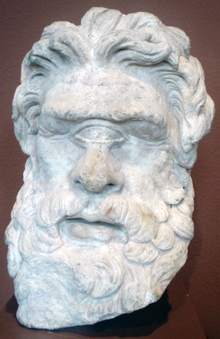 Polyphemus ( ancient Greek Πολύφημος Polýphēmos , "the much-vaunted") is a Cyclops (or Cyclops), a one-eyed giant , in Greek mythology . He was a son of Poseidon and the sea ​​nymph Thoosa , daughter of Phorkys .

Polyphemus in the Odyssey

The earliest mention of Polyphemus is found in Homer's Odyssey . The author does not explicitly describe the Cyclops as one-eyed, but according to other ancient sources they only had a single circular eye located in the middle of the forehead (the " Cyclops eye "), which Homer presumably assumed to be known. In the Odyssey, the giant lives with other Cyclops ( Κύκλωπες Cyclopes "circle-eyed") on a coast with a forest-covered island some distance away. a. Sheep to be herded. Polyphemus lives apart from the rest of the Cyclops in a cave and is a shepherd of animals. Soon after the Trojan War, Odysseus lands with one of his ships on the coast (only later sources have identified that island with the Cyclops Islands off the coast of Etna in Sicily ) and enters Polyphem's cave with twelve companions. When the Cyclops drives his sheep into his home and notices the intruders, Odysseus introduces himself as a shipwrecked Greek and asks for hospitality. Polyphemus does not grant hospitality, but rolls a rock in front of the exit and eats two of Odysseus' companions. When the giant goes to sleep, the Greeks do not dare to kill him, as they cannot roll the stone away together either.

The next day the Cyclops eats human flesh again, but Odysseus then serves him strong wine. The drunken giant now wants to find out his name from Odysseus, who, however , cunningly calls himself nobody , in Greek Οὖτις (a pun that can hardly be reproduced in German, since Outis also means "Odysseus"). When Polyphemus fell into a deep sleep, the captured Greeks blind him by sticking a glowing stake in his eye. In his pain, Polyphemus yells to the other Cyclops for help. When they asked what had happened, he replied: Nobody blinded him. Nobody tried to murder him. Then the other Cyclopes do not care about him.

When the blind man had to let his sheep out to the pasture the next morning, he felt their backs one after the other. Odysseus and his six surviving companions manage to escape from the cave because he advised them to cling to the belly of the sheep. Once back on the ship together, Odysseus mocks the blind giant who almost hits him with a rock throw. When Polyphemus learned of Odysseus' real name from the mouth of Odysseus, he remembers that the seer Telemus had once warned him that the Greek hero would lose his eye. The giant then prays to his already hostile father Poseidon for revenge, begging him not to let Odysseus return to his homeland. Poseidon answers the request. So it comes to the ten-year odyssey of Odysseus, and only through the intervention of Pallas Athene and Zeus does the hero finally get home to his wife waiting for Ithaca , admittedly with complete loss of his crew.

Odysseus and his companions blind Polyphemus, group reconstruction, Grotto of Tiberius , Museo Archeologico di Sperlonga . The fragments belonged to a Roman copy of a Hellenistic original.

Distribution and origin of the Polyphemus motif

The main plot elements of the story of Odysseus and Polyphemus (including "A monster checks animals that go away.") Can be seen in the folklore of many other European ethnic groups , often summarized under the title "The Blinding of the Ogre ". Wilhelm Grimm collected versions in Serbian, Romanian, Estonian, Finnish, Russian and German. Versions in Icelandic , Lappish , Lithuanian , Basque , Syriac, and Celtic are also known. The story The Robber and His Sons is mentioned as a German variant of the Polyphemus motif . In an old Icelandic variant, children caught by a giantess put on pig skins to escape from their cave.

Due to the widespread use of the central plot elements, the Finnish School assumes a common origin. Based on a total of 98 elements from act 44 different traditions a was added phylogenetic reconstruction performed. This method, borrowed from evolutionary biology, is used to determine the genetic origins or relationships of myths.

The tradition in the version of the Valais turned out to be the one that came closest to a prehistoric, European original version .

Greek poets and visual artists essentially followed this narrative of the Odyssey in the centuries that followed. Representatives of the older comedy such as Epicharmos and Kratinos or the satyr drama Cyclops by Euripides should be emphasized .

The poet Philoxenus , who comes from the Greek island of Kythera , produced a new, burlesque motif in a dithyramb in which Polyphemus is portrayed as the unfortunate suitor of the Nereid Galateia . Polyphemus patiently but ruthlessly wooed the nymph, who scorned him and mischievously rejected him. The lovesick giant sought solace in song and dance. The love of Cyclops also made use of Odysseus for his cunning. The episode of Polyphemus and Galatea was picked up in middle Greek comedy and by well-known Alexandrian poets such as Callimachus and Theocritus . Ovid also created a tragic moment for this story by introducing the figure of Acis . Acis was a son of Faunus and the nymph Symaethis . Galatea lost her heart to the pretty Acis, until Polyphemus smashed him with a boulder out of jealousy.

In modern literary and artistic reception, the focus is not on the Homeric story, but on the love of Polyphemus, which the nymph does not return.

One of the two doors in the Reichstag building that was used for the “ mutton jump ” was inlaid with the name of this voting process and showed Polyphemus as a shepherd with a shepherd's staff counting his sheep.