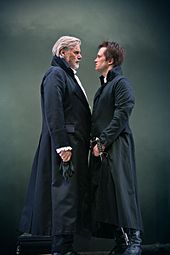 Peter Simonischek spent his childhood in Markt Hartmannsdorf in southeast Styria , where his father was a dentist. He spent his middle school years in the boarding school of the Stiftsgymnasium in Sankt Paul im Lavanttal , where he appeared several times in the school theater. The father wanted him to study medicine, which the son was reluctant to do. Instead, he began studying architecture at the Technical University in Graz. At the same time, under pressure from his father, he began training as a dental technician, which he did not finish.

During his time at the university, Simonischek's interest in acting grew and he secretly registered at the Academy for Music and Performing Arts in Graz. After completing his studies, he was initially engaged in St. Gallen , Bern and at the Schauspielhaus in Düsseldorf , then from 1979 to 1999 as an ensemble member of the Berlin Schaubühne under the direction of Peter Stein and later Andrea Breth . Peter Simonischek has been a member of the Vienna Burgtheater ensemble since the 1999/2000 season .

Since 1982 he played leading roles in the Salzburg Festival since the summer of 2002 (until 2009), the title role in everyone by Hugo von Hofmannsthal . Since 1995 Simonischek has played in the German-language premiere of Yasmina Reza's satire " Art ."

In 2016, Simonischek won the title role in Maren Ade's feature film Toni Erdmann, internationally known and highly praised by the specialist critics . In the same year he was the first Austrian actor to win the European Film Award for Best Actor for the role of an aging music teacher who wants to lure his joyless manager daughter (played by Sandra Hüller ) out of the reserve in the shape of a weird alter ego .

From the divorced marriage with the actress Charlotte Schwab , the son Max , who is also an actor, emerged. Peter Simonischek has been married to the Carinthian actress Brigitte Karner since August 26, 1989 . From this marriage he has two sons who received their musical training with the Vienna Boys' Choir .