This article is about the German television series Derrick . For additional meanings, see Derrick (disambiguation) .

Derrick is the title of a German television crime series with Horst Tappert in the title role of Munich Chief Inspector Stephan Derrick and Fritz Wepper in the role of his partner, Inspector Harry Klein. The first broadcast took place between October 1974 and October 1998 on German-language television. Herbert Reinecker was responsible for the scripts for all 281 episodes, and Helmut Ringelmann produced the series on behalf of ZDF , ORF and SF . Directed by Helmuth Ashley , Zbyněk Brynych , Gero Erhardt , Dietrich Haugk and Alfred Weidenmann , among others .

Derrick, the best-selling German series in television history, was broadcast in over 100 countries worldwide.

With a few exceptions, the filming locations were in the greater Munich area.

The series accompanies the chief inspector Stephan Derrick and his assistant, inspector Harry Klein, from the murder commission of the Munich criminal police in the investigation and resolution of murder cases in the greater Munich area. 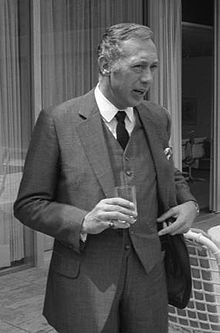 Horst Tappert plays the title role of the Munich chief inspector Derrick. The figure of Stephan Derrick wears bespoke suits, a tie with a perfect tie knot, a light trench coat , dark leather shoes and as a watch either a gold Rolex Day Date , a Rolex GMT-Master or an IWC Da Vinci . From the 1980s on, he also wore aviator glasses. His weapon, a Walther PPK in caliber 7.65 mm and later a .38 Special Smith & Wesson , he only uses in an extreme emergency.

Actor Tappert described the character Derrick after reading the scripts at the end of May 1973, that is, before the broadcast began, as a “man who does not seem so incredibly pleasing at first glance and for whom everything does not go smoothly in the civil servant career is. You could even call it brittle and a little difficult. "

In the early episodes Derrick still smokes, in later episodes he is portrayed as a sworn non-smoker. In a restaurant he drinks mineral water or wine, less often a glass of beer. He mostly drinks coffee in his office.

Stephan Derrick is not married and lives in a condominium at 53 Wilbrechtstrasse in Munich. He has a girlfriend twice: the psychologist Renate Konrad, played by Johanna von Koczian , in episode 11 ("Pawn Shop") and episode 20 ("Shock ") And the interior designer Ariane, played by Margot Medicus , in episode 115 (" A game with death ") and episode 117 (" Attack from the Dark "). In episode 36 ("Murder in TEE 91") Derrick flirts with the spy Andrea ( Alwy Becker ), but in the end gets a basket .

Fritz Wepper plays the role of Inspector Harry Klein, Derrick's assistant on the homicide squad. Wepper played the character of Harry Klein from 1969 to 1974 in the crime series Der Kommissar .

Herbert Reinecker had already made a name for himself in the crime genre by writing scripts for Edgar Wallace films and " street sweepers " like Babeck or 11:20 am . Even before his greatest popular success at the time, Der Kommissar , ran out in early 1976 after 97 episodes, he wrote episodes for Derrick in parallel. The artistic role model for him was " Maigret " author Georges Simenon , who put the psychology of the characters in the foreground. Reinecker had already used the name Derrick in 1973 in the episode "Rudek" of the series Der Kommissar ; Sky du Mont played the pimp Manuel Derrick there.

The theme song is from Les Humphries . Frank Duval composed the music for 105 episodes and contributed some songs (including Love , 1977, Angel of Mine , 1980 and Face to Face ), which rose to hits in the charts . The background music for the first episode ("Waldweg") comes from Peter Thomas . Eberhard Schoener was there with 56 film scores , Helmut Trunz with 19, Martin Böttcher with nine, Hans-Martin Majewski and Hans Hammerschmid with six each, Eugen Thomass with five, Erich Ferstl with four, Rolf Kühn with three, Klaus Doldinger and Roland Kovac with two each, and Dieter Bohlen , Klaus Weiss and Rolf Alexander Wilhelm with one each.

Telenova Film- und Fernsehproduktion GmbH produced the series on behalf of ZDF , Austrian Broadcasting and Swiss Television and under the direction of TV producer Helmut Ringelmann .

Filming began under the direction of Theodor Grädler in the summer of 1973.

"Waldweg" was the first episode to be broadcast. It ran on October 20, 1974 on ZDF, with 31 million viewers. In 1978 the broadcast date of the series moved to the traditional ZDF crime scene on Friday at 8:15 p.m.

The first reactions were devastating. Der Spiegel (49/1974), for example, criticized Derrick in an article entitled “Bad impression”. Reinecker and producer Helmut Ringelmann had told the crime stories the other way around : The murderer is known, and the audience watches the criminalists as they find out about the perpetrator. The scheme of showing the murder at the beginning of the film and then the investigation was previously successful in the US series Columbo with Peter Falk (from 1971). The viewer of German series was too used to the old scheme ( “Who is the culprit?” ). And (Der Spiegel (49/1974)): “In this case, in order for the matter to remain exciting, the detective, who knows less than the spectator, would have to make a particularly interesting figure, would have to have perpetrator psychology, the history of the crime and the investigation of the crime in itself of extraordinary charm. ”The concept of the series, the individual episodes of which were originally planned to last 90 minutes, has now been changed step by step and adapted to the tastes of the audience.

After it became known in April 2013 that the main actor Horst Tappert was a member of the Waffen-SS during the Second World War , the ZDF and television stations in the Netherlands , Belgium and France reacted by immediately suspending further repetitions of the popular series.

In the last episode “The Farewell Present” on October 16, 1998, Derrick was promoted to Europol and took leave of Munich. In the farewell scene, his colleagues Leo Kress, Gerd Heymann, Axel Richter and Werner Riedmann from the series Der Alte congratulated him . TV producer Ringelmann was also present. Reinecker would have liked to continue the successful production, but Tappert no longer wanted. According to interviews, the materials had gradually become "too philosophical" for him.

Harald Schmidt and Herbert Feuerstein parodied the sedate style of the Derrick episodes and the characteristic type of dialogues in Reinecker's scripts in early 1992 on the TV show Schmidt One another .

Jochen Busse brought another parody in 1995 on the comedy show RTL Saturday Night . There Derrick and assistant Klein drove to a "Brock" to solve a murder. The fact that they are going to see Brock is repeated over and over again, as is the following dialogue between Derrick and a suspect in Brock's house, which consists of constant questions and counter-questions: “A murder has happened.” - “A murder ? ”-“ Yes, someone has been murdered. ”-“ Murdered? ”And so on. Later the Derrick paris became a permanent part of the show. The role of derrick played Stefan Juergens , Tommy Krappweis parodied Harry Klein. In the Netherlands in the nineties there were some pasties in very slow German with Dutch subtitles by the satirical group Jiskefet with the title Tampert, z. B. The murder case .

In a scene in the film comedy Stadt talk (1995), Katja Riemann's film character, who can hardly sleep due to remorse because of her secret affair with the husband of her best friend, says: "I already look like Derrick."

In April 2004, the Derrick cartoon Derrick - Duty calls with the original voices of Tappert and Wepper was released in cinemas .

In the film Migratory Birds… Once after Inari , the protagonist is followed to Finland by a commissioner Stefan and his assistant Harry, who develop an ever closer relationship in the course of the film .

In the Netherlands, a telephone number was introduced in 2000 where citizens can contact the police - in non-urgent cases, to relieve the emergency call. An information spot with the message "Geen spoed - wel politie" (no hurry - but police) showed Tappert in an apartment and the like. a. when shaving and when preparing bratwurst and sauerkraut . He was constantly bothered by callers trying to report something to the police.

In 2012, a 20-part comedy series was broadcast on ZDFneo under the title Immortal Cops - Derrick and Harry investigate , with the episodes each being less than three minutes long. Scenes from Derrick episodes were re-edited and dubbed comedically with reference to current topics.

Between 2008 and 2013, all 281 episodes with bonus material from MORE Music and Media were released on 19 collector's boxes.

In December 2010 the company Prime Games published the game Derrick - Murder in the flowerbed , which is played in point-and-click manner and in which the player can solve a murder case together with Derrick and Harry.

This BMW of the 5 series became popular through Derrick

Some Derrick episodes met with criticism because of their act, which many perceived as too cruel. The murder scene in the first episode “Waldweg” (director: Dietrich Haugk ) has only been broadcast in German-speaking countries for some time in a shortened, clearly defused version, which is also included in collector's box 1. The uncut scene is still broadcast in the original in France, for example, most recently on March 2, 2010 on France 3 . In episode 19 (“Dead birds don't sing”) there were five deaths: three victims were shot, one of whom was additionally burned with acid, one was stabbed to death and one was drowned in the mud bath. There was criticism from both viewers and those responsible. From then on there was a maximum of three victims per broadcast. Episode 20 ("Shock") was initially not repeated for similar reasons: A child was killed.

The often quoted sentence "Harry, get the car!" Does not appear in the series. A similar sentence was, however, in the previous series Der Kommissar (episode “The End of a Dance Fun”); In the 2nd Derrick episode ("Johanna") Derrick says to Klein: "Harry, we need the car, now!", whereupon Klein rushes out of the room and fetches the car. It is similar in episode 73 ("On an estate"). Derrick to Harry: "Harry, I need the car!" A similar sentence was also heard well before Derrick. In 1971 Rolf Schimpf , the later "old man", ordered his assistant in the series Percy Stuart (episode "Die Weltregierung") as Hamburg commissioner: "Don't nonsense, get a car!"

The use of BMW models of the 5 series from the beginning of the series was also popular. Later Derrick drove a 7 Series BMW , later the successor model . In reality, however, driving luxury vehicles in the police force is rather unrealistic.

Derrick's pronounced bags under the eyes inspired the editor of an automobile magazine to call the 3-series BMW of the 1998 model year the "Derrick model" because of its headlight shape, which was quickly taken up and copied by colleagues and the readership, so that even BMW employees in-house the 3- series of the E46 model series at times so called.

The characters Derrick and Klein carry the official titles "Kriminaloberinspektor" and "Kriminalinspektor" respectively, although these ranks in the Bavarian police enforcement service no longer exist since 1972/1975. In later episodes, naming the rank is usually avoided.

Horst Tappert and Fritz Wepper were together in front of the camera in 1969. In the Edgar Wallace film The Man with the Glass Eye , Tappert also plays a detective inspector and Wepper the son of a murderess.