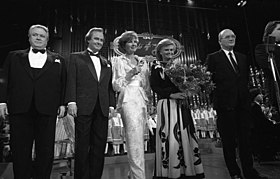 After leaving school ( Obersekunda ), Strack studied in Stuttgart at the State University for Music and Performing Arts with Paul Riedy and Lilly Ackermann . In 1949 he made his debut as Ferdinand in Schiller's Kabale und Liebe at the Oberhausen Theater , followed by engagements in Darmstadt, Wiesbaden, Nuremberg and Hanover, among others.

Until his death he was seen in over 400 different roles in theater, film and television. One of the highlights of his career was working with Alfred Hitchcock on The Torn Curtain . He gained great popularity through television series such as A Fall for Two , These Drombuschs , With Body and Soul and The King . He also participated in the episode series Hessian Stories .

Günter Strack was also active as a voice actor and lent his voice to internationally known colleagues such as Edward G. Robinson ( The Little Caesar ) , Spencer Tracy ( The Seventh Cross ) and Orson Welles ( Journey of the Damned ) . He dubbed William Conrad in the US television series Cannon and Nero Wolfe and the Obelix in the Asterix film Operation Hinkelstein . Not only because of his penchant for Hessian dialect roles, Strack also advanced to become a popular actor .

In 1989, Strack advertised the spirit Malteserkreuz Aquavit in an advertising campaign with the slogan “You don't treat yourself to anything else”, an ironic allusion to his enormous corpulence. Günter Strack was also a hobby winemaker . He operated viticulture in Münchsteinach , the birthplace of his mother, and Iphofen .

In 1994 ARD produced the film Der Dicke with Günter Strack as Gregor Ehrenberg . A continuation could no longer be realized due to Strack's illness. From 2005 to 2013, an offshoot with Dieter Pfaff in the lead role ran on ARD .

On June 28, 1996, Strack suffered a stroke, followed a short time later by an enterococcal infection. After his recovery he made the film Dr. med. Murder , the last film in the series The King . On the evening of January 18, 1999, Günter Strack died of heart failure at the age of 69. Two days earlier he had last appeared in public at the German Film Ball . His grave is in the cemetery in Münchsteinach in Central Franconia .

In 1990 Günter Strack was awarded the Federal Cross of Merit, 1st class.

In memory of Strack, the Günter Strack TV Prize was launched in 2000 .