This article explains the German film Der Schattenmann from 1996; the Korean film Bin-jip - The Shadow Man can be found at Bin-Jip - Empty Houses .

The Shadow Man is a five-part television thriller by Dieter Wedel from 1996 .

After a failed police operation in which his partner Otto Tötter was killed, Chief Inspector Charlie Held is appointed as an undercover investigator on the powerful mastermind of the Frankfurt underworld, Jan Herzog , whom he holds responsible for the murder of Tötter.

With generous funds under the cover name "von Hellberg", Held is increasingly enjoying the pleasant life that he has to play for the underworld boss in his role. With the attractive Barbara at his side, he becomes a friend and protégé of Herzog and is soon even considered his successor. His private life as a "simple" police officer, his real wife and his old home environment are increasingly becoming a burden for him.

The early retired police officer Erich “King” Grobecker is employed as a bodyguard and driver “von Hellbergs” and copes better with this role than a hero. Grobecker behaves in a morally correct manner and observes with concern how Held becomes increasingly entangled in his role and can no longer cope with reality.

One reason for this is that underworld boss Herzog is not portrayed as "the big gangster", but also as a loving father and trusting friend who is committed to solid moral values, but who can also ruthlessly carry out his projects.

Held sinks deeper and deeper into favors, false loyalty to Jan Herzog, corruption and the beautiful world of the rich. He loses his wife and ends up losing his job as a police officer and goes to jail. During an outdoor activity he can persuade Herzog to admit that he is indirectly complicit in the death of his wife Anneliese. He is eventually released from prison and is picked up by his friend King and his daughter.

On the way back to King's apartment, it is indicated from the off that all three are victims of a car bomb. Jan Herzog had earlier mentioned in a conversation with his late son Louis that he himself could “see to it that certain things happen or not” from prison. It remains unclear whether Herzog will actually be charged or even convicted. 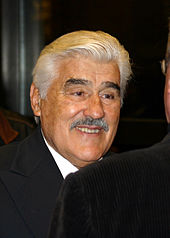 Shortly after it was broadcast, there was heavy criticism of Dieter Wedel in the German media. The accusation was that he had stolen scenes and plot elements from various Hollywood films as well as from John le Carré's 1993 novel The Night Manager . The staged dangerous situation of the son, from which the investigator rescues him in order to gain the trust of the target person, occurs there as well as a play on words about the term “vicious cave”. Were also mentioned by name The Godfather , Three decades in the Mafia - Goodfellas and The Untouchables - The Untouchables . Numerous sayings are borrowed from the film Wall Street . Barbara Sattler's (played by Jennifer Nitsch) embarrassingly uncovered lighter theft (DVD episode 2, chapter 11: Garden party, 1:45, 1:50, 1:52) comes from Fellini's Il Bidone ("Die Schwindler", 1955, with subtitled original scenes extended German DVD version, there approx. 0:45:00 to 0:50:00).

Wedel later admitted in remarks that he had used other films, but said that he thought the excitement about it was exaggerated.

These and similar criticisms were also heard about Dieter Wedel's 1992 film “ The Big Bellheim ”.