The daughter of the actress Alice Franz and the sculptor Gen Golch-Engelbrecht gained her first acting experience and synchronized children's roles at the age of six. a. the "Jeff" in the television series Lassie . After graduating from high school, she studied classical singing at the Richard Strauss Conservatory in Munich, at the Mozarteum in Salzburg and at the Guildhall School in London . She also took acting lessons from Rosemarie Fendel . As a stage actress, she appeared at both Munich theaters and at the Paris “Théâtre de la ville”. 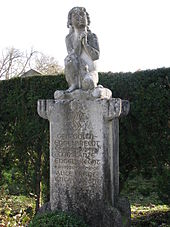 Grave of Constanze Engelbrecht in the Munich North Cemetery

Although she initially aspired to a career as a soprano, later film and television formed her artistic focus. In 1980 she became known to a wide audience through the television multiparter Unter der Trikolore and the Lion-Feuchtwanger film adaptation of Exil . In 1989 she played the same role again in the cinema adaptation of Feuchtwanger's drama. This was followed by other television productions such as the family series These Drombuschs , television films such as the black comedy Peace and quiet, Bruno! (with Armin Mueller-Stahl ), Halali or Der Schuß ins Brötchen and literary adaptations such as the film adaptation of the novel Deep Water by Patricia Highsmith (with Sven-Eric Bechtolf ). In addition, she made numerous guest appearances in television series such as Derrick , The elegant dog , The Wiesingers and The men from K3 . Her last major role was in 1998 alongside Gérard Depardieu in the television production of the Dumas film The Count of Monte Christo .

Since 1980 Constanze Engelbrecht lived with her future husband, the author, director and actor François Nocher and her daughter Julie Engelbrecht (* 1984) mainly in Paris and in Chiemgau near Wasserburg.

In 1998 she was diagnosed with breast cancer. In July 2000 she succumbed to the consequences of the disease. Constanze Engelbrecht was buried in the north cemetery in Munich.