Mario Adorf (born September 8, 1930 in Zurich , Switzerland ) is a German actor . He is one of the most prominent contemporary actors on stage, in the cinema and on television . In addition, Adorf works as a writer and audio book author.

Mario Adorf was born out of wedlock to the German X-ray assistant and later tailor Alice Adorf, who came from the Eifel , and to a married Italian, the surgeon Matteo Menniti from Siderno in southern Italy , in Zurich. When he was three years old, his mother had to put him temporarily in a Catholic children's home because she didn't have the money to feed him. He grew up in Mayen in the Eifel, where he graduated from the municipal high school after attending the Borromean kindergarten and elementary school. From 1950 he studied philosophy , psychology , criminology , literature , music history and theater studies at the re-founded University of Mainz . He was active in a student boxing relay as well as on the student stage. 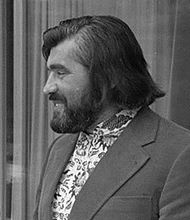 In 1953 he went to Zurich, the city of his birth, to continue his studies, where he worked as an extra and assistant director at the Schauspielhaus Zurich . Shortly afterwards he dropped out of his studies. This was followed by acting training at the Otto Falckenberg School in Munich . In 1954 he appeared several times at the Münchner Kammerspiele . Following his acting training, Adorf had an engagement as an actor at the Münchner Kammerspiele from 1955 to 1962.

After a few minor film roles, he became popular for his portrayal of a psychopathic female killer at Night When the Devil Came . After that he was committed to “rogue roles” for many years. In Winnetou Part 1 he took on the role of Winnetou's malicious opponent Santer , who shot Winnetou's sister Nscho-chi ( Marie Versini ). In an interview in 2013, Adorf explained that to this day people have asked him about this role and confess that they have not forgiven him for this film act for a long time. In the crime comedy The Gentlemen with the White Waistcoat , he played the crook Bruno "Dandy" Stiegler.

Adorf also celebrated success in international cinema . His acting repertoire was mostly expressed in characters that lie between rough servants or crooks and noble Mafiosi or honorable Signori. Adorf's fondness for Italian culture is also striking . In the Italian film Die Assassung Matteotti he played the "Duce" Mussolini . On the other hand, Adorf was able to prove his comedic talent several times.

He also received engagements from Junge Deutsche Film . So he interpreted the dodgy Inspector Beizmenne in the lost honor of Katharina Blum , and father Matzerath in the tin drum . From the mid-eighties, however, his film image changed and Adorf became the ideal cast for patriarchs, in particular for powerful entrepreneurs such as brewery manager in Ex und hopp - a bad game about love, money and beer (1991) or the title role in the four-part TV series The great Bellheim (1993).

Adorf appeared in numerous television films , preferably in those of the director Dieter Wedel such as Jan Herzog in the five-part thriller Der Schattenmann (1996), and worked as a theater actor. In 2007, he was a member of the jury of the Berlin Film Festival, chaired by US filmmaker Paul Schrader . In more than 50 years, Adorf has acted in over 120 films. In recent years he has also appeared several times as a book author (and performing singer). He also worked as a voice actor and, for example, lent his voice to the dragon Draco in Dragonheart .

Adorf says about capitalism : “I don't believe in eternal growth. At some point capitalism will come to an end. "

In 2010 he stated that his greatest wish was to play the lead role in a film adaptation of the life of Karl Marx . Adorf on this: "Being able to really play Karl Marx once, that could be a special opportunity." In 2018 he got the lead role in the ZDF - docu-drama Karl Marx - the German prophet   .

Adorf advocates a more flexible immigration policy in Germany. People do not necessarily have to be integrated or even assimilated; German society has to adapt. In the past, this has also been achieved with Italians and Poles.

At the Berlin & Beyond Film Festival 2012 in San Francisco , Adorf was honored for his life's work

In 1999 Adorf spoke the prologue for the Udo Jürgens song The Crown of Creation , which was recorded with the Berlin Philharmonic . In the same year he also spoke to the judge of the dead in the musical Elisabeth in Essen.

Adorf repeatedly expressed his special bond with Mayen ( Eifel ), the home of his childhood, through local engagements, for example currently as patron of the castle festival there . The city of Mayen granted him honorary citizenship in 2001.

In 2003 Adorf was one of the founding members of the German Film Academy .

Since August 30, 2004 Adorf has been an honorary member of Alemannia Aachen .

Since 2009, Adorf has been committed to destigmatizing the hearing impaired as an “ambassador for good hearing” . Together with a hearing aid manufacturer, he promotes positive use of hearing aids and raises awareness for the early detection and compensation of hearing loss.

On November 26, 2016, he read the annual Advent story in the television show The Advent Festival of 100,000 Lights , hosted by Florian Silbereisen .

The city of Worms and the Nibelungen Festival in Worms have been awarding the Mario Adorf Prize, named after Adorf, since 2018 . It is awarded to actors, stage designers, directors or other members of the Nibelungen Festival who stand out due to their exceptional artistic performance. Adorf himself belongs to the board of trustees of the festival and sits on the jury. Among other things, he initiated the festival in 2002 and was an actor himself in 2002 and 2003.

Adorf's archive is located in the archive of the Akademie der Künste in Berlin.

Mario Adorf's first wife was the actress Lis Verhoeven . The daughter Stella Adorf , also an actress, comes from this relationship . He has been married to Monique Faye for the second time since 1985 .

Star by Mario Adorf on the Boulevard der Stars in Berlin, 2010

Adorf at the Berlinale 2011

Wikinews: Mario Adorf  - in the news