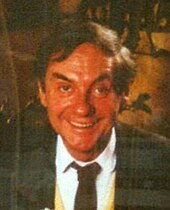 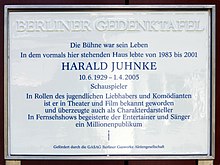 Harald Juhnke was born in the municipal gynecological clinic in Charlottenburg (today the district of Charlottenburg in the Charlottenburg-Wilmersdorf district ) as the son of a police officer; his mother came from a family of bakers. He grew up in a tenement in what was then the working-class district of Wedding (now the Gesundbrunnen district in the Mitte district ) in Berlin. In 1948 he left school to become an actor.

After three and a half months of acting lessons with Marlise Ludwig , he appeared on a stage for the first time on November 9, 1948 in Berlin: In the House of Culture of the Soviet Union he played a Russian officer in the revolutionary play Lyubow Yarovaya . In the then still wandering ensemble Die Vaganten he played, among other things, in the Christian piece You will be like God . In 1950 he was engaged by the Neustrelitz Theater and then by the Freie Volksbühne Berlin .

In the 1950s and 1960s he became known as a film actor . He was hired as a young lover or as a funny Berliner. He himself did not attach great importance to these films:

“When the phone rang and some half-silly character offered me a role in a film, I was only interested in three questions in the 1950s: How much is the fee for the nonsense? How pretty are my partners? Where is the howler wound down, how sunny is it there? "

The 1990s were a comeback for Juhnke as a film actor. In the films Schtonk! , Der Parroti (both 1992) and Der Hauptmann von Köpenick (1997), he earned high praise from critics as a character actor. In 1995 he played the leading role in the film Der Trinker nach Hans Fallada , in which he also processed his experiences with his own alcoholic illness.

Between 1952 and 1994 Juhnke was active in the dubbing . So he spoke z. B. Marlon Brando ( inter alia in Die Faust im Nacken , Morituri and Sayonara ), Charles Bronson ( A Man Without Fear ) , Peter Falk ( A Corpse for Dessert ) , Peter Sellers ( The Pink Panther ) , Robert Wagner (inter alia The Broken Lance ), Woody Allen ( Everything you always wanted to know about sex ... ) and Stacy Keach ( Settlement in San Francisco ) .

Juhnke did the German dubbing for several Disney films, including the voice of the fox Ehrlicher John in the second dubbed version of Pinocchio . In the film Charlie - All dogs go to heaven by Don Bluth , he was heard as the German voice of the German shepherd Charlie B. Barkin . His singing talent was also used in both films.

From 1977 he appeared increasingly on television: first with Grit Boettcher in the ZDF series Ein Verrücktes Paar , then from 1979 onwards, as the successor to the late Peter Frankenfeld , he hosted the show Musik ist Trumpf on ZDF and thus reached up to 30 million viewers. Juhnke's alcohol problems led to the series being discontinued at the end of 1981.

From 1985 he took on the role of the second-hand dealer Ottmar Kinkel in the evening television series Drei Damen vom Grill, which has been running since 1977 . From 1987 to 1989 he played with Eddi Arent in the sketch series Harald and Eddi . He was the first guest on the Harald Schmidt Show .

As a showmaster, he emulated his role model Frank Sinatra in a tuxedo and patent leather shoes . One of his songs was a German version of Sinatra's hit My Way , which, like the song Barfuß oder Lackschuh, he recorded several times in different versions and arrangements. 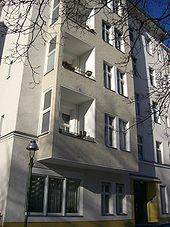 In 1999 Juhnke co-founded the Zille Museum in Berlin together with Walter Plathe and Günter Pfitzmann .

Juhnke was married to the actress and dancer Sybil Werden in his first marriage since 1952 . There were two children from this marriage: daughter Barbara (1953–1955) and son Peer (* 1956), who works as an orthopedic surgeon in Munich . The marriage ended in divorce in 1962. From 1963 to 1971 he was in a relationship with Chariklia Baxevanos . On April 8, 1971, Juhnke married the actress Susanne Hsiao in Berlin-Schmargendorf . She is the daughter of a Chinese restaurateur and an East Prussian . In 1972 their son Oliver Marlon was born.

The public took an active part in Juhnke's alcoholism , especially through the reporting in the tabloids. His alcohol consumption first became public knowledge in 1959. Juhnke had been sentenced to seven months in prison without parole for drunk driving , resistance to state violence , assault and insult . After four months he was released for good conduct and from then on renounced his driving license. Since then, there have been repeated serious alcohol crashes, which often set in in phases of great success, led to claims for recourse from his employers and the man's commitment in all cases , which he stylized, endangered or ended as himself.

In 1981 Juhnke lost his TV show Musik ist Trumpf because ZDF was of the opinion that it could no longer rely on him. In the 1980s, the Müller dairy won him as an advertising medium. a. for buttermilk and kefir and alluded to the consumption of non-alcoholic beverages as an alternative for him. In January 1996 he slapped a reporter from RTL , who was waiting with her television team in front of his house, on the garden fence.

At the beginning of February 1997 he stayed with his son Oliver at the Mondrian Hotel in Los Angeles, from where Juhnke wanted to travel on to filming for the ARD series Klinik unter Palmen . While drunk, he first hit a Florida tourist in the lobby and then hit his son. He was accused of calling a black security guard who had escorted Juhnke to his room a "dirty nigger" and saying that he had been gassed under Adolf Hitler . The incident and the insult caused an international stir and were condemned by German politicians such as the Bundestag deputies Cornelie Sonntag-Wolgast and Johannes Gerster . Some of the tabloids received calls and letters to the editor welcoming Juhnke's statements.

In 1998 his autobiography was published by Rowohlt Verlag under the title My Seven Lives , which he had written with the journalist Harald Wieser .

At a concert on October 11, 1999 in Berlin's Friedrichstadtpalast , Juhnke did not return to the stage for half an hour after the break. Instead, the African-American jazz singer Jocelyn B. Smith appeared as a guest , who was initially whistled out occasionally, and finally by around one hundred of the two thousand spectators. Juhnke first went on stage for a duet with Smith, then broke off the concert and accused the audience of racism. Juhnke and Smith repeated the concert a month later in the same place without any disturbance.

Juhnke had his last relapse in 2000 - he was found in a hotel in Baden near Vienna , where he was doing filming that he could no longer finish. He was diagnosed with Korsakoff's syndrome . His long-time manager Peter Wolf stated at a press conference on December 11, 2001 that Juhnke would never be able to work as an actor again and that his return to the stage was impossible. From then on Juhnke lived in a nursing home in Fredersdorf-Vogelsdorf near Berlin. 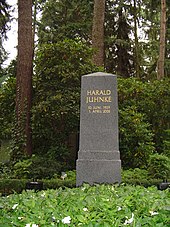 At the end of February 2005, Juhnke was admitted to the Rüdersdorf hospital near Berlin with acute fluid loss and then had to be fed artificially. The actor died on April 1, 2005 at the age of 75 as a result of his illness. On April 9, 2005, a memorial service was held in the Berlin Memorial Church with 800 people in attendance and funeral speeches by the Governing Mayor Klaus Wowereit and the television presenter Thomas Gottschalk . On his last way, Juhnke received a final applause from more than a thousand people in front of the Memorial Church. The commemoration there was broadcast live by the television station n-tv . The subsequent burial at the Dahlem forest cemetery took place in close family circle. The following text from Max Reinhardt can be found on the back of the grave site :

"The real actor is driven by the irrepressible desire
to ceaselessly transform into other people in
order to ultimately discover himself in the other."

The grave is one of the honor graves of the State of Berlin .

Memorial stone for Juhnke after the change

In honor of Juhnke, a memorial stone was unveiled on October 25, 2005 in the Berlin district of Gesundbrunnen in Fordoner Strasse, which shows a relief of the actor. This memorial stone was designed by the Rhineland Palatinate sculptor Eike Stielow. After the design of the memorial stone was largely rejected by the public, it was changed by Joachim Brunken, a childhood friend of Juhnke.

At the end of March 2007 a new variant of the memorial was again presented to the media by Brunken. For this, 70,000 euros had to be raised.

On June 10, 2014 , a Berlin memorial plaque was attached to his former residence in Berlin-Grunewald , Lassenstrasse 1 .

The life of Juhnke was to be filmed in 2019, but this was not implemented until the date of his 90th birthday. (As of December 2019)

Juhnke as a stage actor (selection)

Theater of the Free Volksbühne Berlin :

Advertisement with Harald Juhnke for his father-in - law's Tai-Tung restaurant in the Bikini House on Berlin's Budapester Strasse , near the Zoo station