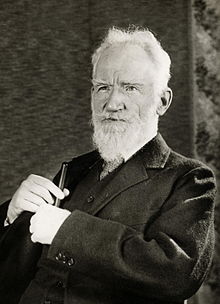 George Bernard Shaw , usually just called Bernard Shaw at his own request (born July 26, 1856 in Dublin , Ireland , † November 2, 1950 in Ayot Saint Lawrence , England ), was an Irish playwright , politician, satirist, music critic and pacifist who Received the Nobel Prize for Literature in 1925 and the Oscar for Best Adapted Screenplay in 1939 .

Shaw came from a Dublin-based family of Scottish Protestant origin and grew up there in difficult family circumstances. His father, George Carr Shaw, was an unsuccessful grain dealer who had a drinking problem. His mother Lucinda Elizabeth Shaw, b. Gurly was a singer who separated from her husband shortly before G. Bernard Shaw's sixteenth birthday and moved to London with her two daughters and their singing teacher. Shaw initially stayed with his father. He suffered from severe social phobia , especially in his youth .

Shaw first worked as a commercial clerk, but soon moved to London to gain a foothold as a music and theater critic. In order to develop his prose, he wrote five novels between 1879 and 1883 , which were rejected by various publishers . Finally, he celebrated his first successes as a music critic for the newspaper Star , for which he wrote masterly ironic comments . For example, he discussed the compositions of Ethel Smyth under the pseudonym "Corno di Basseto" ( basset horn ). Shaw was one of the first music critics to refuse to attach any importance to the gender of the composer in evaluating the work. In 1923 he asked the now ennobled Ethel Smyth in a letter how masculine the work of Handel and how feminine the work of Mendelssohn and Arthur Sullivan actually are. 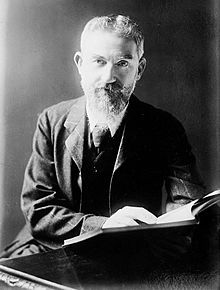 After reading the works of Percy Bysshe Shelley , he became a vegetarian in 1881: "It was Shelley who first opened my eyes to how barbaric my diet was," Shaw said in a 1901 interview. The vegetarianism played henceforth an important role for him; he understood it as a political matter and spoke in this context of solidarity, of "expanding the area of ​​the feeling of togetherness". In 1882 he was reading Das Kapital by Karl Marx in the French translation (transfer into English did not exist). “That was the turning point in my career. Marx meant a revelation, ”he reported later. In 1884 he joined the intellectual-socialist Fabian Society (Society of Fabians), where there were personal overlaps with the vegetarian National Food Reform Society . He soon played a leading role in the Fabian Society, which was not aiming for social change in a revolutionary way, but rather in an evolutionary way. There he was able to spread his political ideas as a speaker. It was in this society that Shaw met his future wife, Charlotte Payne-Townshend, whom he married in 1898. Shaw is also considered a co-founder of the London School of Economics and Political Science (LSE), in which the Shaw Library still commemorates him today.

In 1895 Shaw became a theater critic for the Saturday Review. This step initiated his future path as a playwright. In 1898 his first successful piece, Candida, appeared. Several comedies followed, such as The Devil's Student (1897), Arms and the Man ( Heroes ) (1898), Mrs. Warren's Trade (1898), Captain Brassbound's Conversion (1900), Man and Superman ( Man and Superman ) (1902), Caesar and Cleopatra (1901), Major Barbara (1905) and Androclus and the Lion (1912). Pygmalion , released in 1913 , later became the basis for the musical and film My Fair Lady . For Shaw, World War I represented the last desperate breaths of the 19th century empires. After the First World War he wrote more serious dramas such as Haus Herzenstod (1919) and Die heilige Johanna (1923). Shaw was a writer well into the old age of 90. In the last creative period (1930–1949) he paid more and more attention to political problems and merged fantastic and satirical elements.

As a representative of intellectual theater , Shaw created a new type of drama - the discussion drama , whose heroes clash as bearers of certain ideologies . Shaw's main interest is not the plot, but the clash of opinions, the discussions about philosophical, moral, political problems that his heroes lead. Shaw often resorts to satirical exaggeration and the grotesque, his heroes are not infrequently eccentric. In 1925 Shaw received the Nobel Prize “for his work, which is based on both idealism and humanity, in which fresh satire is often combined with a peculiar poetic beauty”.

Shaw's destruction of conventional forms of drama such as well-made play , melodrama , farce or historical drama is just as characteristic of Shaw's dramatic work . He uses quotes from these genres of drama and uses them to generate a fore-pleasure in order to then show the viewer their lack of reality through inversions and disillusions. For example, Shaw's first drama Widowers's Houses (1892) was created based on a scenario designed by William Archer in the style of well-made play . Shaw, meanwhile, consumes the fable with the second act and in the third act lets a discussion and analysis of the social contexts and causes of the events depicted follow. Shaw remains true to this approach in his extensive dramatic oeuvre: the idealistic disguised motifs and illusions of the characters and actors are confronted with reality and thus made conscious as such. In the 1890s, however, Shaw's understanding of reality changed from a sociologically founded concept of reality to a biological-religious one after the turn of the century. His dramas change from realistically oriented pieces to utopian-visionary ones: Widowers's Houses and Mrs. Warren's Profession (written in 1893 ) contrast with the parable Back to Methuselah (1922).

In Shaw's conception of the drama, form and style no longer form independent meanings, but are subordinated to the purpose of analyzing reality and convincing the viewer. In contrast to conventional views, Shaw uses his own comprehensive biological and socio-political knowledge in a rhetorically accurate and at the same time witty form, on whose persuasiveness he trusts. In this regard, together with Bertolt Brecht , he founds an enlightening, didactic form of modern theater that intends to steer a changing world in the “right” direction by criticizing prejudices and reconstructing reality. A mere documentary or photographic representation of social conditions would neither do justice to such an intention nor to the increasingly complex social conditions. In order to uncover the problems in the relationship between humans and the environment, which also includes the social and cultural structures created by humans, Shaw primarily uses the parable or parable.

This construction is intended to reveal the truth that is hidden behind the social and linguistic-rhetorical surface. With the help of discussions of ideas, montages and provocative allegorical reinterpretations, Shaw tries to dissolve traditional myths such as heaven , hell , paradise or the fall of man and traditional literary motifs such as St. Joan or Don Juan in order to provoke a shock of knowledge in the audience. In Back to Methuselah , for example, the fall of Adam and Eve is by no means a misfortune. Rather, the emergence of sexuality, reproduction and death opens up a spectrum of possibilities to escape the unbearable boredom of eternity without endangering the continued existence of the human species.

Shaw's correspondence with Stella Patrick Campbell was also staged as a drama by Jerome Kilty entitled Dear Liar: A Comedy of Letters . His letters to the famous actress Ellen Terry have also been published and adapted as a play. His letters to H. G. Wells and to Gene Tunney are also published. His close friend and antagonistic discussion partner was Gilbert K. Chesterton , whose Catholic criticism of capitalism he valued as much as his sharp wit and who published a biography of him in 1909.

Because of his anger with the English orthography , he donated part of his fortune to the creation of a new English phonetic alphabet, which was designed in the course of a competition by Ronald Kingsley Read and is named after the initiator Shavian alphabet ("Shaw alphabet"). While Shaw was alive, the only expression of his considerable fortune was a Rolls-Royce .

In the last few years of his life he loved to be around his home and garden at Shaw's Corner to stay and tend the garden. He died of kidney failure (caused by the fall of a tree on him) at the age of 94 . On November 6, 1950, he was cremated at Golders Green Crematorium in London . His ashes, mixed with Charlotte's, were scattered in the garden on the sidewalks and around the statue of Saint Saint Joan , about which he had also written a drama in 1923.

Before his death, Shaw's name was known far beyond the British Isles. Shaw was the only Nobel Laureate to receive an Oscar until 2016, when Bob Dylan was also awarded the Nobel Prize for Literature. He received the Oscar in 1939 for the best screenplay for the film adaptation of Pygmalion under the title Pygmalion: The novel of a flower girl . Since 1943 he was an honorary member of the American Academy of Arts and Letters .

Shaw took an active part in politics throughout his life. From 1897 he was a council member in the St. Pancras district in London for years . He is one of the creators of the founding program of the British Labor Party in 1900. At the beginning of the First World War, he published a large article in 1914 in which he called the United Kingdom and Germany to negotiate and criticized blind patriotism . He remained a staunch opponent of the war during and after World War I.

In 1931 he met Mahatma Gandhi in London , who was there to negotiate with the British government. In March 1933 he traveled to Japan and expressed himself very critical of the Japanese hegemony policy in China (→ Second Sino-Japanese War ) in a conversation with the Japanese Army Minister Sadao Araki :

“The European was imperialistic, yet it led to the disappearance of three empires. Have you in Japan ever thought that in your imperialistic aims you may end as a republic, and that is not at all what your rulers want? […] If you had been born in Russia, you would have become a politician greater than Stalin […] I would like to stay here talking to you until the Chinese land on the Japanese mainland. ”

“The European War was imperialist, but it led to the disappearance of three empires. In Japan, did you ever think that your imperialist goals might end up being a republic, which is not necessarily what your rulers want? […] If you were born in Russia, you would have become a bigger politician than Stalin. [...] I would like to continue chatting with you here until the Chinese land on the Japanese heartland. "

Shaw also traveled to the Soviet Union in the 1930s . His works were published there with the help of Artemi Chalatow . In the foreword to the play On the Rocks (1933) he defended the forced collectivization in the Soviet Union . At the height of the Great Depression in 1931, he made a US radio broadcast calling on every able worker to travel to the USSR. Defending the Stalin purges, Shaw declared:

"We cannot afford to give ourselves moral airs when our most enterprising neighbor [that is, the USSR] humanely and judiciously liquidates a handful of exploiters and speculators to make the world safe for honest men."

"We cannot afford to behave highly morally when our bold neighbor [the Soviet Union, note] liquidates a handful of exploiters and speculators in a humane and fair manner in order to protect the world for the decent."

Shaw was a believer in eugenics and advocated government and educational measures in reproduction to improve genetic makeup.