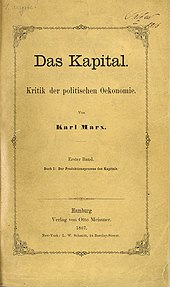 Title page of the first edition, 1867

The capital. Critique of Political Economy , one of Karl Marx's main works, is an analysis and critique of capitalist society with far-reaching effects in the labor movement and the history of the 20th century. Karl Marx's personal edition of “Kapitals” ( first volume ) with his handwritten notes was included in the world register of document heritage by UNESCO inJune 2013at the joint proposal of the Netherlands and Germany . The writing is kept in the International Institute for Social History in Amsterdam.

The three volumes of Capital , as they exist today in MEW volumes 23 to 25 and in most of the translations, were edited and edited to varying degrees by Marx himself and above all by Engels. They appeared in partially revised editions during Marx and Engels' lifetime. Marx's personal edition of the first volume has been included in the Unesco World Document Heritage .

The first volume of the capital appeared in mid-September 1867 with the Hamburg publisher Otto Meissner in an initial edition of 1000 copies (publication of the publication in the Börsenblatt für den Deutschen Buchhandel on September 14, 1867) based on the economic manuscripts (1863-65). Between December 1871 and January 1872 he wrote additions and changes to the first volume of Capital , which contained revisions and comments on the first chapter of the first edition - above all, fundamental considerations on the theory of value. The second edition of the first volume appeared in 1872/73. There were significant changes, especially in the first chapter on goods.

Marx worked on a French edition of the first volume for five years; This translation activity stimulated him to revise parts of the material and to reconsider it. Above all, he added the section on “accumulation”. The French edition was published 1872–1875, initially in individual deliveries, then in 1875 as a book.

In 2017 Thomas Kuczynski brought out a new text edition based on previously unprocessed references from Marx. This applies above all to the comparison of the German with the French edition.

In 1885 Engels published the second volume of Capital , in which he had compiled various manuscripts of Marx that he had written in the 1860s and 1870s. The book was printed by the Reusch printing company in Leipzig, using the handwritten manuscript from Engel's secretary Oscar Eisengarten as a template for the publisher Otto Meissner .

The third volume followed in 1894, which only contained a manuscript by Marx from 1864/65 as a basis and was provided with numerous reformulations and adjustments by Engels.

Evaluation of the revisions

While in traditional Marxism the "perfecting thesis" was assumed, according to which the later versions were to be regarded as continuous improvements of the earlier ones, the " New Marx Reading " is based on a "popularization thesis", according to which the later editions usually popularizations and thus also Show simplifications to previous editions.

The "Blue Volumes" of the Marx-Engels-Werke (MEW), Dietz Verlag Berlin, 1973

In the capital is not about "society par excellence" or " 'the' human economies", but a very special form of society and a very special form of economic activity is analyzed: The " Critique of Political Economy " - as the subtitle of the work - is for the fundamental criticism of both the capitalist mode of production in the 19th century and the established bourgeois theory of the same ( economics , especially economics ) at the time of Marx.

Marx's criticism shows that societies with a capitalist mode of production are class societies in which private ownership of the means of production increases through the use of wage labor . Wealth accumulates in the form of capital, while its producers are permanently excluded from it: according to Marx, the workers only participate in wealth insofar as the use of their labor makes their wages necessary .

Second, capital is directed against political rule, which places its power entirely at the service of capital and legally safeguards the dependence of the working class on private property.

Marx claims that these are man-made relationships. Nevertheless they worked behind the backs of the members of society, appeared to them as intrinsic material necessities; their character as 'relationships of persons' is veiled. Marx calls this a commodity fetish in analogy to religious imaginations .

Volume 1: The production process of capital

Volume 2: The circulation process of capital

After Marx's death in 1883, Friedrich Engels completed Das Kapital with volumes 2 and 3 from his manuscripts . His interpretation is controversial.

In the first volume was the subject of how the value in individual industrial capital produces is. But this has yet to exchange - in the sphere of circulation - realized be. This results in different phases in which capital must find itself: the production and the circulation phase. In the second phase, various individual capitals relate to one another; the form of these relations is the subject of the second volume of Capital . The investigation of these relationships leads to the question of how the reproduction of society proceeds under the demand for constant accumulation of surplus value.

In chapter 48, The Trinitarian Formula , Engels, as editor, has compiled several fragments in which Marx summarizes some of the most important aspects of all capital. I.a. briefly describes the stages of the concealment of the exploitation of the workers by capital. 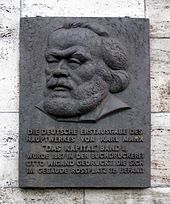 In work or complete editions

The works of Karl Marx and Friedrich Engels